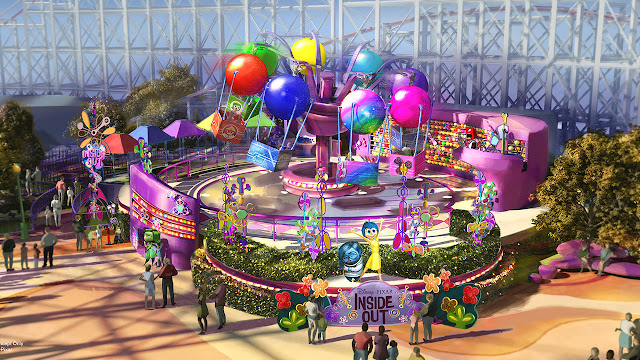 The Disneyland Resort has announced "Inside Out Emotional Whirlwind" for the Inside Out Headquarters neighborhood of the recently opened Pixar Pier. Located in the part of Disney California Adventure park that was previously known as Paradise Pier, this new flat ride will bring the Inside Out movie franchise to life for guests to enjoy! The ride will compliment the three new neighborhoods that are already open in Pixar Pier (Incredibles Park, Toy Story Boardwalk, and Pixar Promenade). This new family attraction is scheduled to open in 2019 along with the previously announced "Jessie's Critter Carousel" attraction in Toy Story Boardwalk.

That's all for now from Theme Park Overload! Make sure to "Like" our Facebook page to get the latest updates from all of your favorite parks delivered straight to your newsfeed! Facebook.com/ThemeParkOverload My name's Nicholous, and Thanks for Reading!
Location: 1313 Disneyland Dr, Anaheim, CA 92802, USA