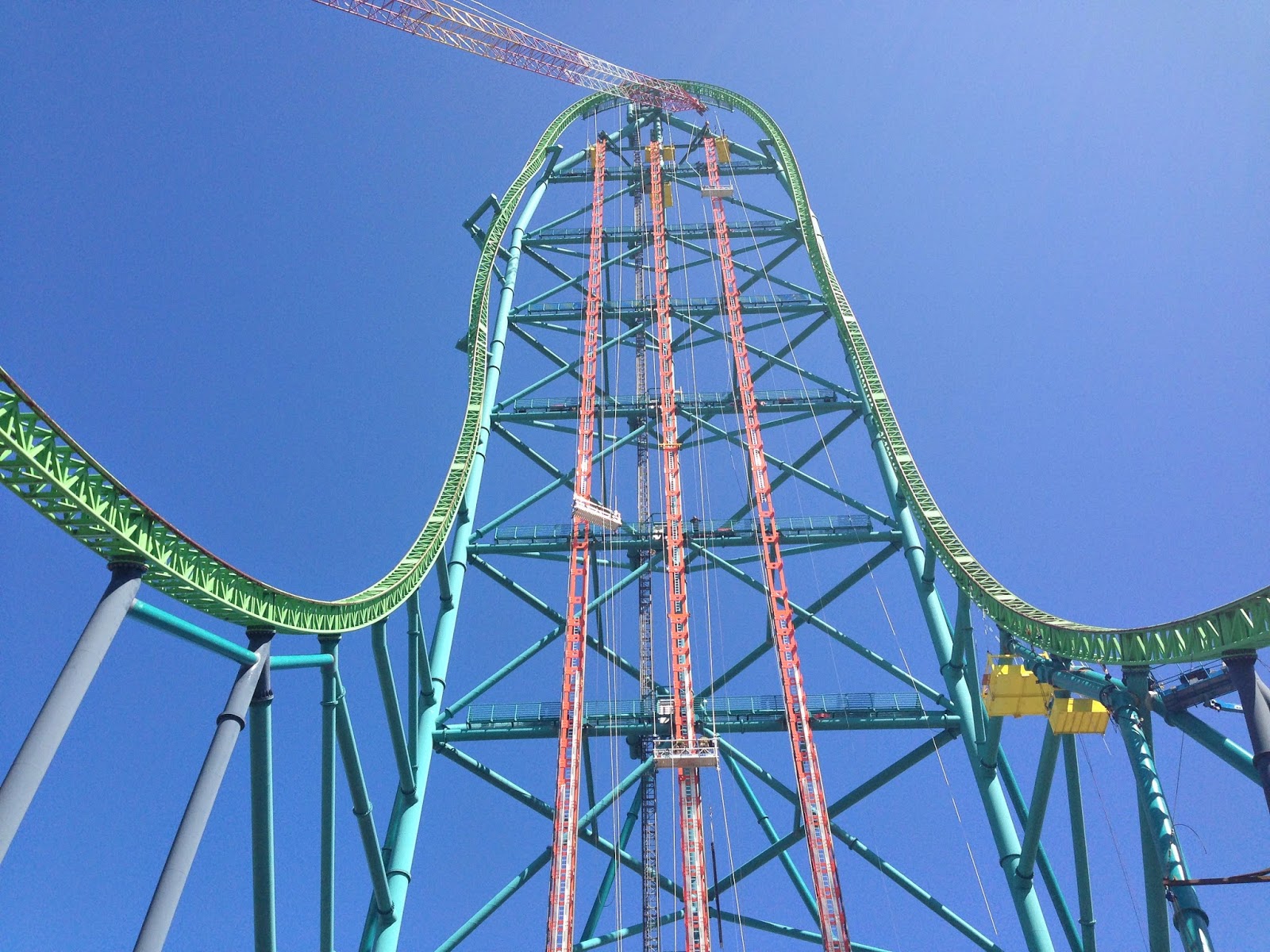 The World's Tallest Drop Tower has been officially "topped off" today, as Six Flags Great Adventure installed the final track piece to the new Zumanjaro: Drop of Doom tower ride! Rising 41 stories into the New Jersey sky, Zumanjaro will be the tallest and fastest drop tower in the world at 410 feet and 90 MPH. Construction Crew workers signed the final piece before a towering crane lifted it into place. Check out the video below from our YouTube Channel ThemeParkOverloadHD!

Here's the official Press Release from the park from earlier today:

The final track piece of Zumanjaro: Drop of Doom was placed today at approximately 1:30 pm today. This “topping off” officially breaks the world record for tallest drop ride, with Zumanjaro’s three towers completed at a staggering 41 stories tall. The mammoth drop ride is expected to open at Six Flags Great Adventure this Memorial Day weekend.

Iron workers from Shamrock Construction, the ride’s erection company which is based in Matawan, New Jersey, signed the final orange piece of steel before it ascended to its final resting place atop Kingda Ka’s 45-story tower.

“Today is special because we not only broke the world record by topping off the world’s tallest drop ride, but also because we battled through some incredibly adverse weather conditions. We had the coldest and snowiest winter that any of us can remember,” said John Fitzgerald, park president at Six Flags Great Adventure. “We appreciate the hard work by Shamrock Construction and the rest of the construction team in overcoming those conditions and getting the job done,” he added. “You would not believe how windy it can get up there in a snow storm.”

Following the topping off, the construction, maintenance and engineering teams will focus on installing the lift mechanism (a winch and cable system),  adding the three gondolas that will whisk riders to the top of the tower and installing the ride controls, followed by extensive ride testing, inspections and certification before the first passengers board the ride later this spring.

Connected to the iconic Kingda Ka roller coaster—the 456-foot monster that ranks as the world’s tallest coaster and fastest in North America—Zumanjaro: Drop of Doom will hoist riders 41 stories into the sky and rocket them back to Earth at 90 miles per hour while Kingda Ka trains launch right toward them at speeds of up to 128 miles per hour. Riders will pause for a few terrifying moments 41 stories in the air—even higher than London’s Big Ben and twice as tall as the Statue of Liberty—allowing them to catch a glimpse of the skyscrapers in Philadelphia 52 miles to the south before gravity plunges them back to ground level in less than 10 seconds.

This ride looks insanely fun, and we can't wait to see it dropping its first riders in just 2 short months! That's all for now from Theme Park Overload! Make sure to "LIKE" our Facebook page to hear the latest rumors and coaster news FIRST! www.Facebook.com/ThemeParkOverload My name's Nicholous, and Thanks for Reading!