December 08, 2018
Today we're bringing you a construction update from Six Flags Magic Mountain's next thrill ride, West Coast Racers, as well as a look at the park's winter event, Holiday in the Park! Let's jump right in. 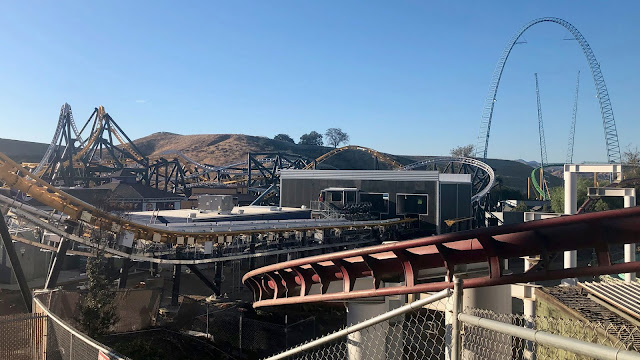 First, we'll be checking out the current state of West Coast Racers, as well as the new area around it, which will be called "The Underground". Notice anything interesting on the track? 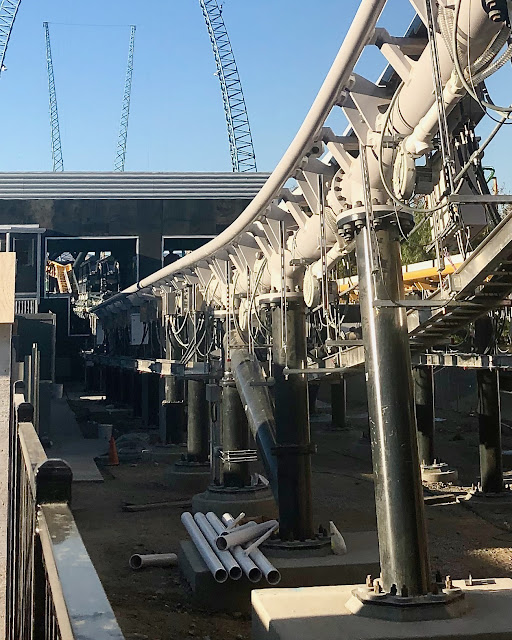 Your eyes don't deceive you - we have a West Coast Racers train on the track! Better yet, the ride has started testing. Although the coaster didn't cycle during our visit, videos have surfaced online of the ride testing at what looks like full speed. 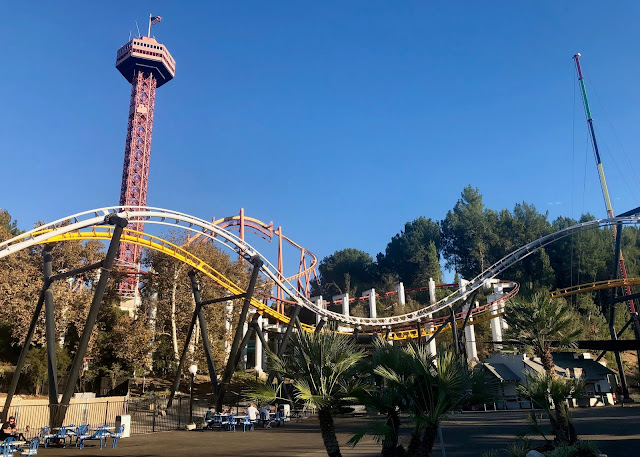 Around half of the area that will be known as "The Underground" is currently open to the public. Right now, the area is only accessible via the walkway starting near Tatsu; the walkway beginning by Jet Stream is still closed off as construction on the coaster finishes up. 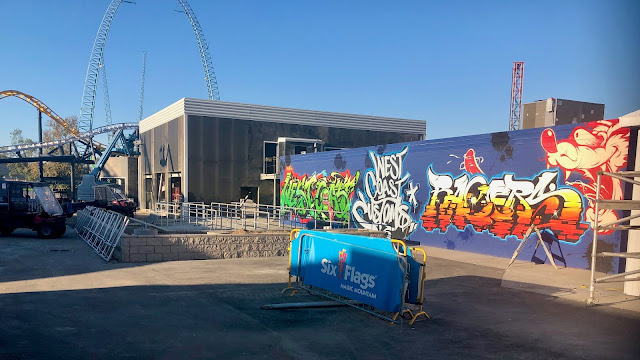 Although the accessible areas look fairly finished, peeking over the construction walls doesn't give quite the same impression. Even if the coaster hardware itself is nearly done, this area, including the station and queue, appear further behind. Judging by this view, it seems very unlikely that the coaster will be open by the end of 2019. 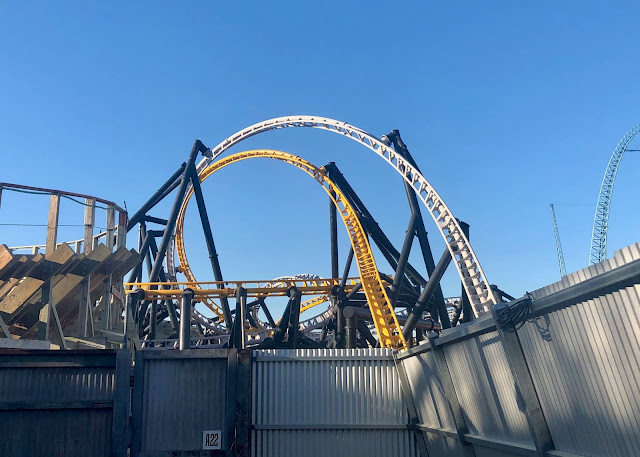 More of West Coast Racers is visible from Apocalypse's queue. 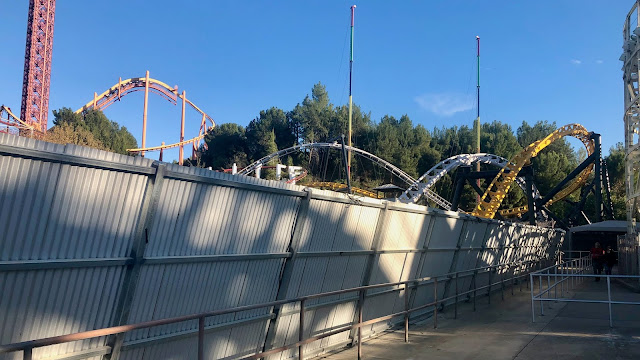 Interestingly, this fence along the queue of Apocalypse had to be modified to allow clearance for West Coast Racers' final launch. Yes, the fence is supposed to be leaning like that. 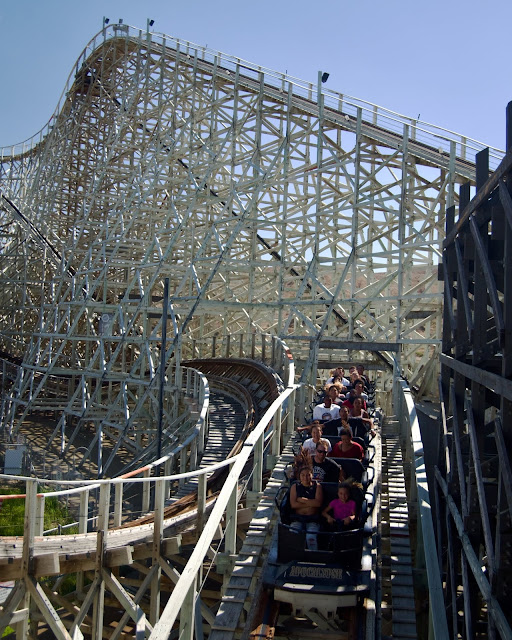 West Coast Racers might not be operational currently, but Apocalypse is! This coaster was running phenomenally during our visit. The lengthy re-tracking process was worth the wait - the ride isn't exactly glass smooth, but it is much more enjoyable than it was the last time I rode it. 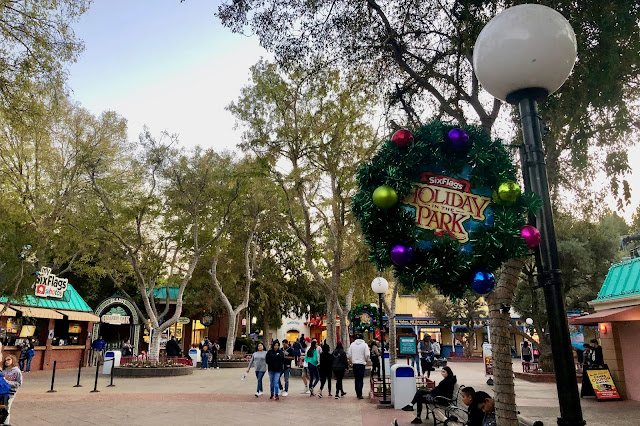 Moving on to Holiday in the Park! Six Flags advertises this as a nighttime event, running from 5 pm to closing during our visit. As such, the daytime decorations are not too spectacular. However, as night falls and the lights start turning on, the event really is something special. 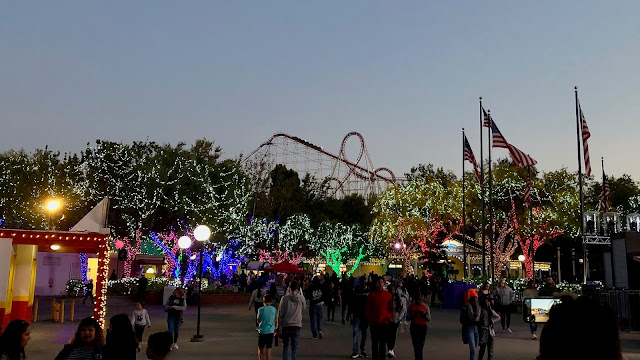 At dusk, it becomes clear just how many lights the park has strung throughout trees and buildings in certain areas, like in the entrance plaza seen here. 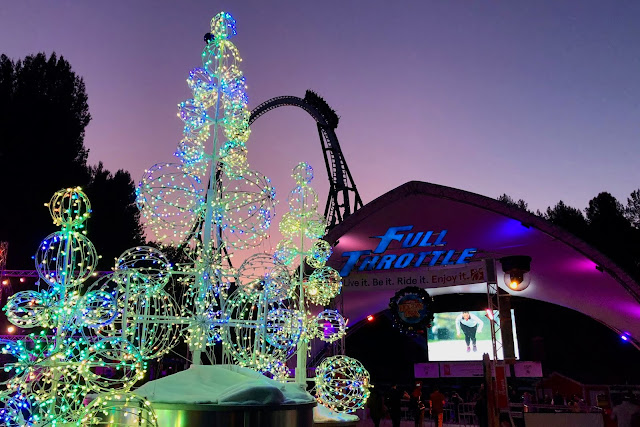 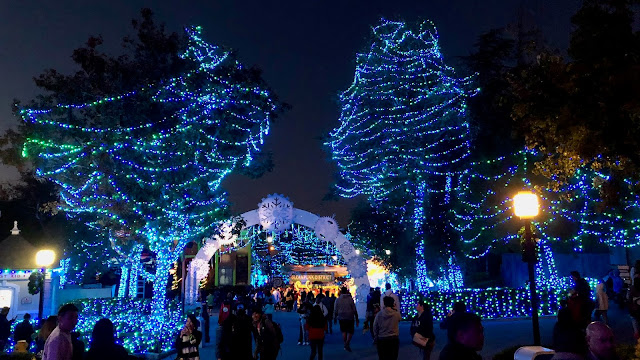 The "Gleampunk District" (as it's known during Holiday in the Park) is lit up with blue and green lights - the colors of Twisted Colossus. 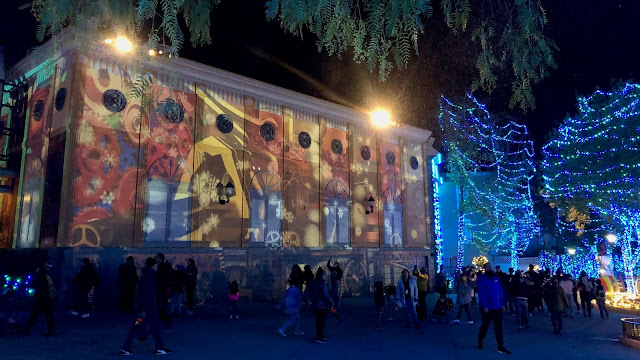 Projections on the theater as well as fake snow really add to the atmosphere here. 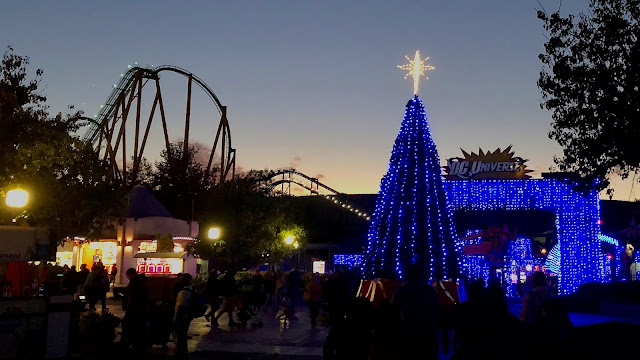 All the lights in DC Universe are color-changing LEDs that sync up with Christmas music every ten minutes or so, in a mini show! 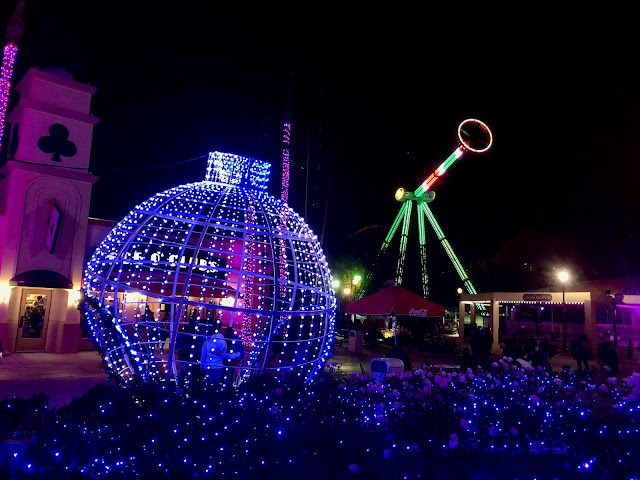 A few giant Christmas ornaments like this one are scattered between The Riddler's Revenge and Crazanity. They also change color as music plays. 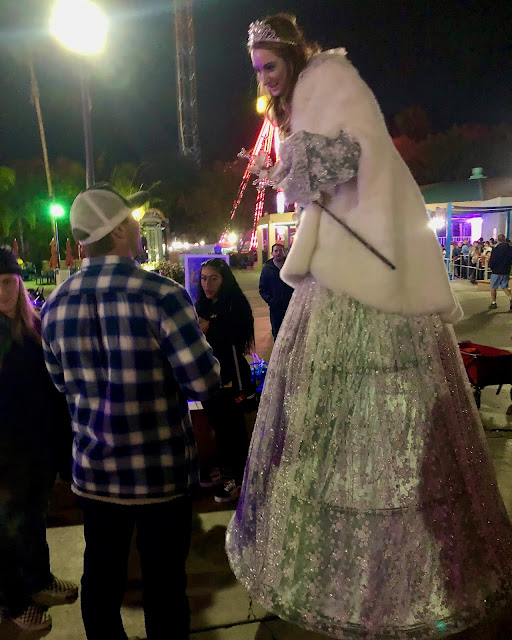 Multiple characters on stilts, like this snow queen, roam the park and interact with guests. We figured the stilts are left over from Fright Fest, but it seemed kind of odd for the characters to be so gigantic when they are not trying to scare anyone. 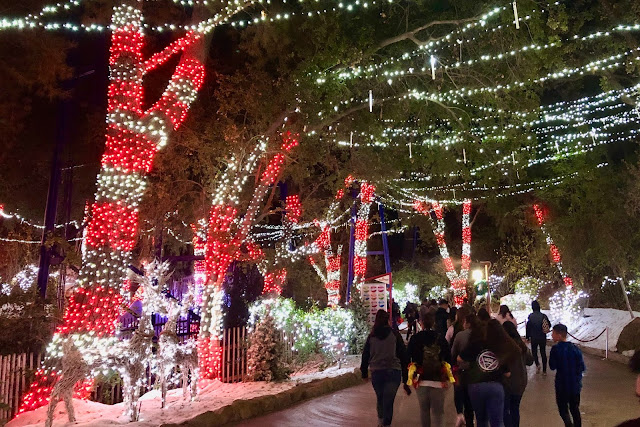 The trees by Revolution and Tatsu are also quite well decorated. Artificial snow falls here as well. 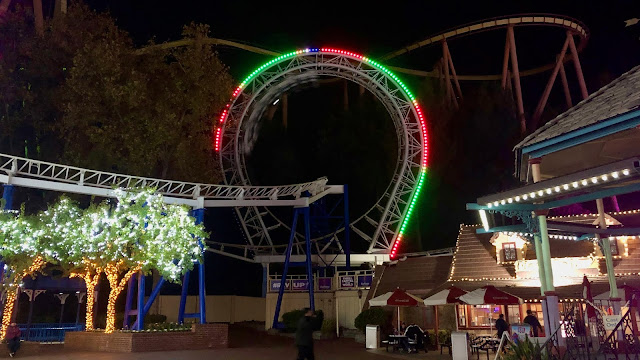 Revolution's loop is lit up green and red for Christmas! 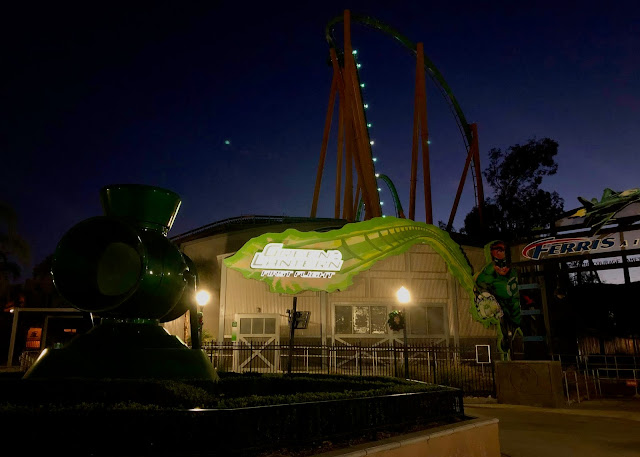 Before we finish up, there is one more thing you may be curious about. Green Lantern has been completely deconstructed, with some pieces being shipped off to Canada and others still laying under The Riddler's Revenge. The station, however, is still standing, and the preshow audio still plays in the queue for some reason! What will happen to this area in the future remains to be seen... 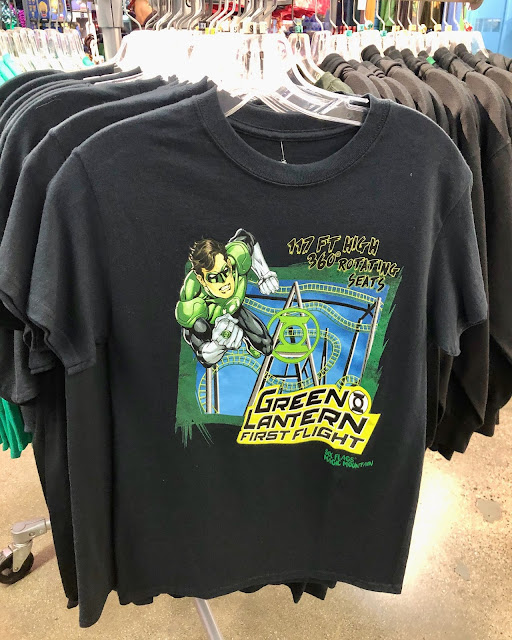 ...but for now, fans of the ride can still purchase Green Lantern t-shirts in the gift shop! 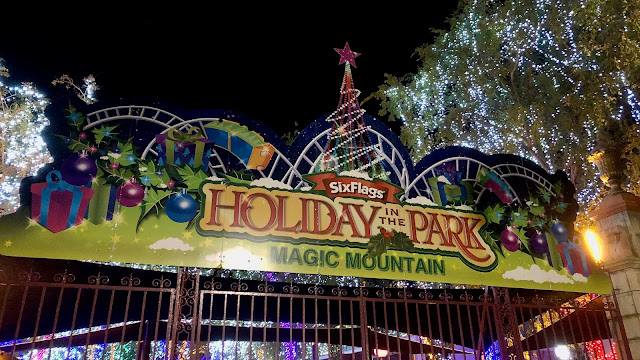 That's going to do it for our Six Flags Magic Mountain Update! We hope you enjoyed reading. Even if their new coaster is still not ready, Magic Mountain puts on a pretty impressive Christmas event that is worth checking out. Be sure to "LIKE" our Facebook page to get breaking news updates and exclusive content delivered straight to your newsfeed! Facebook.com/ThemeParkOverload My name's Harris, and thanks for reading!
Location: 26101 Magic Mountain Pkwy, Valencia, CA 91355, USA
Harris Lanum
Harris Lanum is an undergraduate student at UCLA, studying Civil Engineering. A SoCal native, Harris has grown up visiting theme parks and plans to pursue a career in the amusement industry.