July 04, 2019
Today we're headed to Knott's Berry Farm for a look at the park's new-for-2019 addition: Calico River Rapids! We'll show off the new theming and give some thoughts on what this latest incarnation of Knott's river raft ride does well - and what it could do better. 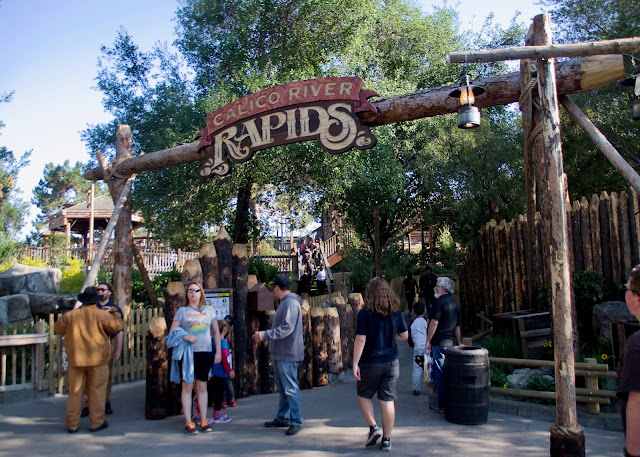 Calico River Rapids takes guests through the wilderness just outside the town of Calico, where a rushing river flows through uncharted land. Let's see what kind of adventure awaits explorers beyond Calico! 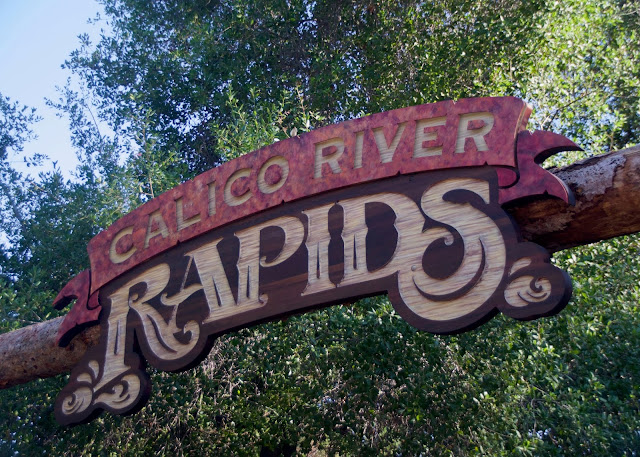 Guests walking toward the ride entrance are greeted by this large sign, as well as large, rustic-looking wooden walls that isolate the ride trough from the rest of the park. 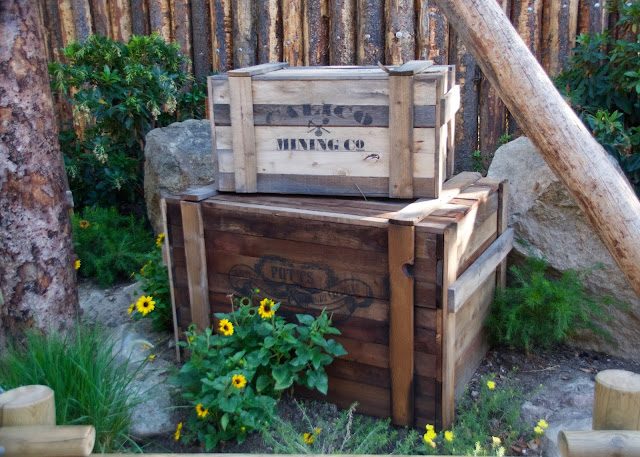 Those familiar with the former BigFoot Rapids will immediately notice differences between the past and current attraction. More foliage has also been planted, giving the area a much more secluded and woodsy feel that will only improve as the new trees grow in. The main entrance is much more grand, and the queue is filled with new theming and details, such as these boxes from the Calico Mining Co. from across Ghost Town. 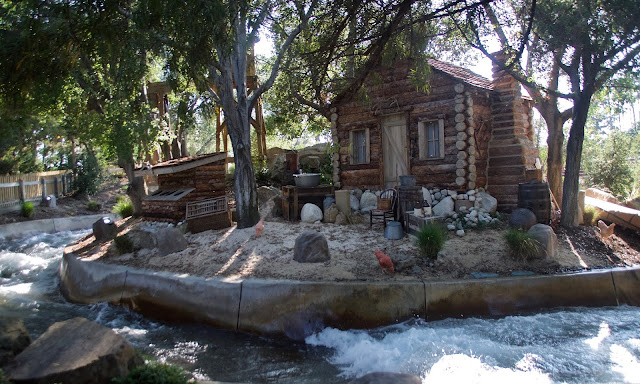 The queue winds through the ride area, giving future rafters views of what lies ahead. This is one of many cabins riders float past during their adventure. 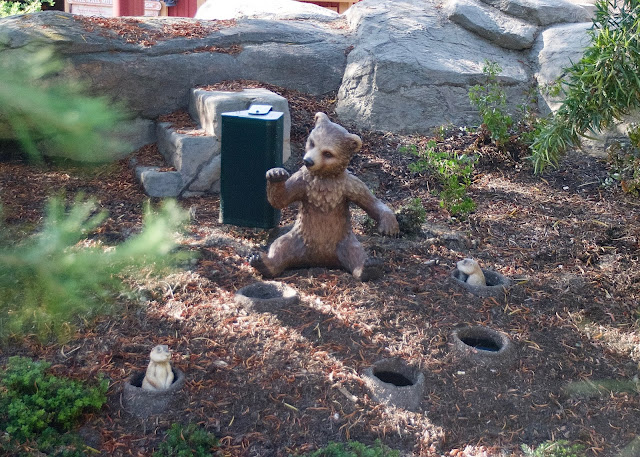 The queue also passes many of the animatronic vignettes that riders will later briefly see from their rafts, often giving much better views than will be visible from the ride itself. 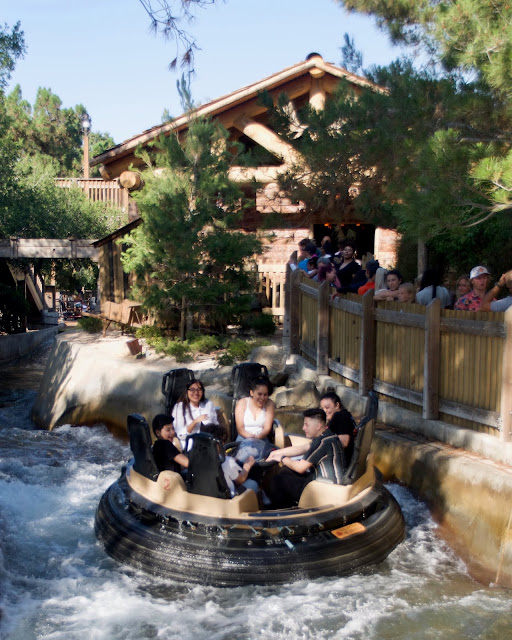 After winding through the woods, explorers find themselves entering a large log cabin. This themed indoor queue is a welcome upgrade from the standard queue switchbacks formerly in this area. 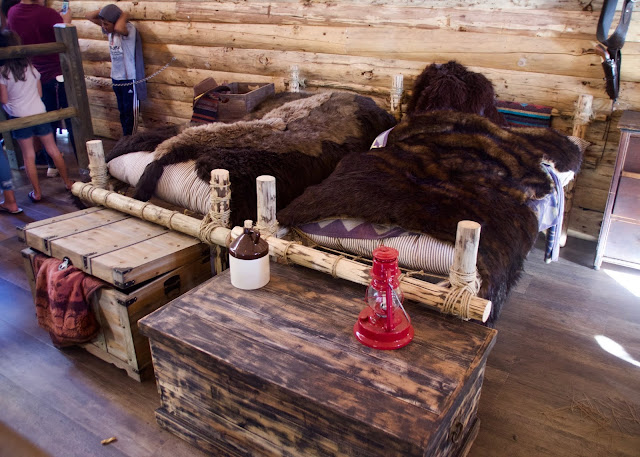 Inside, things are realistically furnished. I heard people joking that the trapper's cabin looks like someone could actually live in it - and it's true! 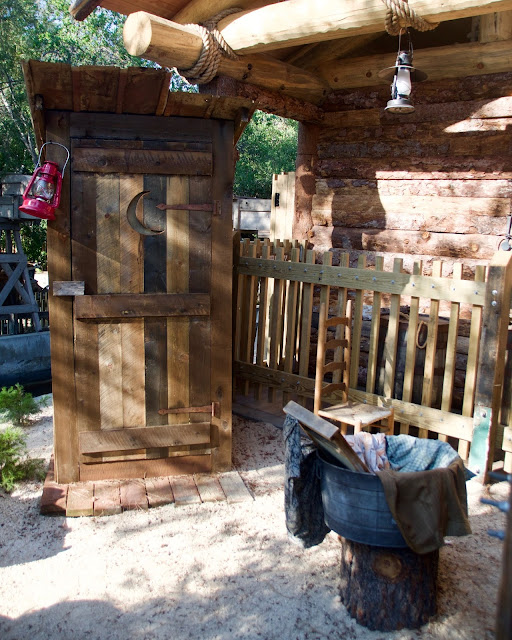 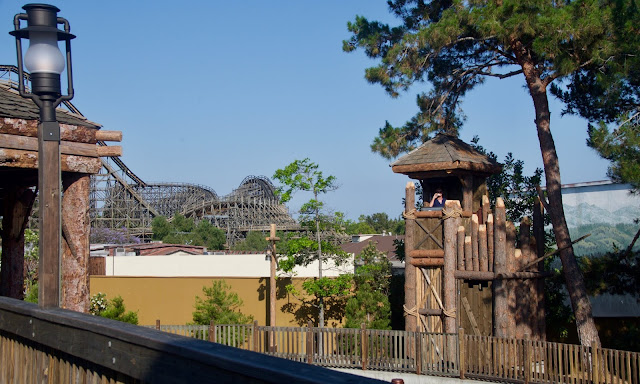 After all that, it's finally time to board a raft and begin the adventure. The loading area is fairly standard for a river rafting ride, but the ride operator towers have been redone in a woodsy style. Also of note are the views of GhostRider! 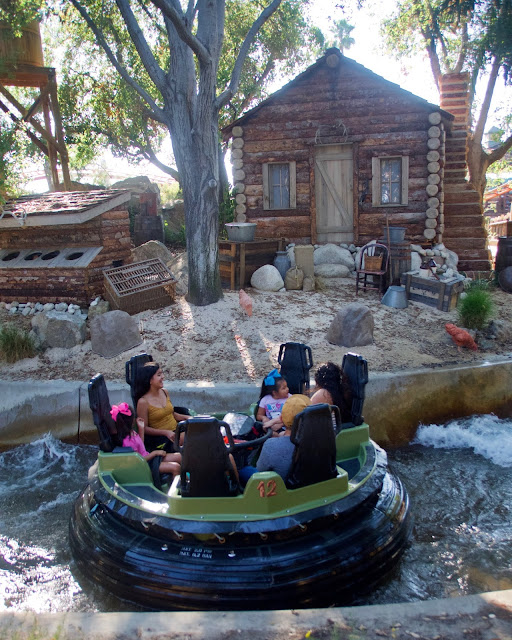 The ride itself is still a fairly standard white water rafting ride for the most part - which is not to say it isn't fun. However, most riders are much more engrossed in the thrills - and splashing water! - of the rapids than they are in the animatronics and storytelling going on around them. 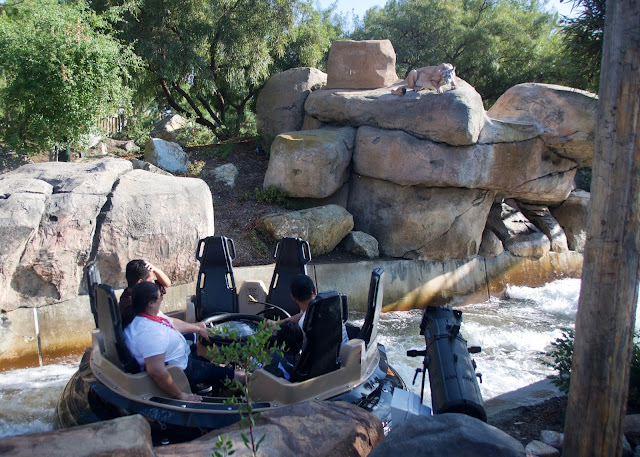 To put it simply, the rafts are moving too fast for riders to notice most of the theming! 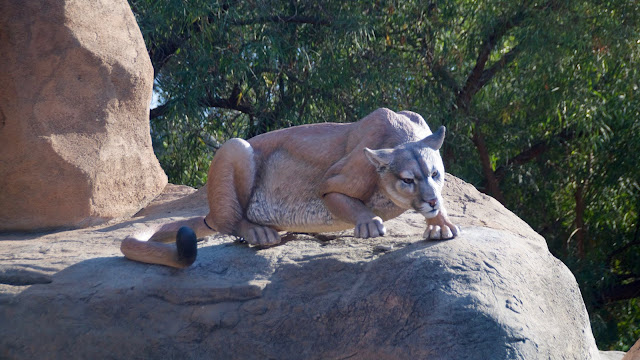 I don't remember actually seeing this guy on the ride, but he looks cool from the pathway. 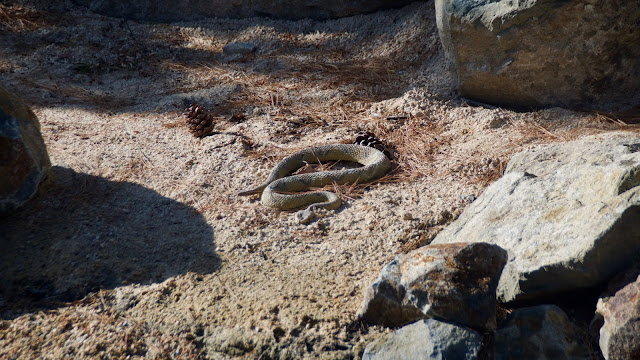 To make matters worse, the scenes are almost too realistic. This snake is life-sized...which also means that it's really small! I had a hard enough time seeing and photographing it from the queue, much less noticing it from the ride. Some larger figures here would be nice, even if it might take away from the realism a bit. 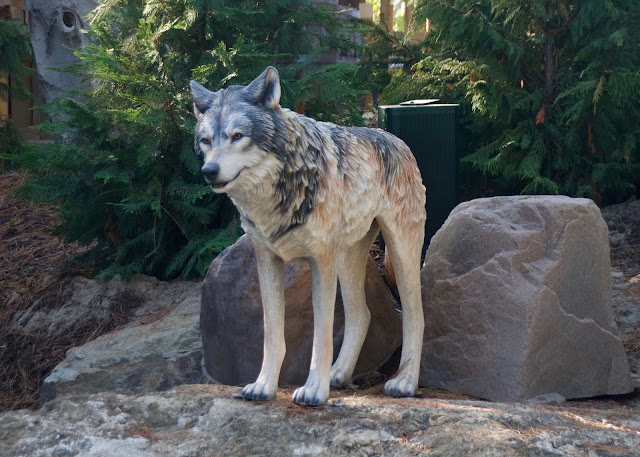 Most of the animatronic figures are quite basic in their movements. This is excusable in most places, where passengers are moving too quickly to notice detailed animation. 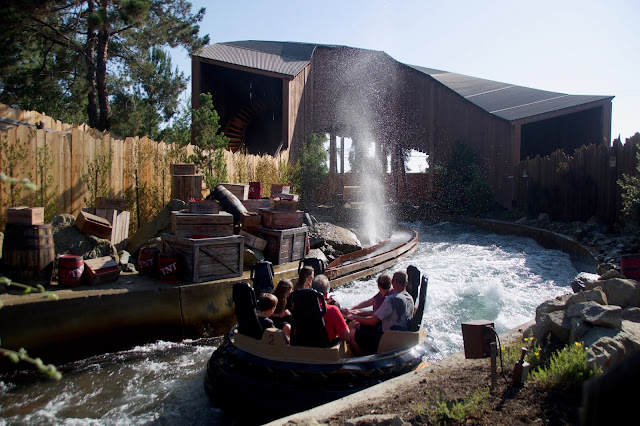 Toward the end of the ride, rafters pass by these boxes of TNT and, of course, guest-controlled geysers. You don't have to pay to set these geysers off, and they give riders more of a mist than the full-on soaking you can get at some parks. Even better, the geyser triggers come with a surprise for those standing behind them. Every once in a while, the boxes of TNT will squirt water back at the path, onto onlookers - adding risk to the usually safe role of soaking riders from a distance. 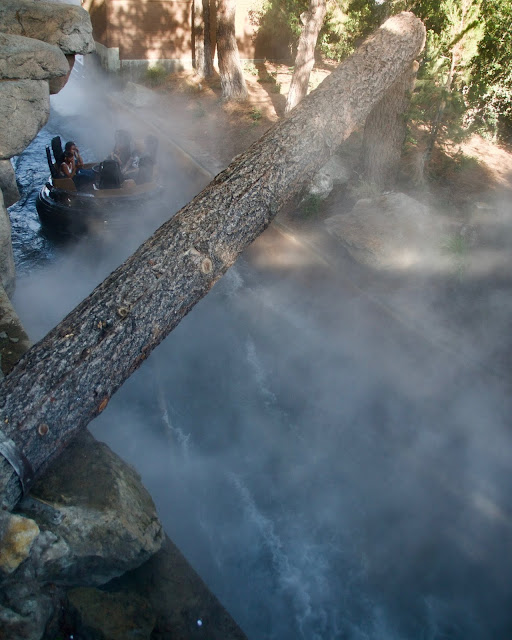 The finale of the adventure takes riders into a cave - which has been substantially extended from the former BigFoot Rapids tunnel, and filled with lots and lots of fog. Inside the cave lurks the ride's largest animatronic figure. Despite his size, Bigfoot suffers from the same problems as the rest of the ride. Half of my ride vehicle didn't even notice him between the rapid speed of the raft and copious amounts of fog obscuring the animatronic. To add insult to injury, the figure didn't move at all during our ride. I'm not sure if this was just due to the relatively static nature of the rides' animatronics or if Bigfoot is already broken. It certainly reminded us of a certain other large, hairy, inanimate animatronic down in Florida somewhere... 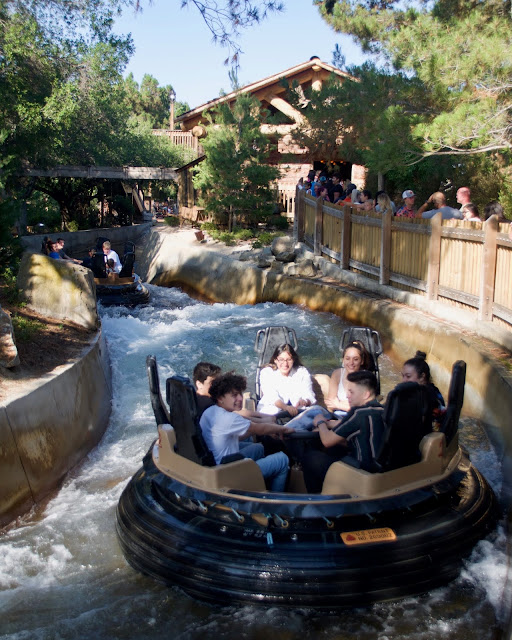 To wrap things up, Calico River Rapids is, overall, a good attraction, and certainly an improvement over what was there before. It has gone from a ride that I would almost never ride at Knott's to one I see myself reriding in the future. The queue experience has been drastically improved, going from a fairly unthemed, hot trek to the loading platform to a nicely shaded path surrounded by woodsy theming. The ride itself has been improved in that it is now much more atmospherically secluded from the rest of the park. The animatronics, while sometimes hard to see, add to the attraction's rerideability; next time I visit, I fully expect to find something I didn't notice the first time. While not perfect, Calico River Rapids succeeds in adding another immersive attraction to Knott's Berry Farm's lineup, an impressive feat when you consider that 2019 was more of an "off-year" for the park.

Well there you have it, TPO's review of Calico River Rapids at Knott's Berry Farm! Get out to Buena Park, ride it for yourself, and tell us what you think! Also, be sure to "LIKE" our Facebook page to get Breaking News Updates and Exclusive Content delivered straight to your newsfeed! Facebook.com/ThemeParkOverload My name's Harris, and thanks for reading!
Location: 8039 Beach Blvd, Buena Park, CA 90620, USA
Harris Lanum
Harris Lanum is an undergraduate student at UCLA, studying Civil Engineering. A SoCal native, Harris has grown up visiting theme parks and plans to pursue a career in the amusement industry.