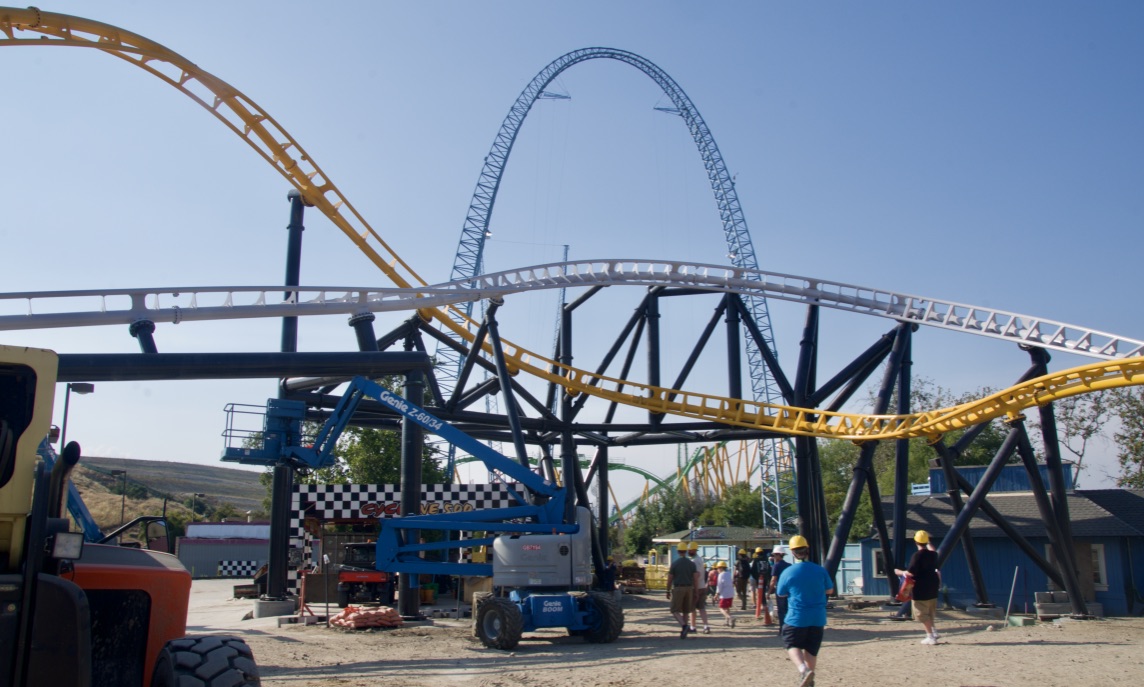 This week, as part of Coaster Con 42 at Six Flags Magic Mountain and Knott’s Berry Farm, I was able to take a behind-the-scenes hard hat tour of West Coast Racers, Magic Mountain’s latest thrill coaster, slated to open sometime this year. This ride will be a quadruple LSM launch, quasi-mobius dueling coaster from Premier Rides and will be totally unique. Let’s get started on this West Coast Racers construction update! 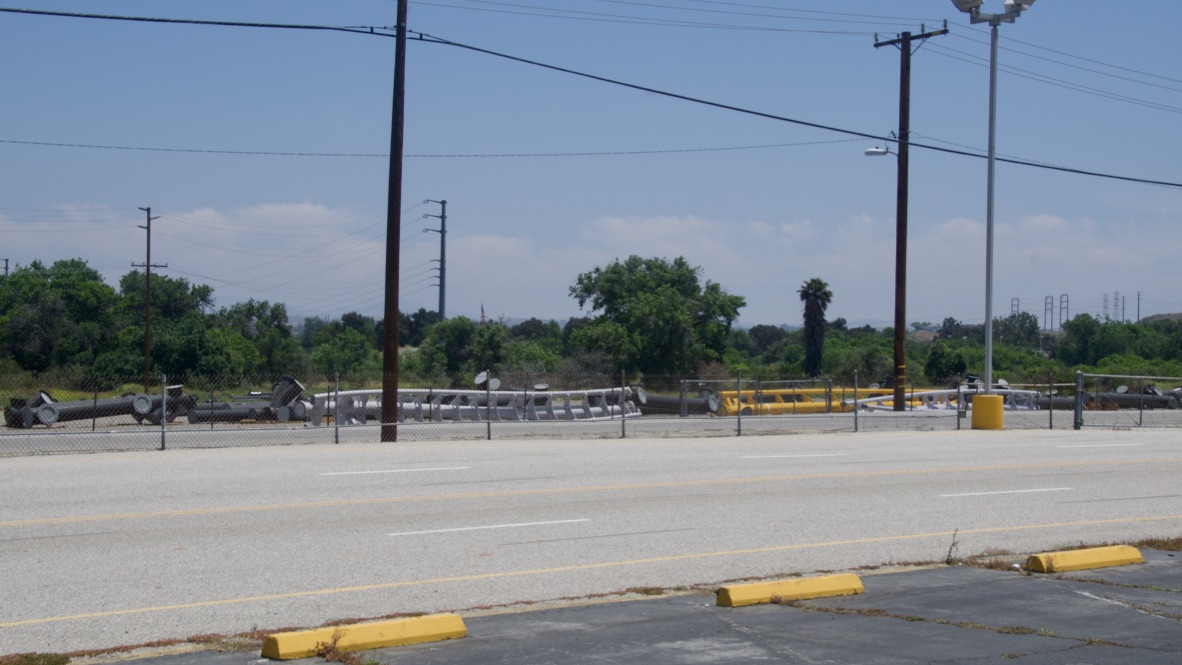 There is visible evidence of the new ride before even entering the front gate.
Lots of track and support poles are visible across the street from the parking lot. 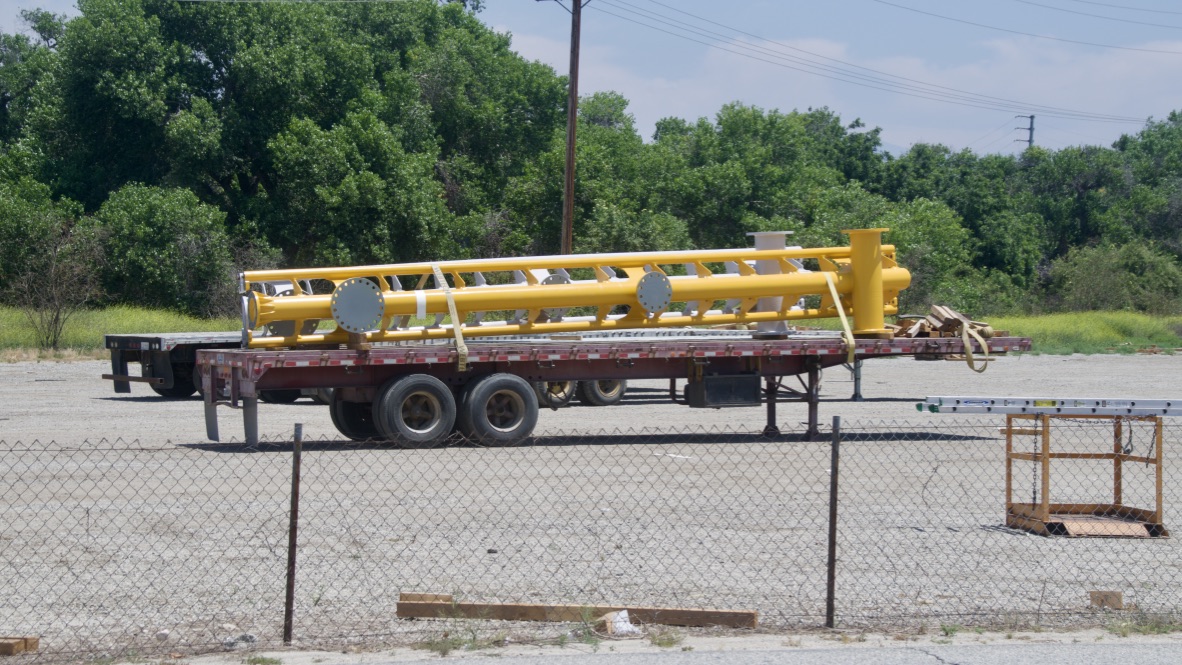 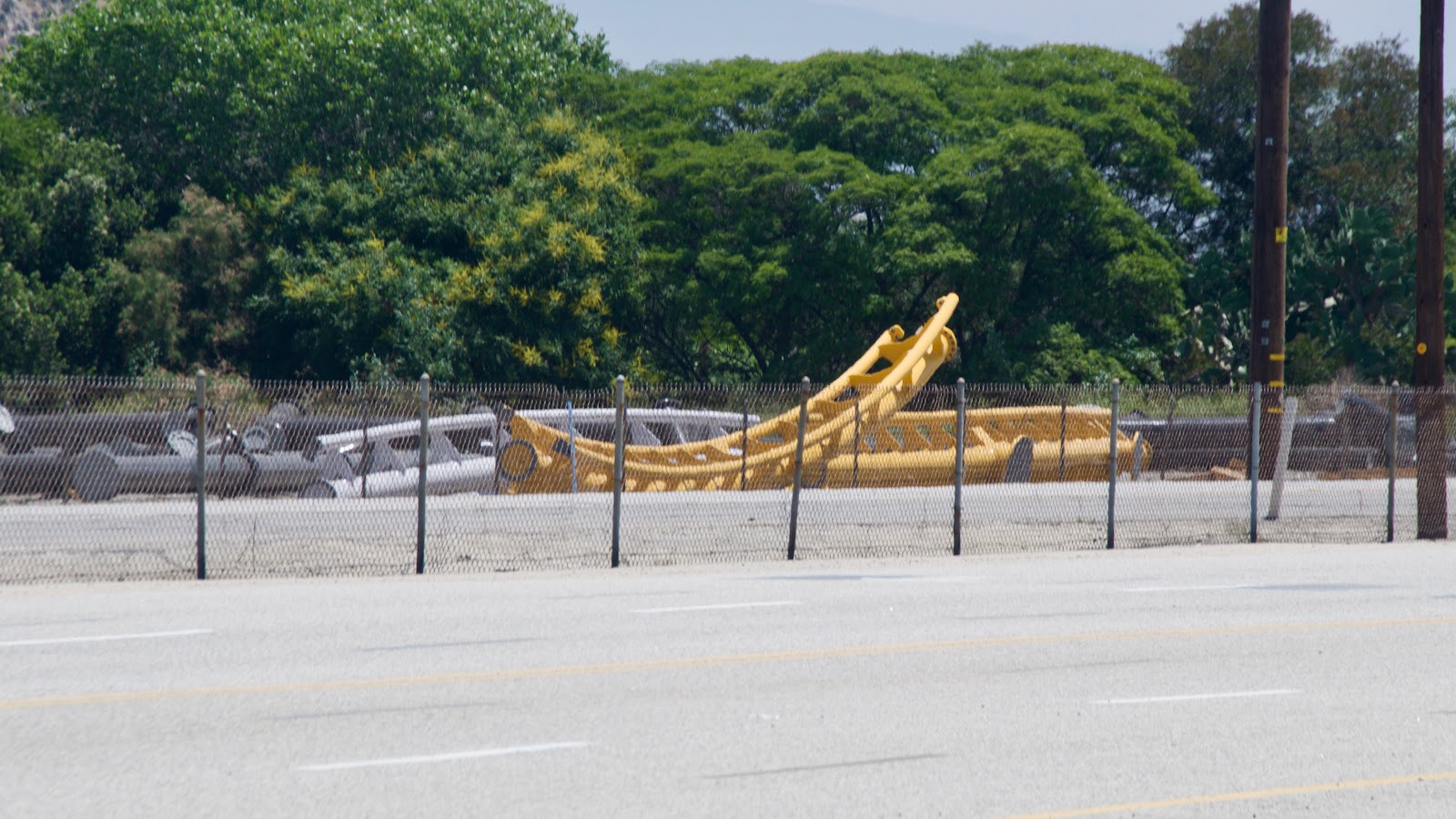 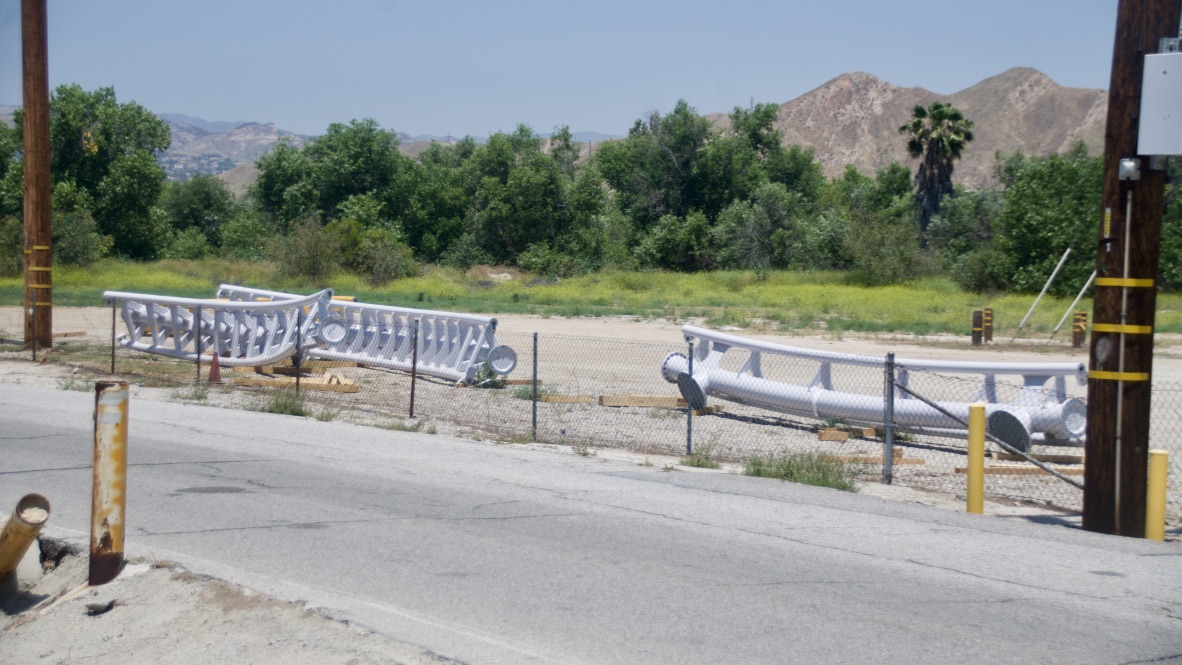 We were told that not all the track is on site yet; this means it will likely be quite a bit of time until
the project is finished and opened to the public. 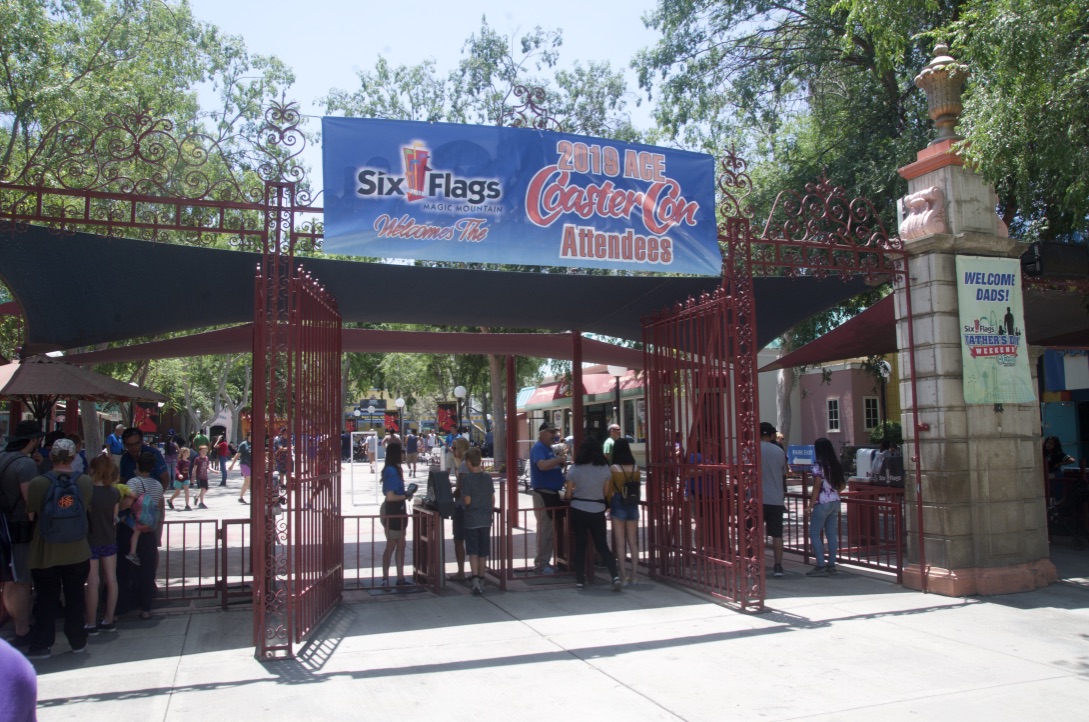 Now let’s enter the park and see how things look from the inside! 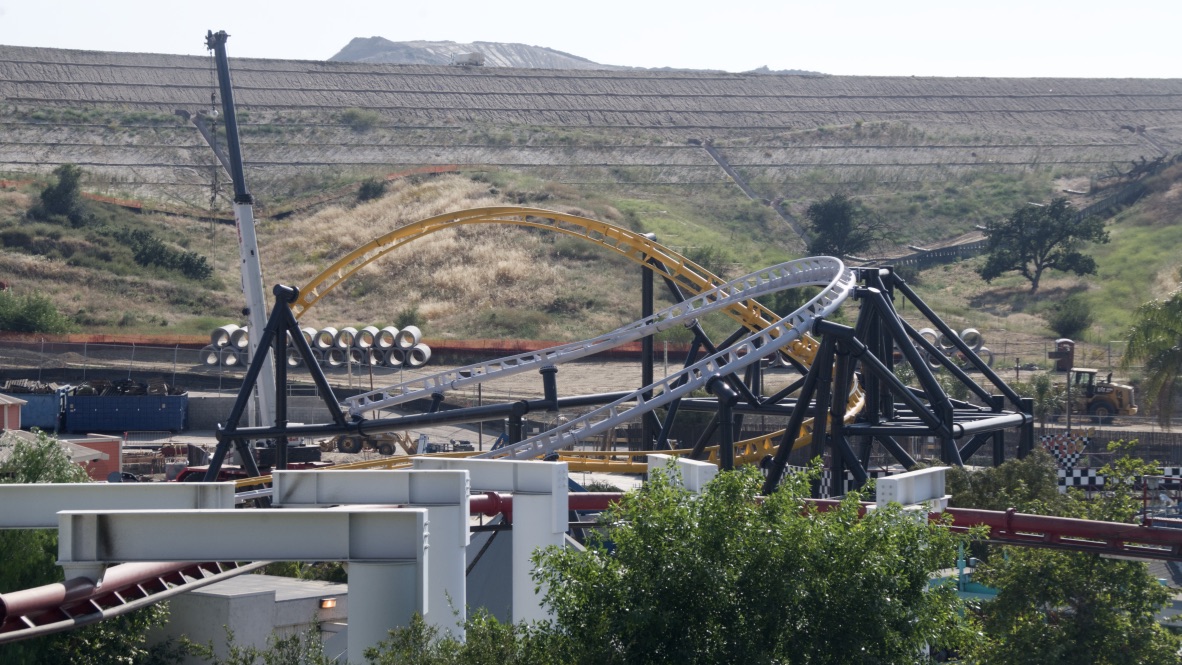 As one walks down the hill from Samurai Summit towards Gold Rusher, this tangle of yellow and
white track is very prominent. 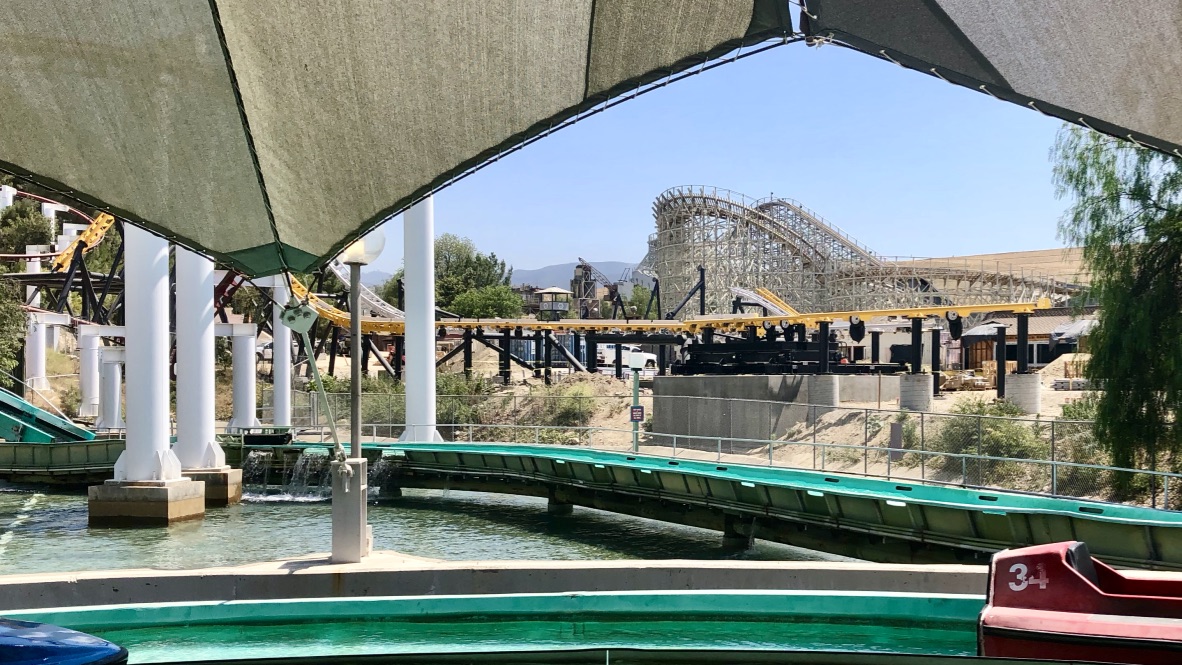 This is the view of the ride from the load area of Jet Stream. Notice the dual launch tracks… we’ll get
to them in a minute. 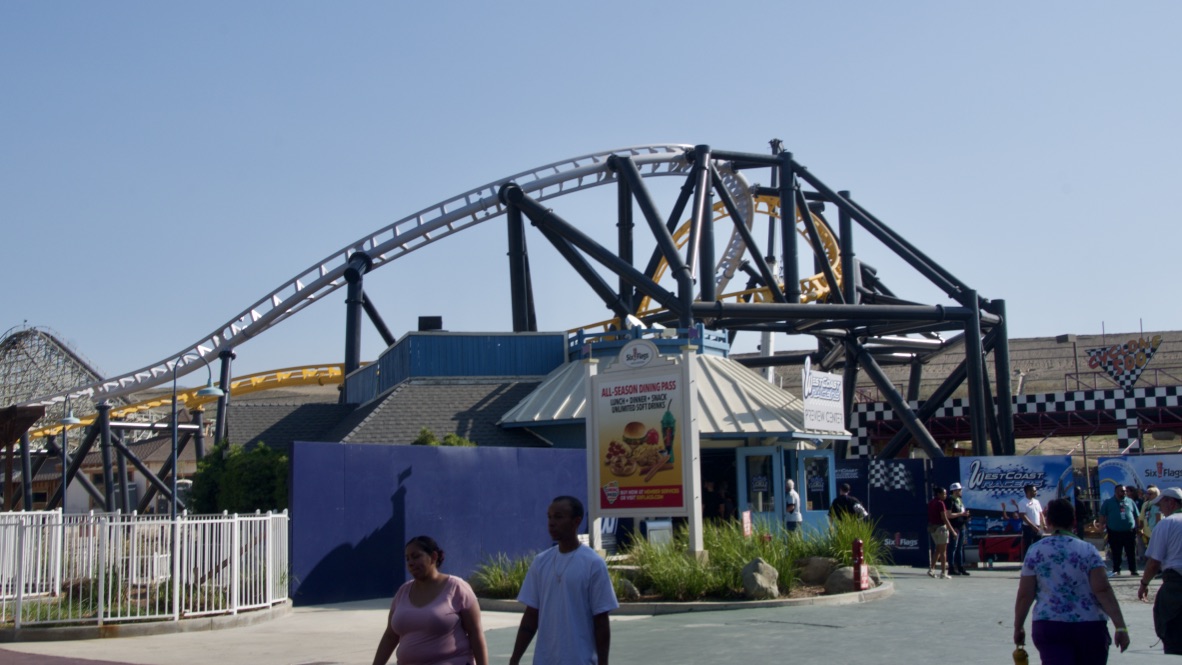 This is the majority of the ride construction that can be seen from publicly accessible park pathways.
West Coast Racers’ final turns tower over one of the last Cyclone Bay buildings still standing. 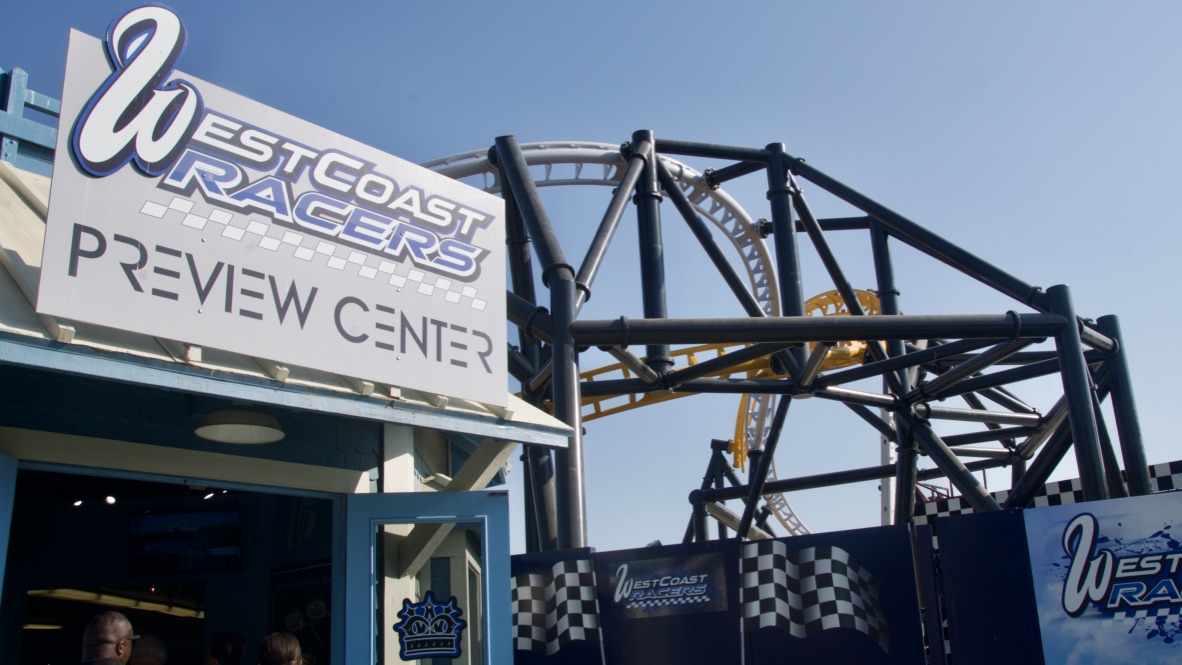 Let’s take a look inside the West Coast Racers Preview Center, shall we? 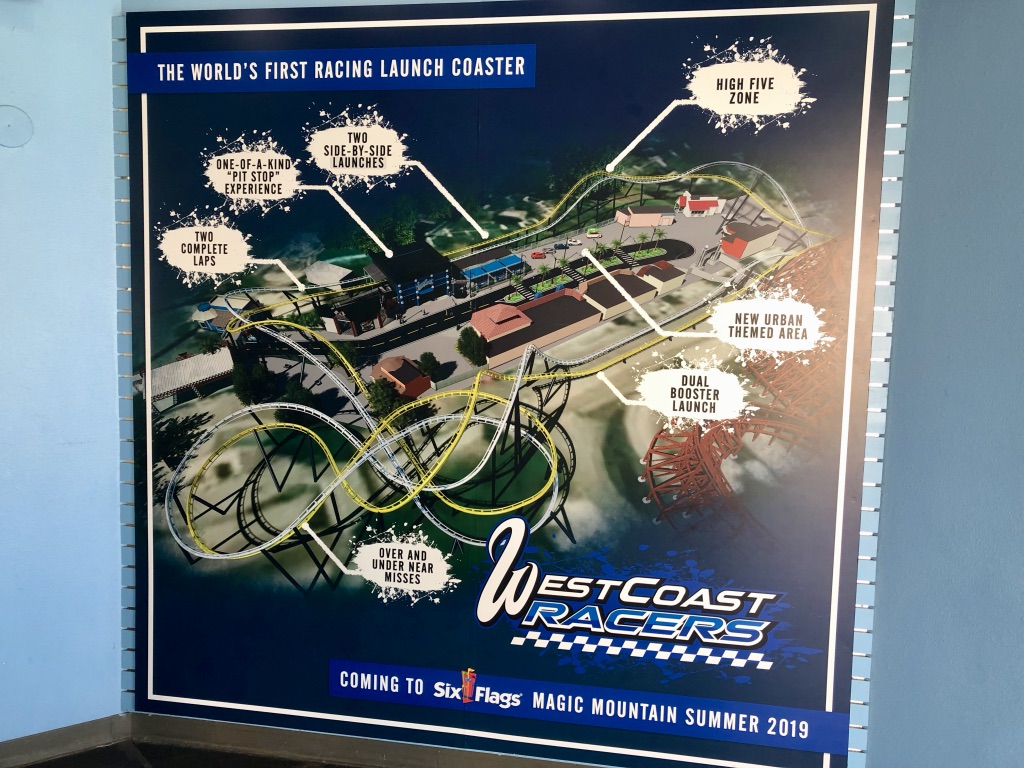 A rendering of the upcoming coaster and surrounding area is prominently displayed inside, along with
West Coast Racers merchandise and TV screens showing the ride animation. 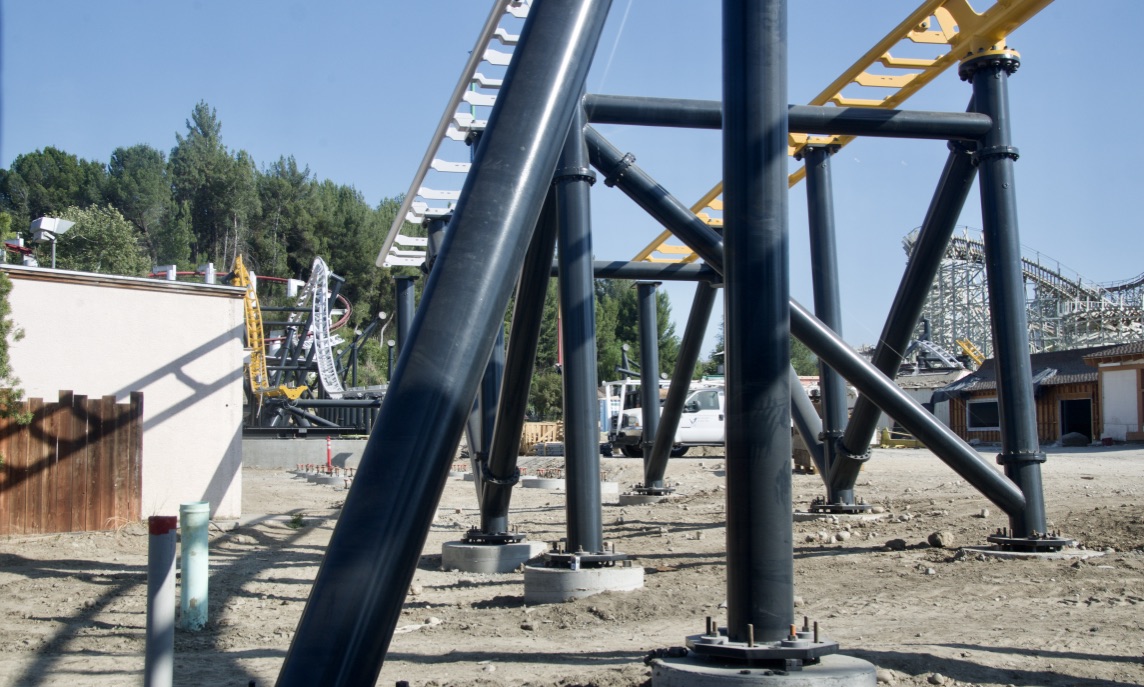 A limited view of the construction site is visible through a window in the back of the preview center.
Here, the ride’s two brake runs are visible, as well as two of the launches and high five element off in
the distance. 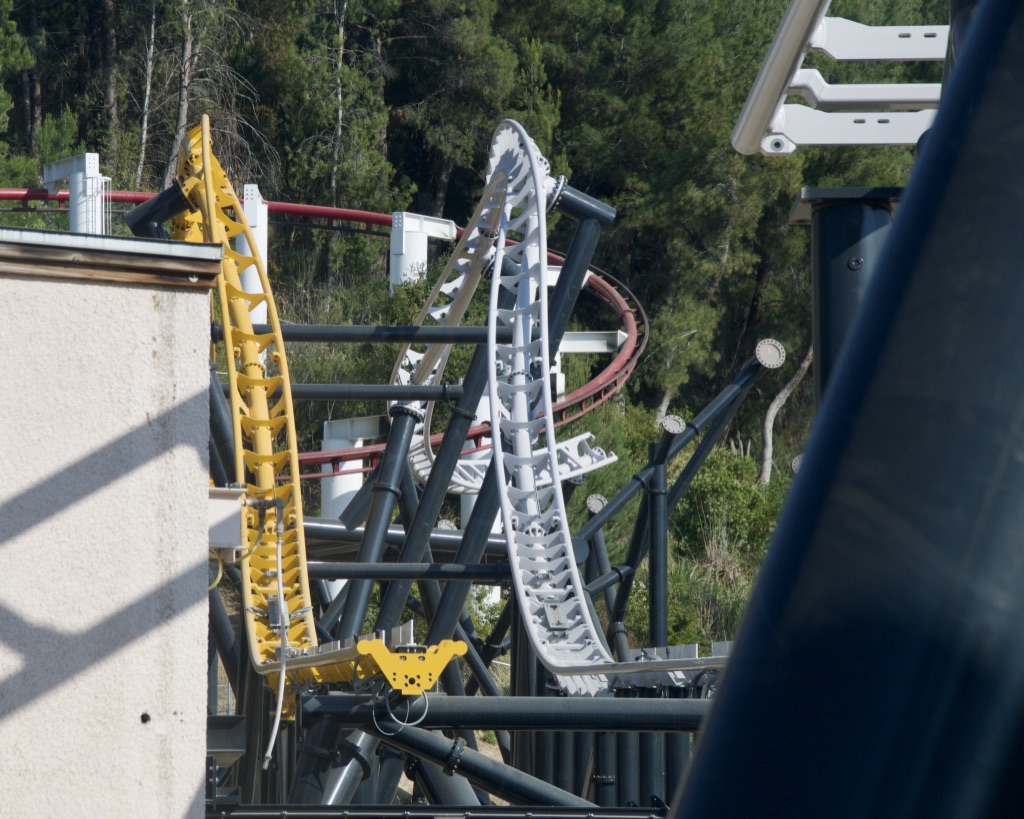 A zoomed-in view of the high five from this angle. 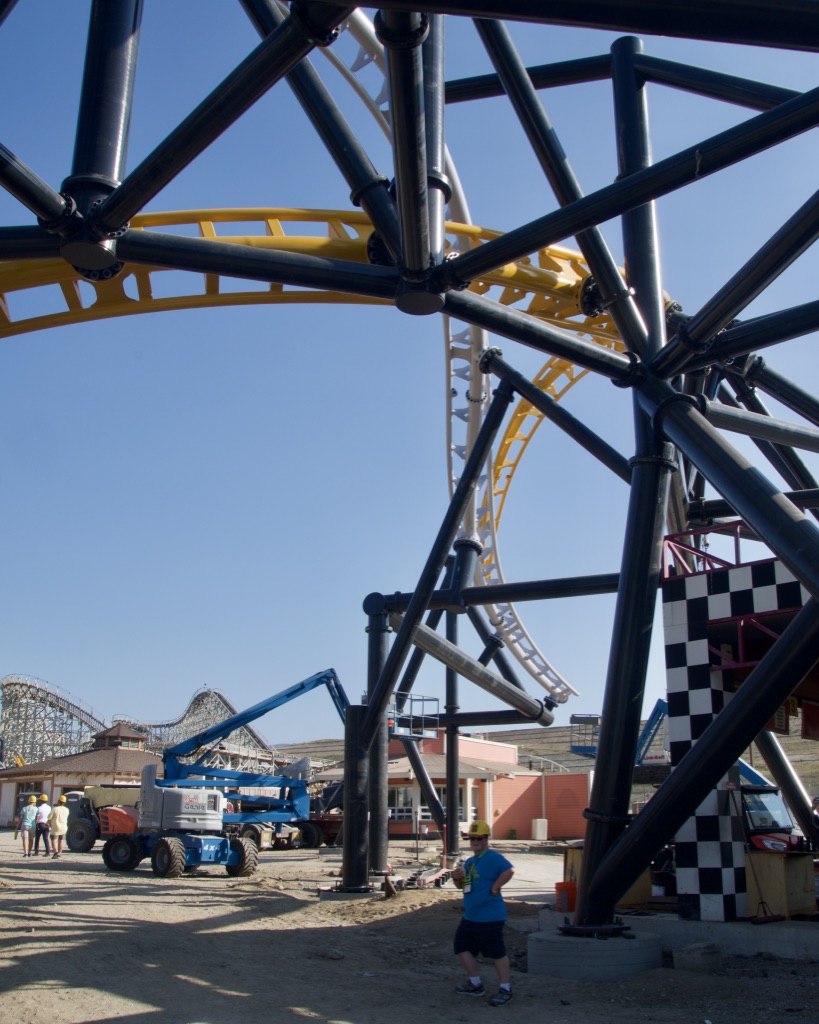 That marks the end of publicly visible construction, but now it’s time to go behind the scenes!
Grab a hard hat because this is an active construction site! 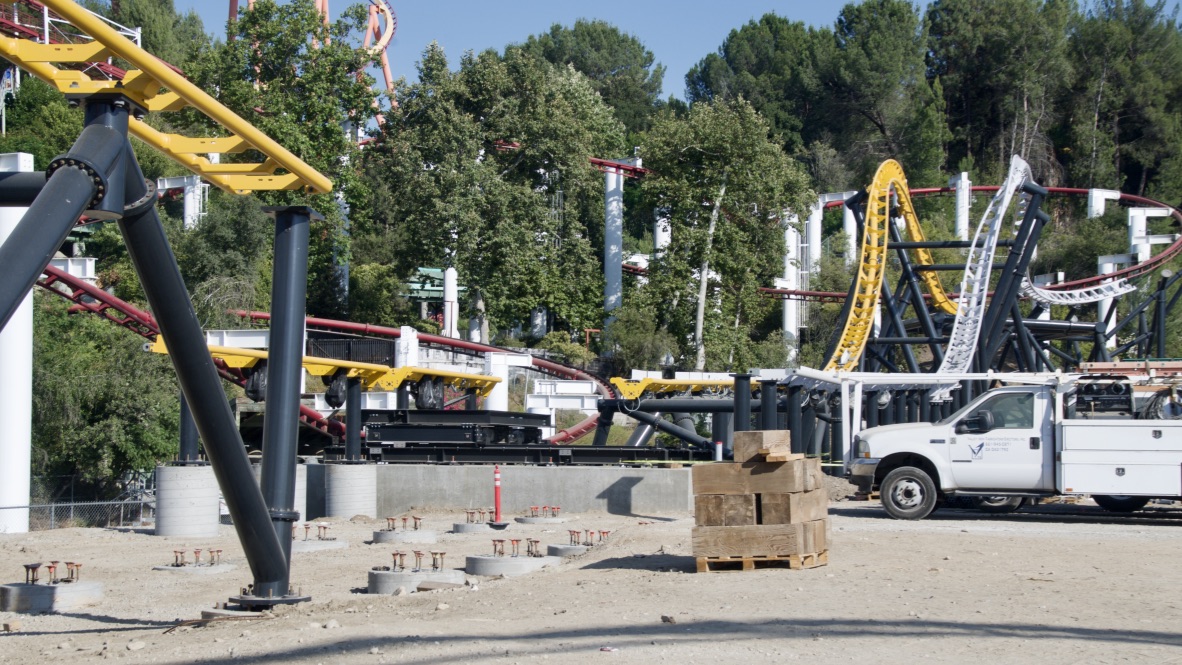 Here’s a better view of the future location of the ride station, as well as the first and third launches and
high five element I mentioned earlier. It also appears the transfer and storage track have already been
installed. 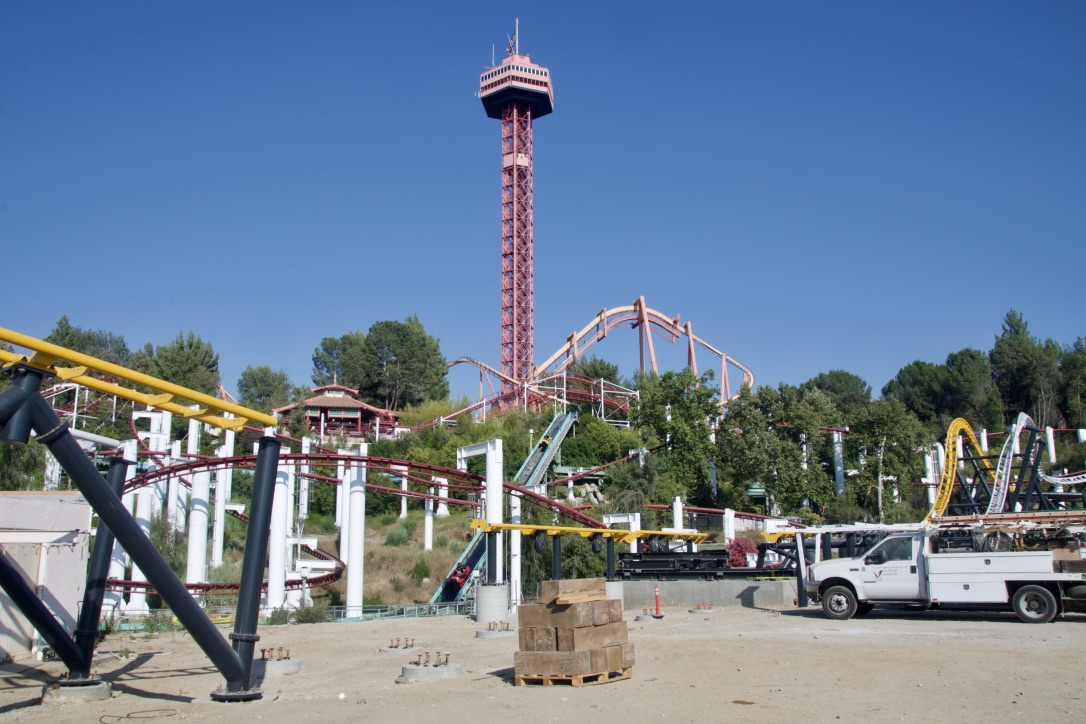 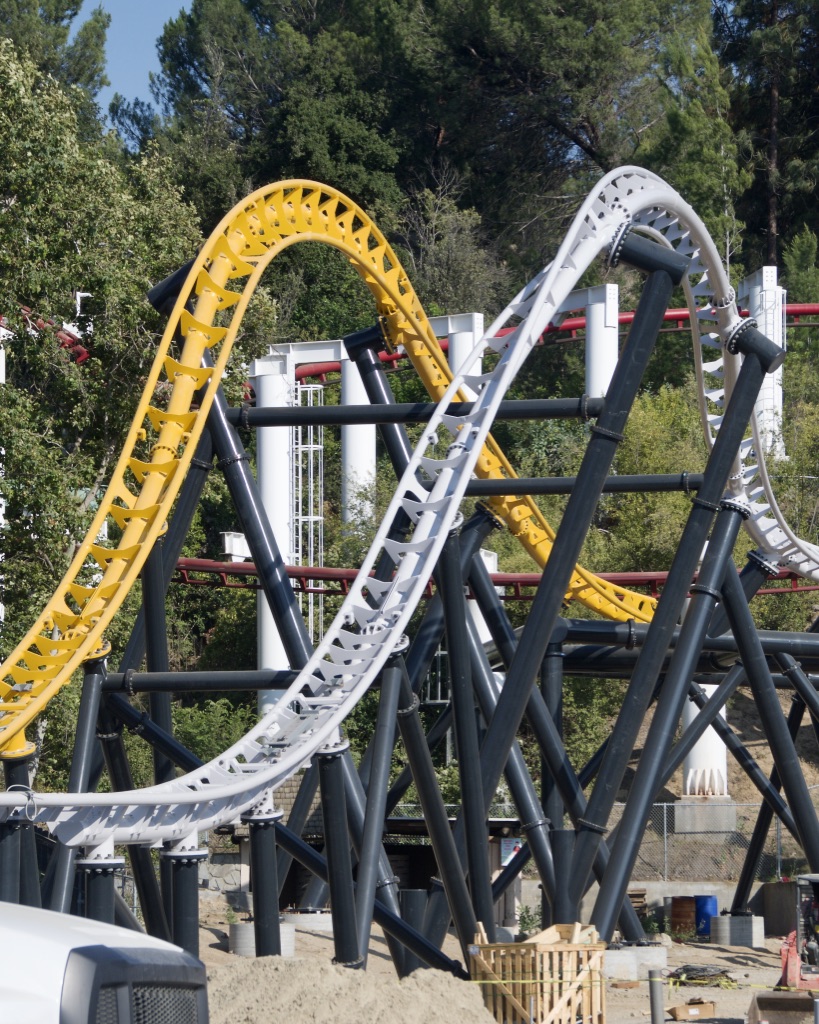 The high five element sure looks like a highlight of the ride. 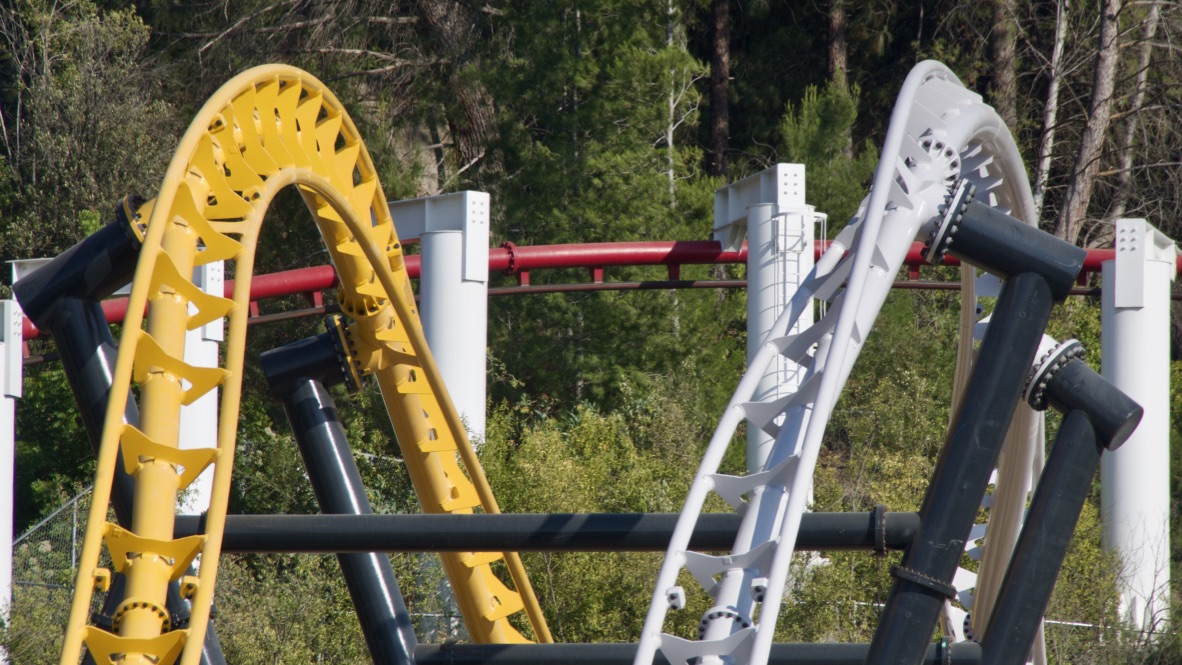 Look how close the two racing trains will get to each other! 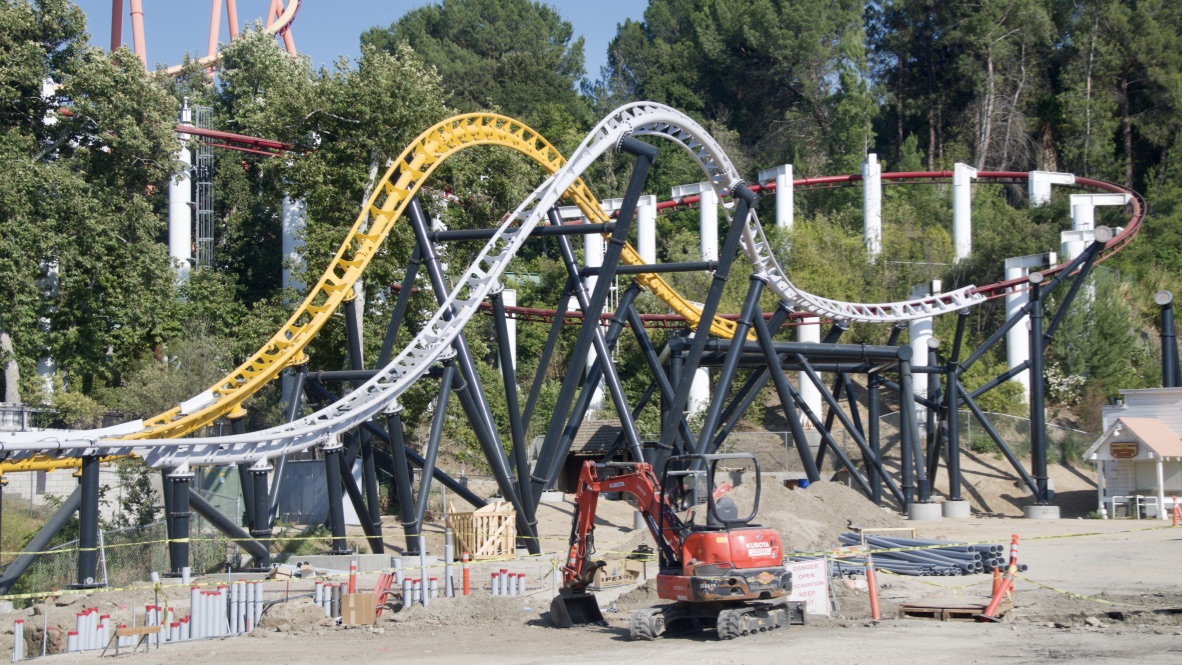 West Coast Racers also gets pretty close to Ninja at this point. In this shot you can also see where the
path to walk up the mountain toward Ninja and Tatsu will go - under that extra beefy looking support
structure right after the high five. 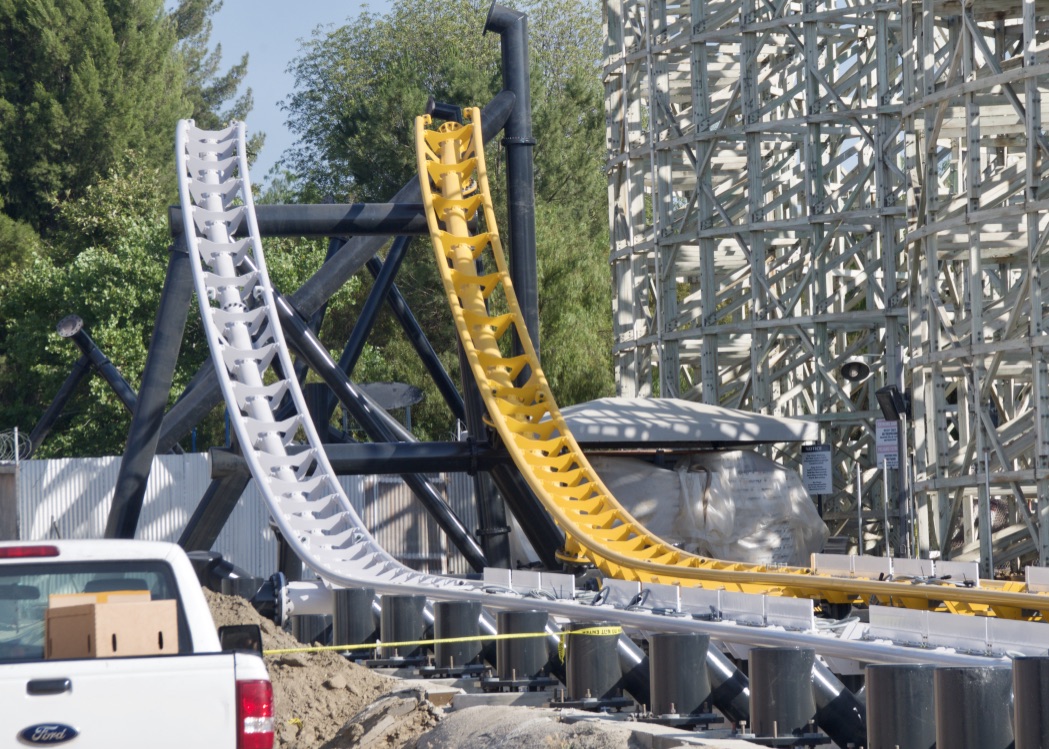 After a couple more twisting maneuvers crossing over the entrance to Apocalypse, the two sides will
hit another launch. 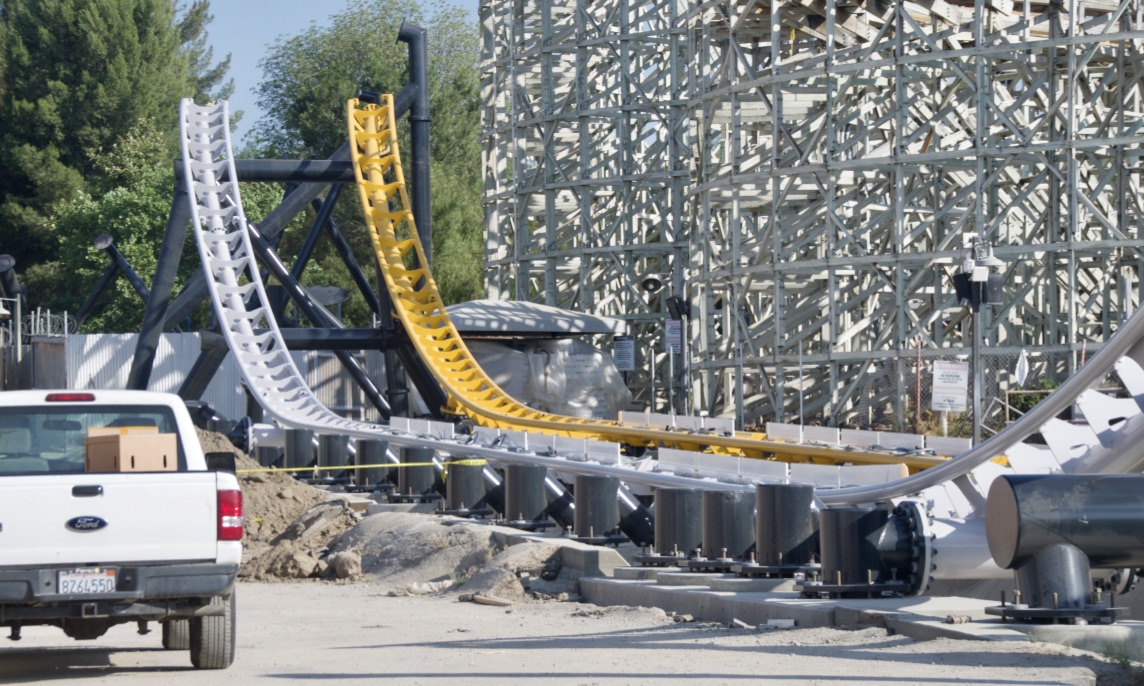 This second launch is built on top of the trench that runs along the full length of the backside of the
park. 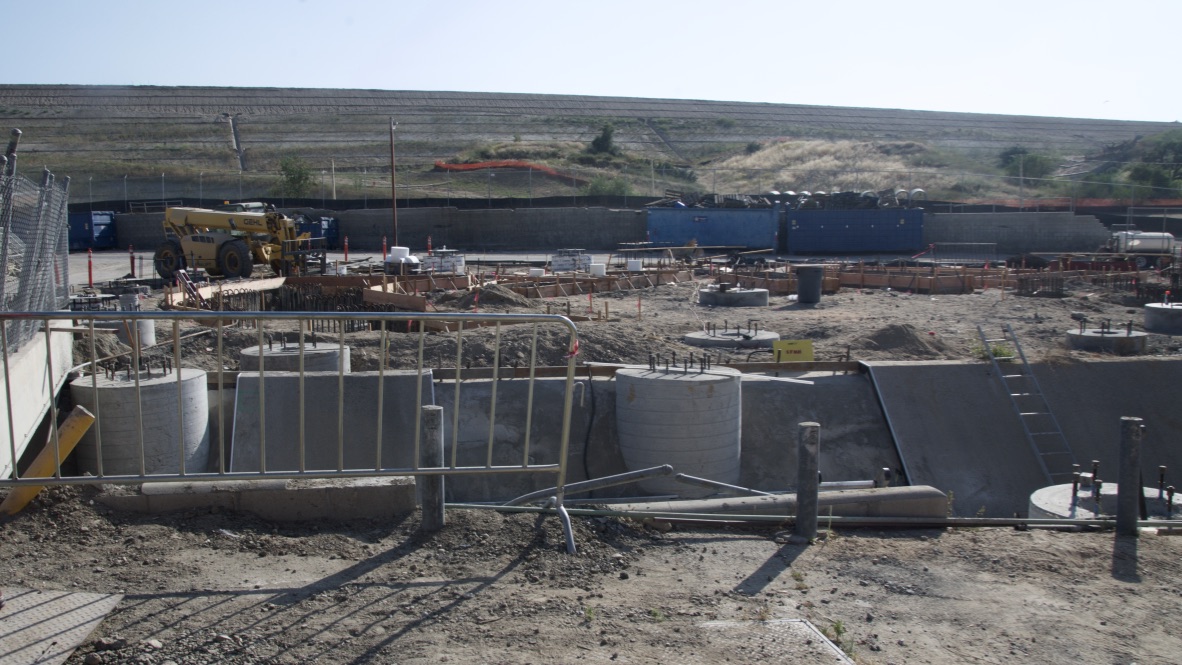 The coaster will then rise up and enter what we’ve heard referred to as the “spaghetti bowl” section
of the ride, where the two trains will race though multiple intertwining helices and crossovers.
Unfortunately, none of this section was under construction just yet, though there are many footers
in place for the supports. 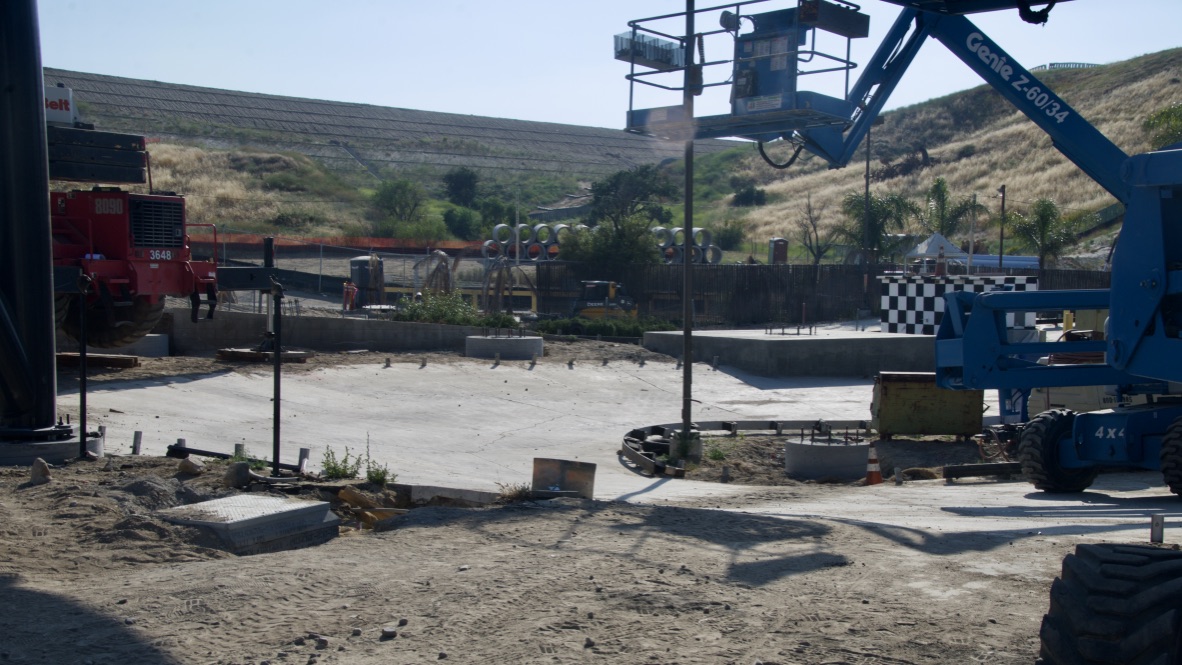 Oh, and most of this spaghetti bowl will take place on top of the preexisting go-kart track, which is not
being removed. Pretty cool! 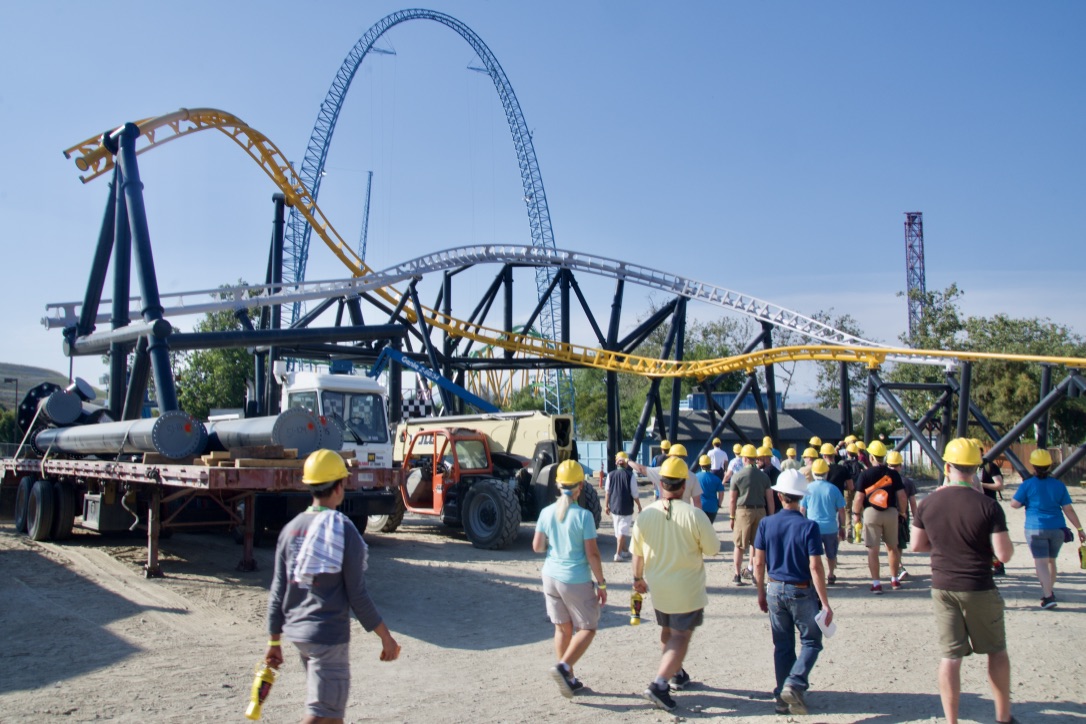 The very end of the two laps is the only other part that has been constructed. 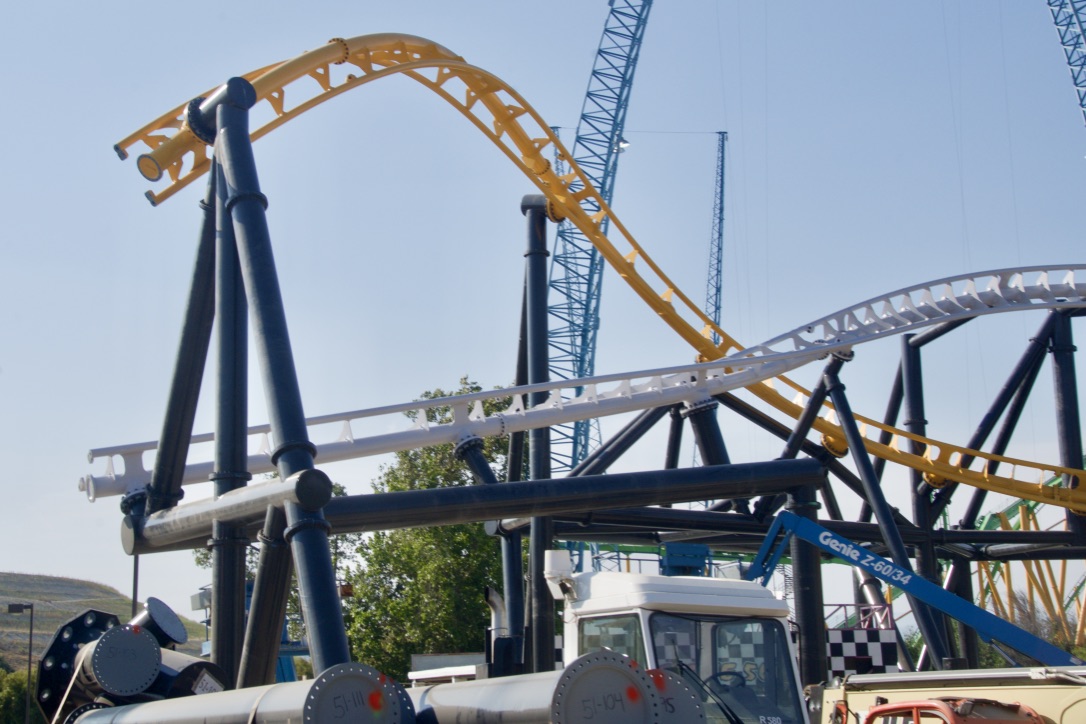 Here, one train will roll over the other, in a move very similar to one on Twisted Colossus across the
park. 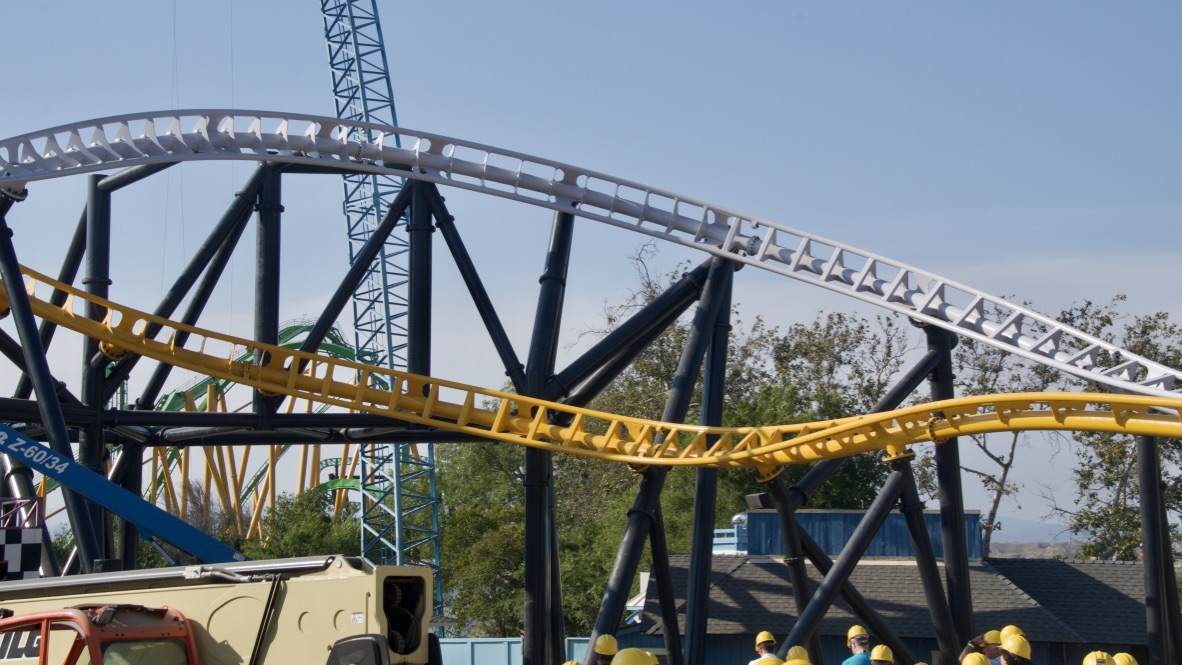 After one final crossover, the two sides will then bank directly over the pathway. 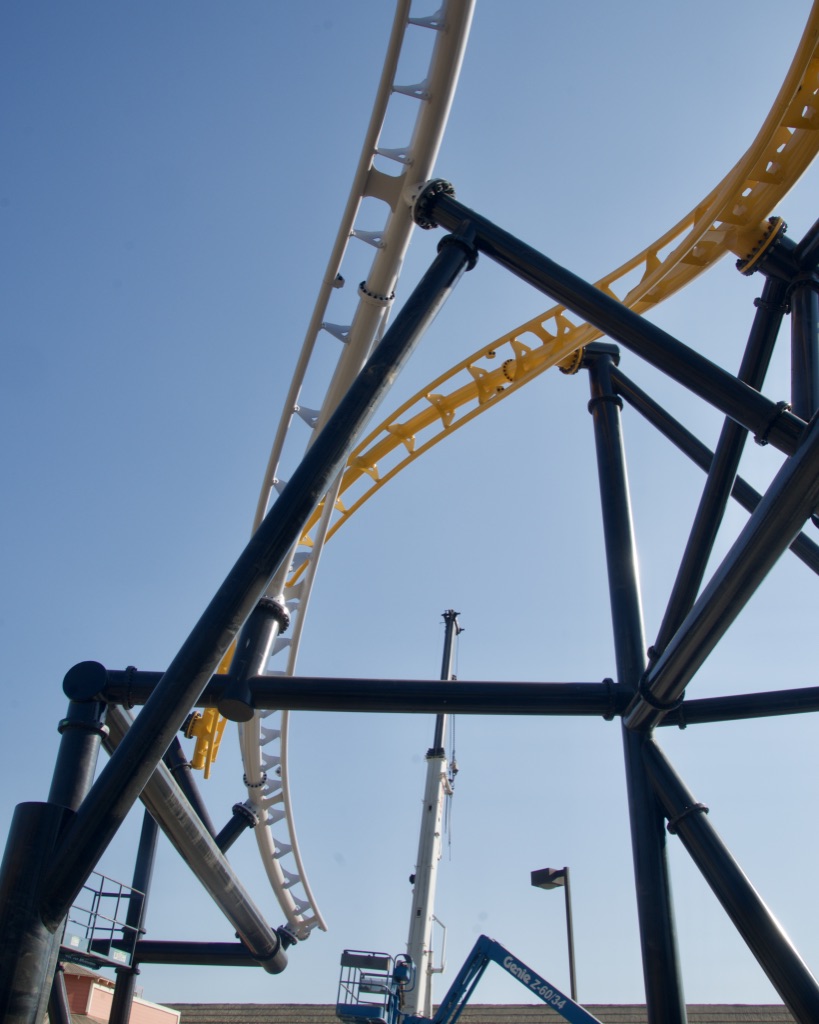 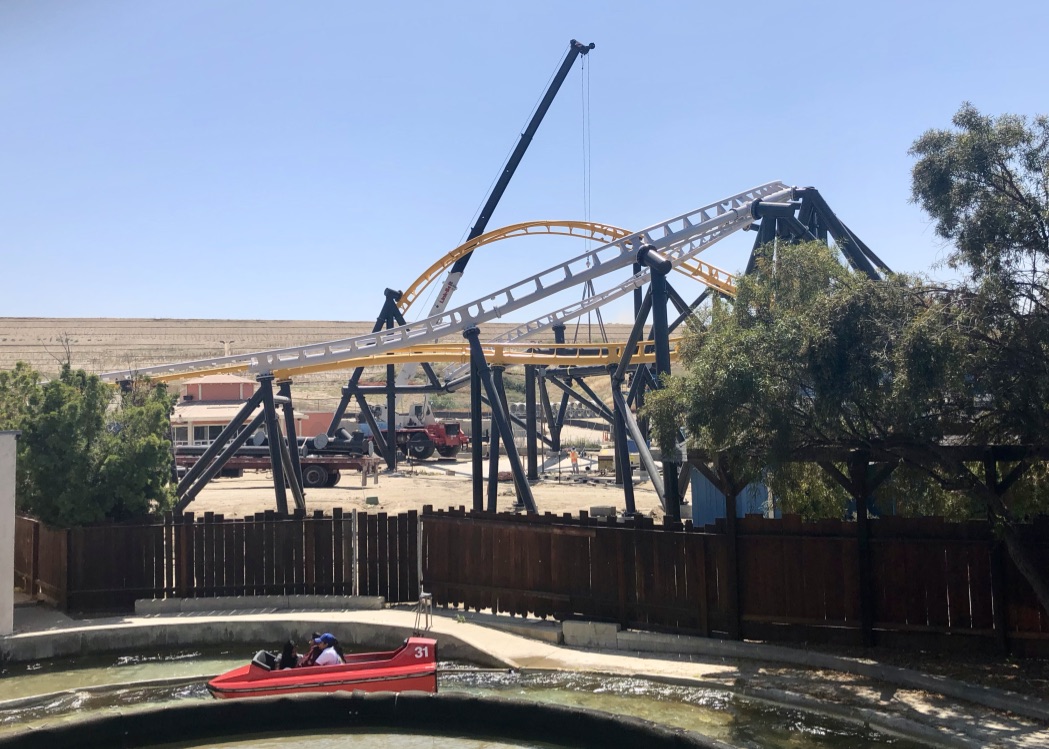 ..Because I noticed the day after the tour that a rather large support structure for the spaghetti bowl
had been installed in the last 24 hours! Despite getting off to a late start, the Magic Mountain
construction crews are now in full force, getting this ride ready to roll as soon as possible.


Special thanks once again to TPO Correspondent Harris Lanum for his trip report from the mountain. That's all for now from Theme Park Overload! Make sure to "LIKE" our Facebook page to get Breaking News Updates and Exclusive Content delivered straight to your newsfeed! Facebook.com/ThemeParkOverload My name's Nicholous, and Thanks for Reading!
Location: 26101 Magic Mountain Pkwy, Valencia, CA 91355, USA
Harris Lanum
Harris Lanum is an undergraduate student at UCLA, studying Civil Engineering. A SoCal native, Harris has grown up visiting theme parks and plans to pursue a career in the amusement industry.