June 09, 2017
Today we head to Disney's Hollywood Studios to see all of the action underway at the park! The park is currently in construction overload, as TWO new themed lands (Star Wars and Toy Story) are simultaneously under construction! This has significantly cut down on the number of park attractions at the moment, with the remaining attractions sustaining longer wait times than normal. The longer lines may be a little inconvenient now, but it will all be worth it soon! 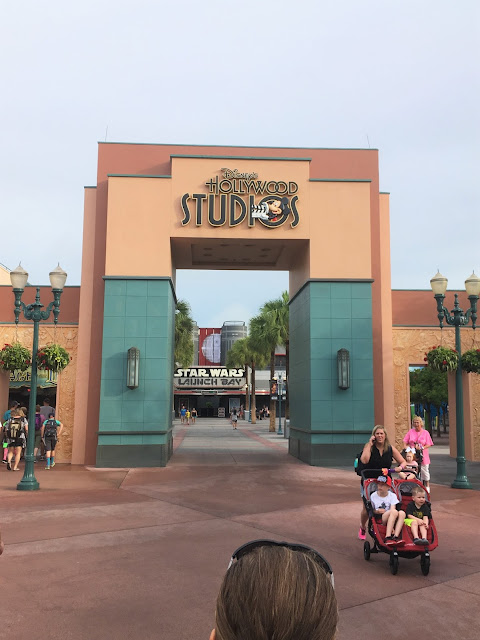 Welcome to the studios! 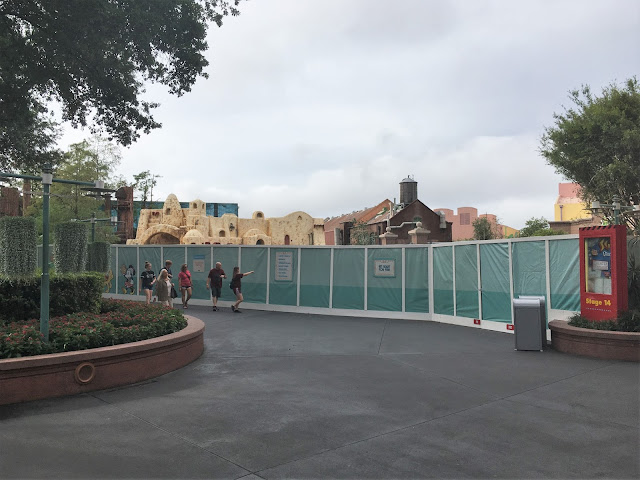 Jumping right in, let’s start with the heavily anticipated Star Wars land. This new section of the park will be neighboring the existing Star Tours attraction (The ride’s entrance is pictured above on the left by the large tree). 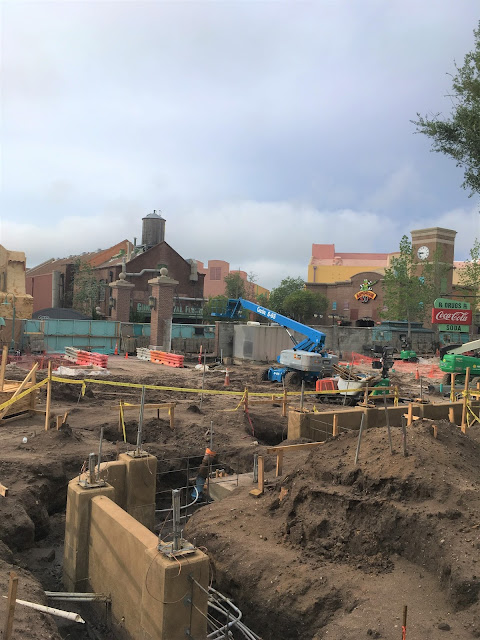 And here we go! Construction is well underway, with what appears to be a lot of rebar and foundation work currently taking place. 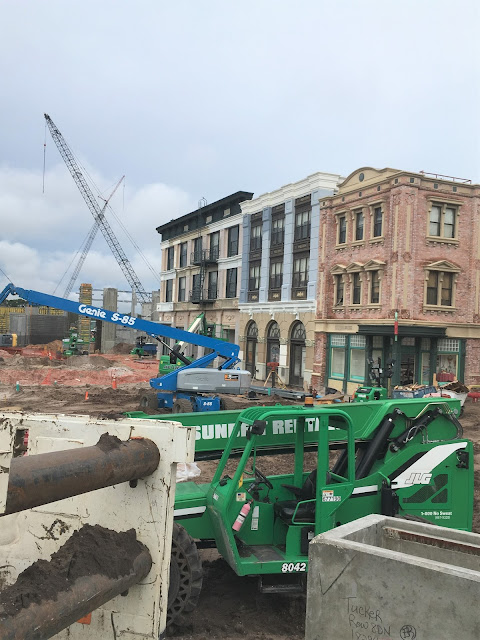 They slipped this new land into the old Streets of America section of the park quite tightly! The city-themed facades pictured above stand as one of the sole indicators of this area’s past. 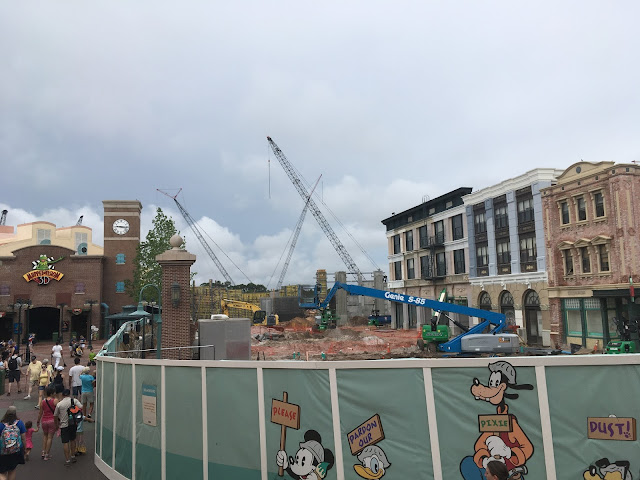 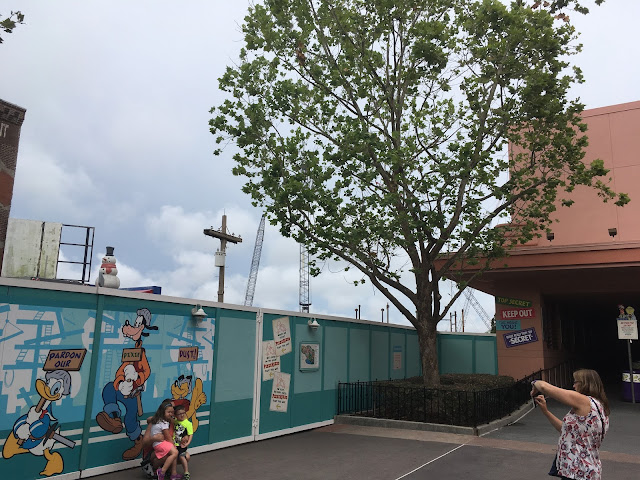 Moving through the Muppets section to the back, the construction continues! 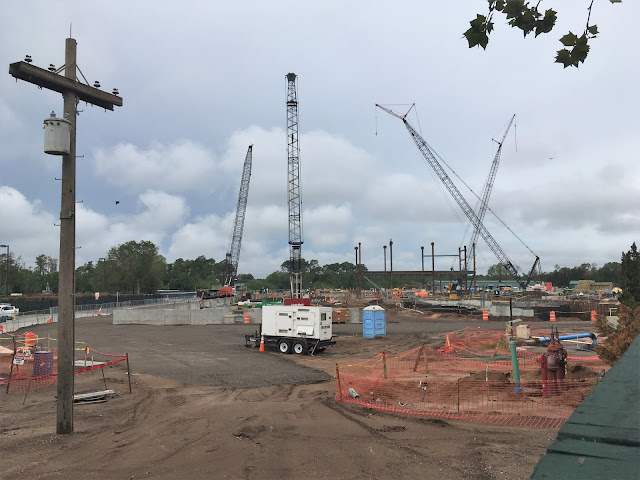 And we are vertical ladies and gentlemen! While specific details on the new land's attraction(s) have not been announced, this may be the beginning of the main attraction's show building! 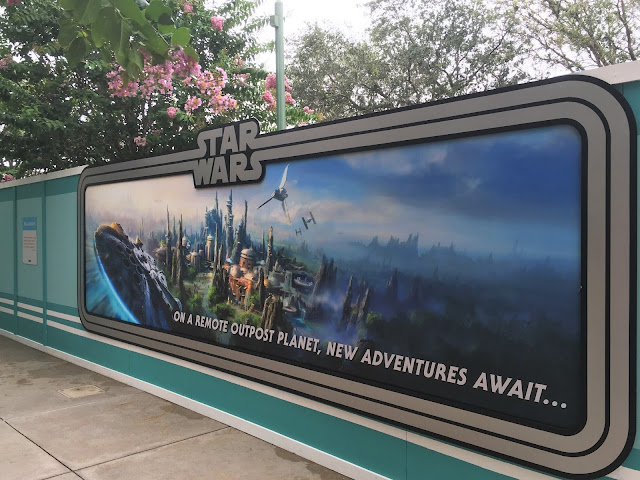 More details will likely be revealed from now until the estimated 2019 opening, and we can't wait to learn more! 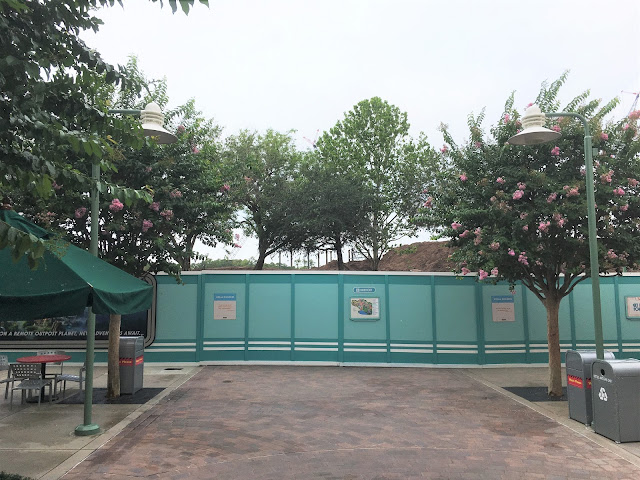 This will be another entrance point to the new land, this time from the Pixar Place section of the park. 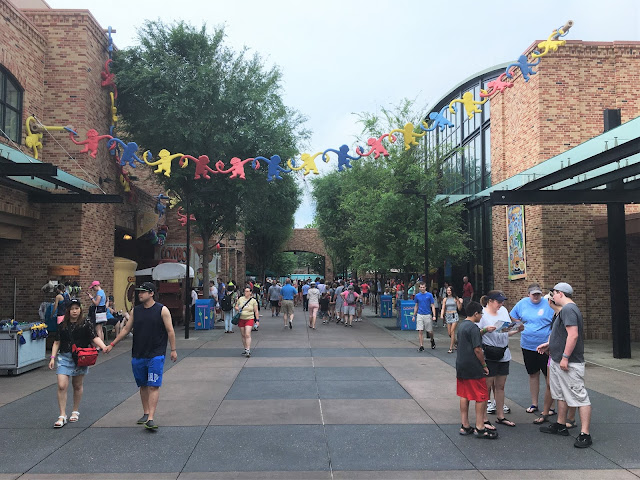 Taking a few steps back, with a quick clockwise turn, we find ourselves at... 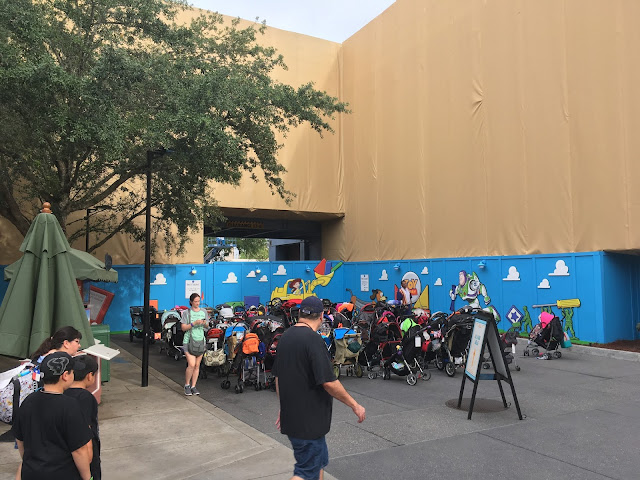 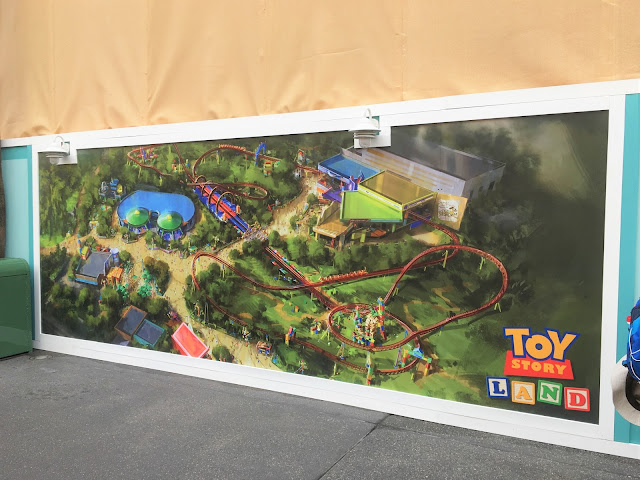 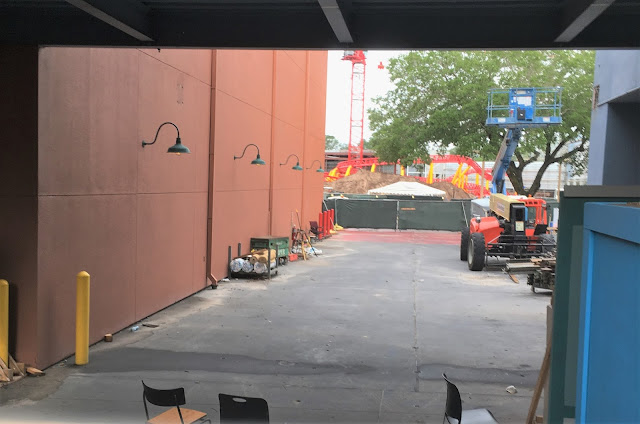 Peeking over the construction fences, coaster track for Slinky Dog Dash has already been substantially assembled! 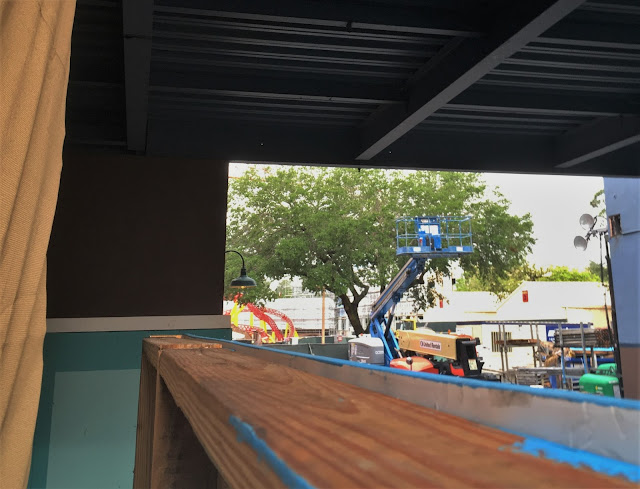 Along with this new coaster, an "Alien Swirling Saucers" flat ride will join the attraction line up for this new land. The existing Toy Story Mania attraction will also get a new entrance, opposite of its current entrance in Pixar Place, inside of the land. 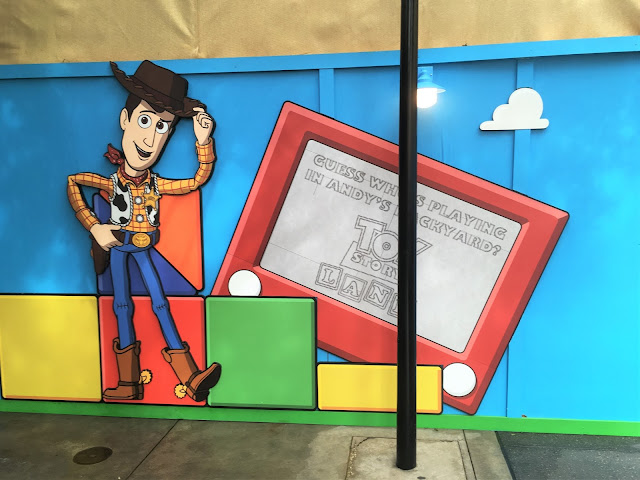 No opening date has been officially announced, but more info will most certainly be released in the near future! 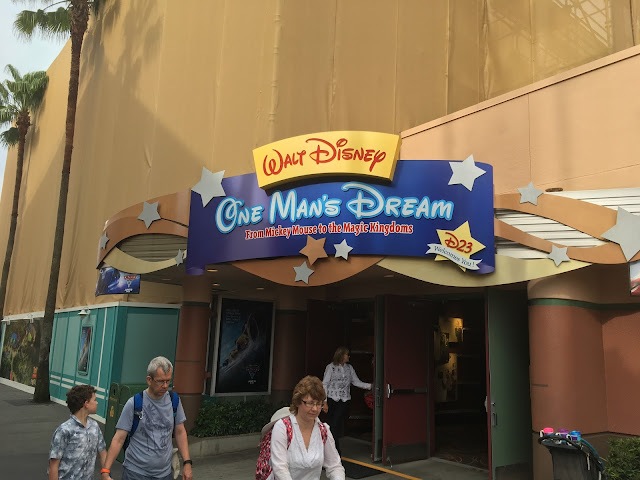 Moving on from the construction madness, the park's One Man's Dream attraction is also hosting a new limited-time exhibit and special preview for the upcoming Cars 3 film. 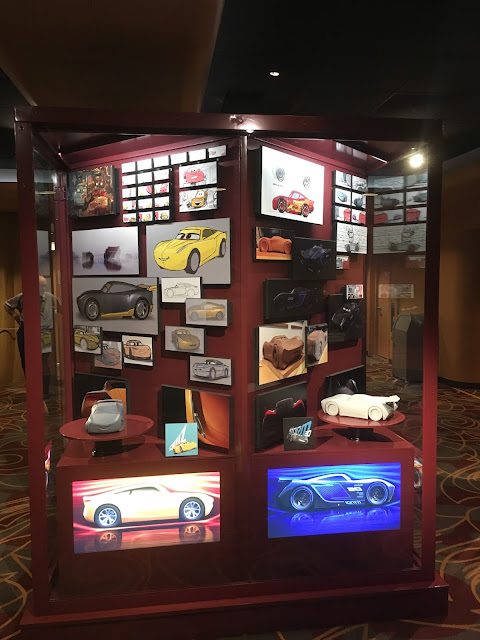 Inside, a new display showcasing concept art from the new movie awaits guests. 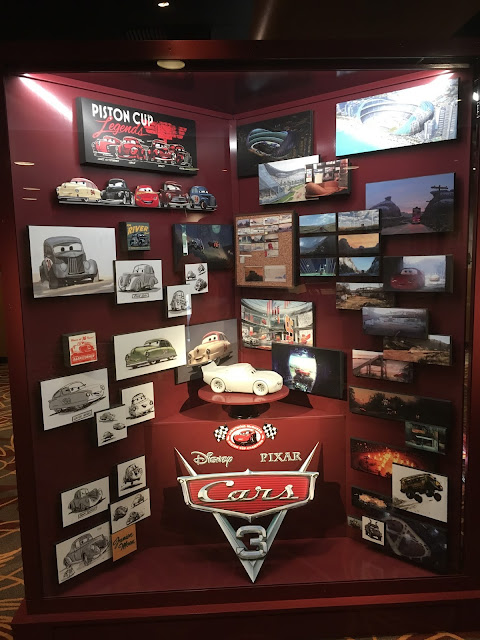 The drawings remind me of the Art of Animation hotel lobby! 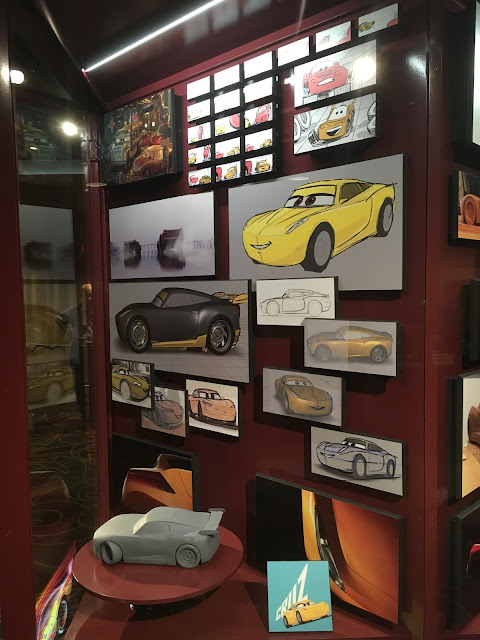 Looking from the other side... 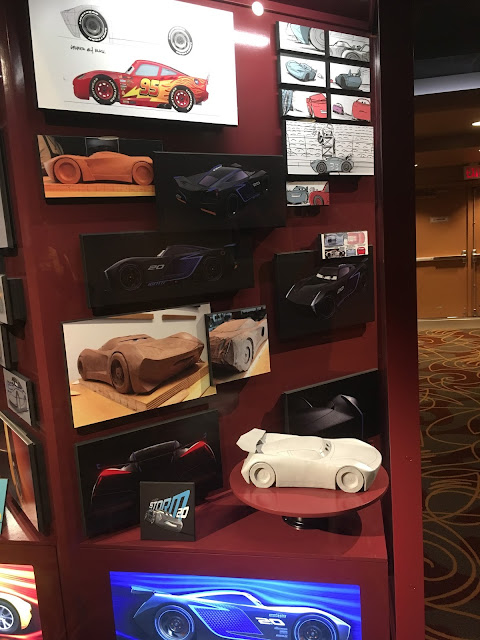 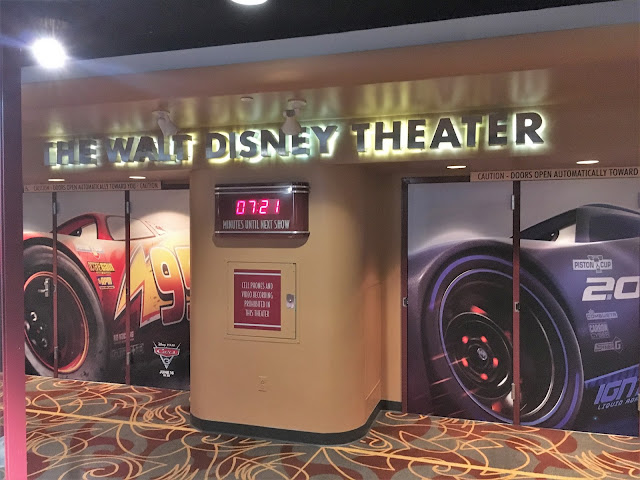 A special sneak preview of the film is also being shown in the Walt Disney Theater inside the exhibit. 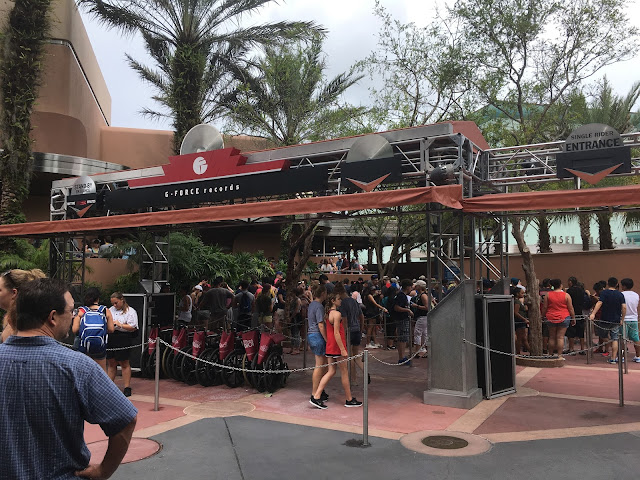 And finally, let's look at the most exciting topic of them all: transportation! 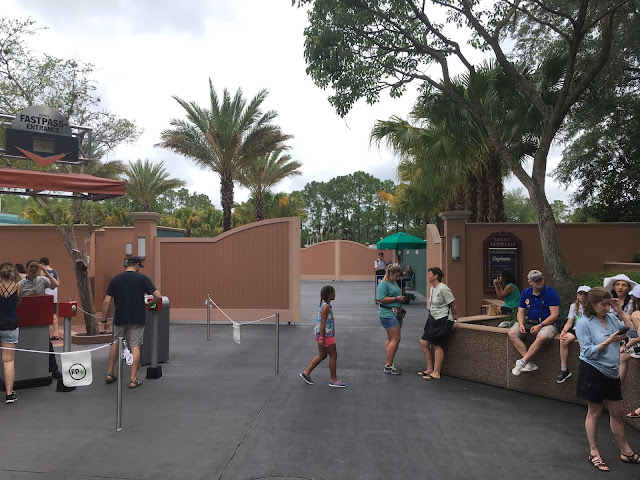 But really, this entrance next to Rock 'n' Roller Coaster at the park is for the new "Express Transportation" service recently introduced to all four Walt Disney World theme parks. It provides end-to-end park hopper transportation to a special entrance located inside of each park, allowing guests to bypass the general main entrance and security lines to park hop. The catch? A one day pass is $15.

This is a hard sell, in my opinion, when complimentary buses provide the same service just a short walk away at the main entrances of each park. Additionally, for me, walking through each park's entrance is part of the experience! Park hopping to the Magic Kingdom and NOT walking down Main Street U.S.A. would seem a bit strange, But, we'll just have to see if and how this new service continues down the road, and if guests find the cost justified.

That's a wrap from Disney's Hollywood Studios! This park has big things coming in its future, and we can't wait to see the property transform over the next couple of years. Make sure to "LIKE" our Facebook page to gain access to Exclusive Content and Prize Giveaways (We have a Walt Disney World Park Map giveaway, exclusively for our Facebook fans, coming up very soon!) Facebook.com/ThemeParkOverload My name's Nicholous, and Thanks for Reading!
Location: 351 S Studio Dr, Lake Buena Vista, FL 32830, USA