June 03, 2015
Today we head down to Six Flags Magic Mountain to get a Full Review of the newly opened Twisted Colossus Hybrid Coaster! This 4,990' long and 57 MPH coaster takes the record as World's Longest Hybrid Coaster from the New Texas Giant in Dallas, and brings Rocky Mountain Coaster's proprietary I-Box steel track to the West Coast! Twisted Colossus emerged from its original wooden form over an incredibly speedy 9 month construction period, and returned with a slightly larger drop and overall track length. Does this critically acclaimed new coaster live up to the hype? Let's find out! 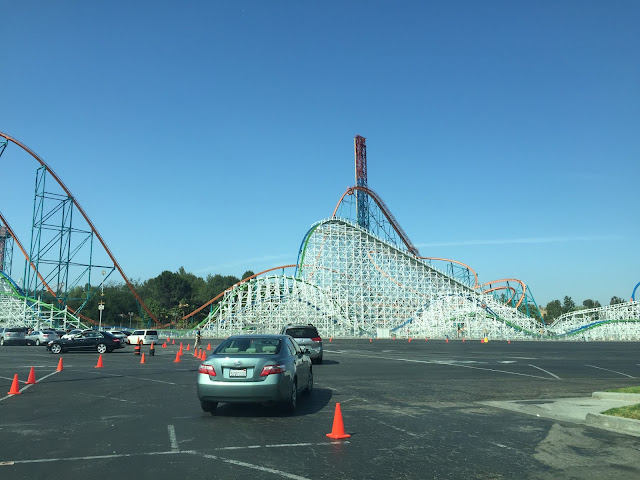 The coaster sits in an optimal location for all guests to marvel and ogle at while arriving! The White, Blue, and Green color scheme work well on this coaster, and is a unique pallet to the park.

Located along the right-most border of the park, guests are first introduced here to the new "Screampunk" district, opening along with Twisted Colossus as a rethemed area to the park. 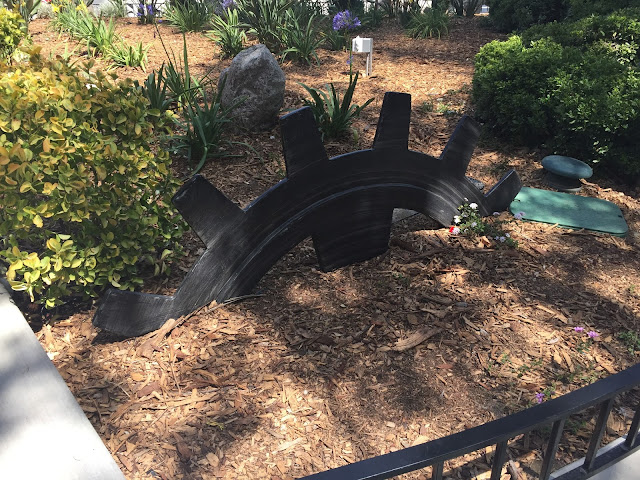 "What the past would look like if the future happened sooner"... The less you think about the motto, the cooler it is. 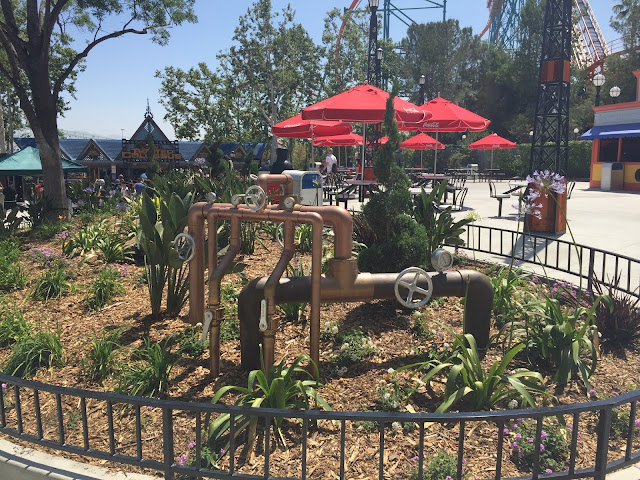 The theming is decently "fresh" and interesting enough to make it entertaining. As I always say, "For a Six Flags Park" the atmosphere is well executed and a noteworthy addition. The one song the park has on loop for the new area may get a little annoying after a while though if you plan on riding Twisted Colossus multiple times! 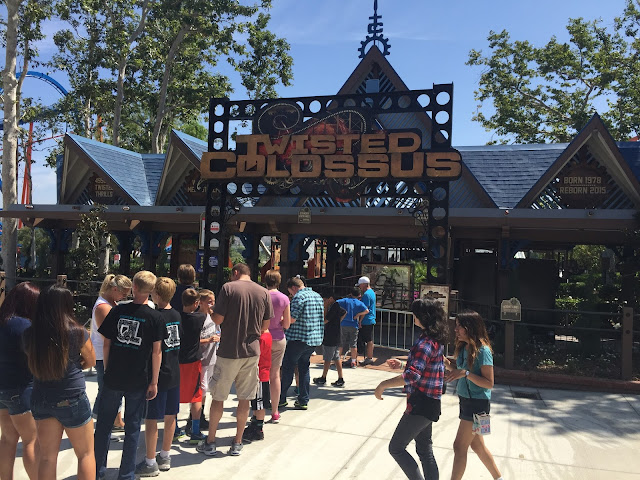 This is just after park opening on a Monday...Pretty good! (The queue went back behind us for a while) 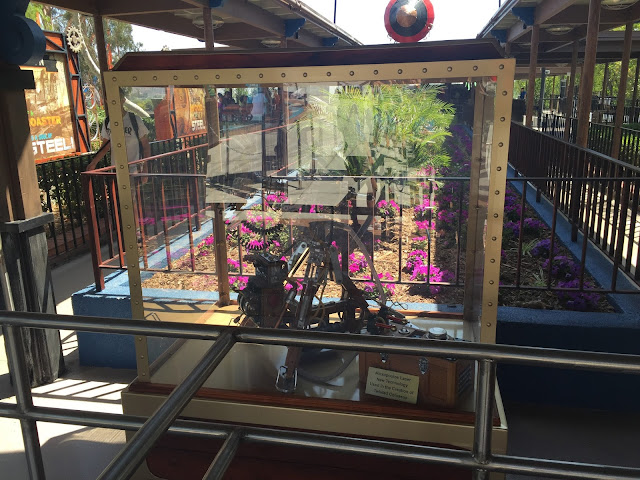 I don't really know but "Screampunk" is...but I guess this is some of it! 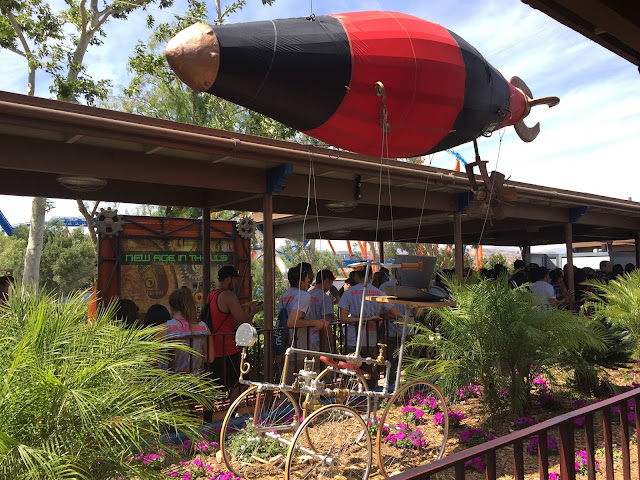 Key word from the review above: Unique 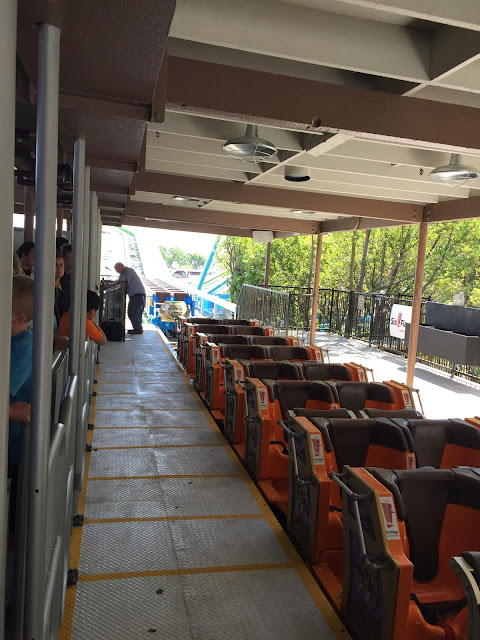 Look at that RMC goodness! Personally, this my third RMC Hybrid Coaster (I've ridden Iron Rattler and New Texas Giant) and that'll be what I'm comparing it against. 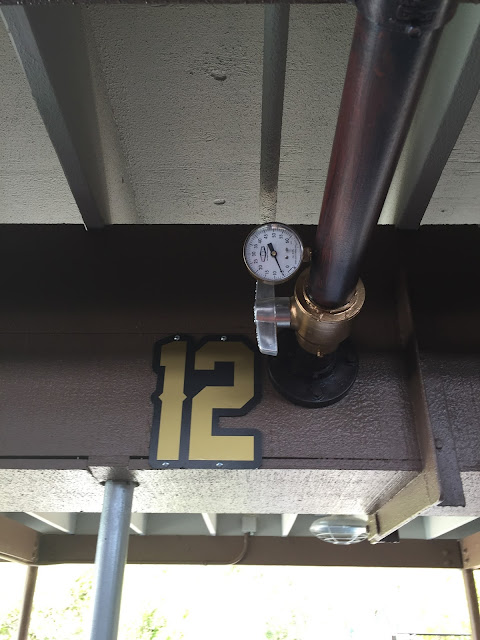 "Excuse me, I think my queue line is over heating!" 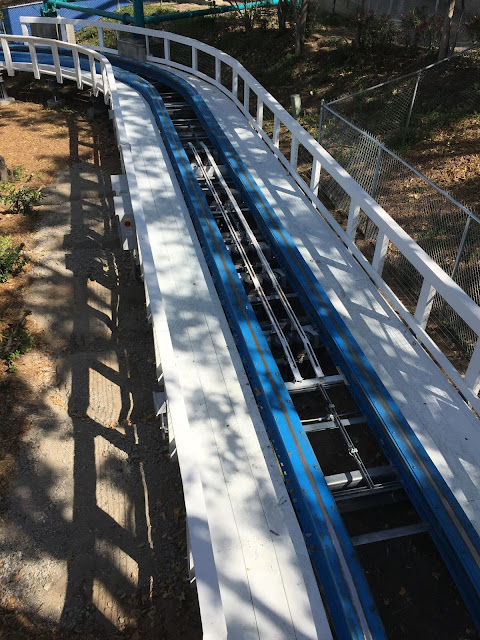 I found it cool that the park used Drive Wheels for the first twisty segment on the ride, as no other Hybrid Coaster has. (Their's ANOTHER record for you to advertise Magic Mountain!)

Okay, let's get down to business. Of my 5 rides throughout the front and back of the train, this is definitely a Front Row type coaster. The front has more airtime than expected, and a nice open environment that allows you to fully appreciate the elements and feel the speed the coaster travels at. It features many low to the ground elements, which makes the 57 MPH top speed feel much faster.

The Racing element is the main draw for this ride. The exhilaration of racing and looping up and under another coaster is very unique, and adds a lot more to the overall ride than you may think. Without racing another train, the coaster feels empty and as if something's missing. The guys over at RMC must know this, as I believe the ride is programmed to slow or speed up a train on the lift hill in order to wait for another train. On one instance while riding, our train slowed to a crawl on the lift while another train sped to catch up to ours on the opposite side. They are willing to slow a train and possibly sacrifice capacity at the expense of racing the trains, and that alone should prove its importance to the ride. 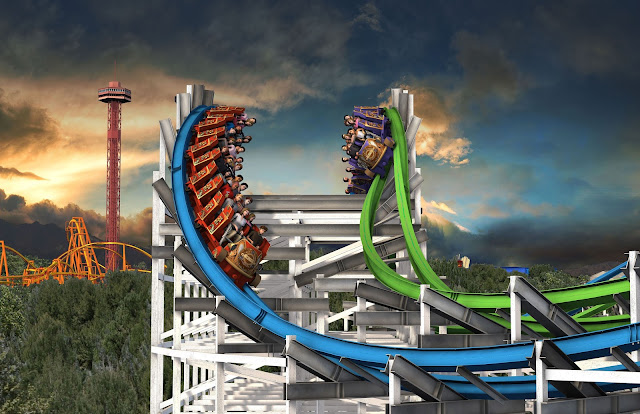 I came to this ride with moderate expectations, and the Iron Rattler and New Texas Giant (2 of the only 3 other Hybrid RMC coasters in existence) as a comparison for this ride, and I believe this hurt my thoughts towards it slightly. The insane airtime RMC is known for is still present here, but in a quicker and less exhilarating form vs. its counterparts in Texas. Instead of the Long, Sustained Ejector Air like IR and NTAG, the coaster features many powerful, but quick, "pops" of ejector air. The train also crests them in a somewhat rough fashion, creating more of a rough yank than forceful ejector time. It almost seems like they got the curvature of the airtime hills slightly off, and this is why Twisted Colossus isn't AS liquid smooth as other RMC Hybrid Coasters. To be clear (And to prevent fanboys from coming to my house), it still has great airtime and is smooth in total!

Alright, enough of the nitpicking and little critiques. Overall, TC brings a unique experience to the already diverse line up at Six Flags Magic Mountain. When you have 18 other coasters in the same park, bringing something new to the table itself should be applauded. My favorite moment is during the High Five moment on the green track the second lap around, as the train has to complete a nice twist in the opposite direction which provides a nice sensation. It's definitely an enjoyable ride, and satisfies the need as being another "Signature" coaster MM will be known for. Don't miss it! 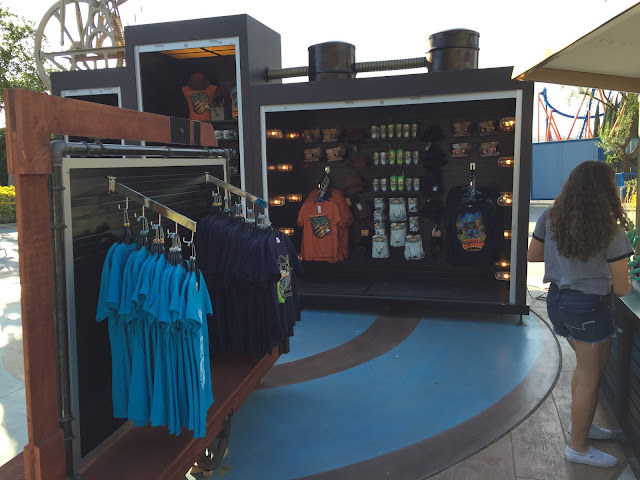 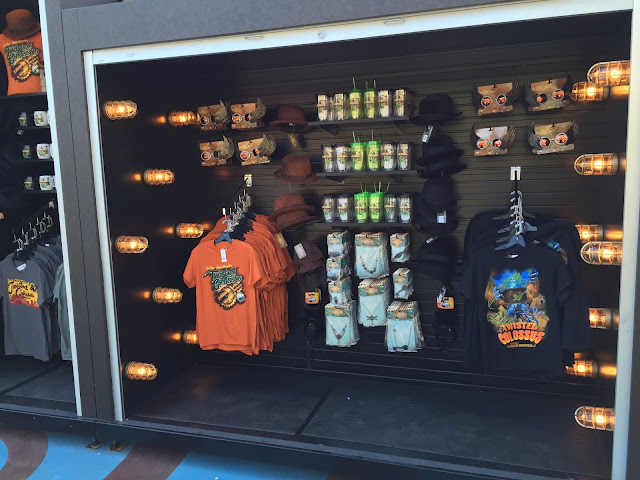 For you material people. 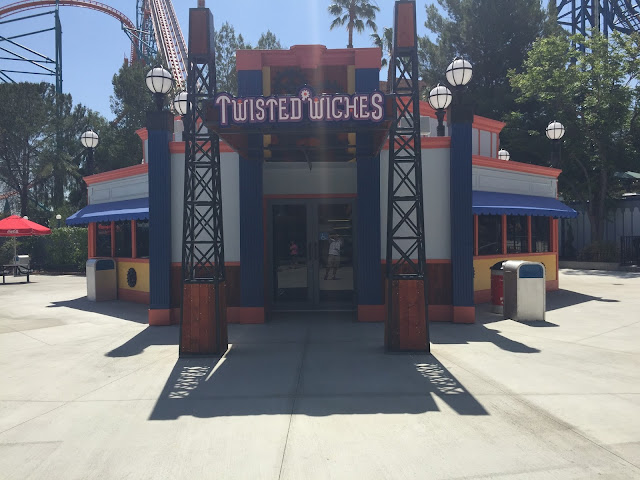 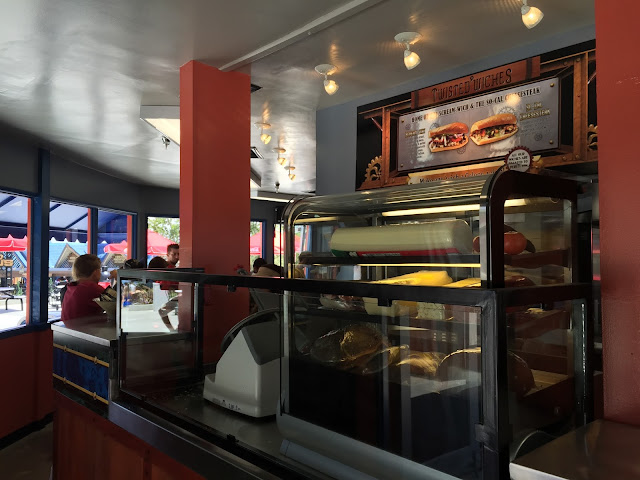 I applaud the park for opening up a themed food location with unique offerings! 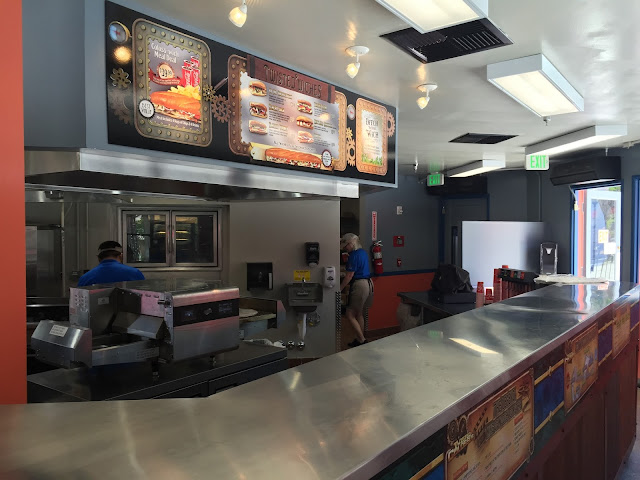 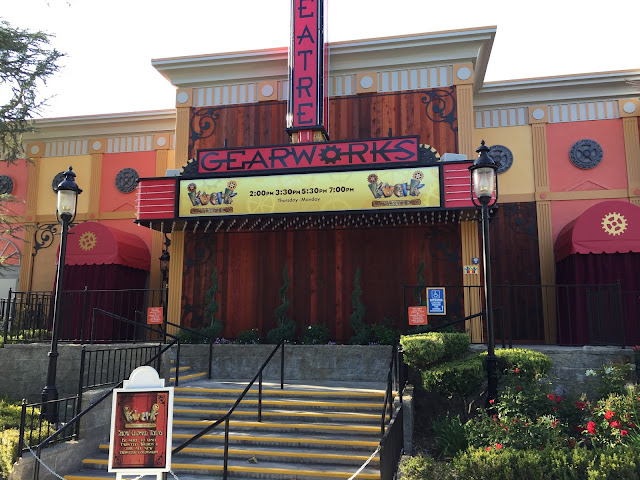 Hooray, the Gearworks theater has a unique show for Screampunk! 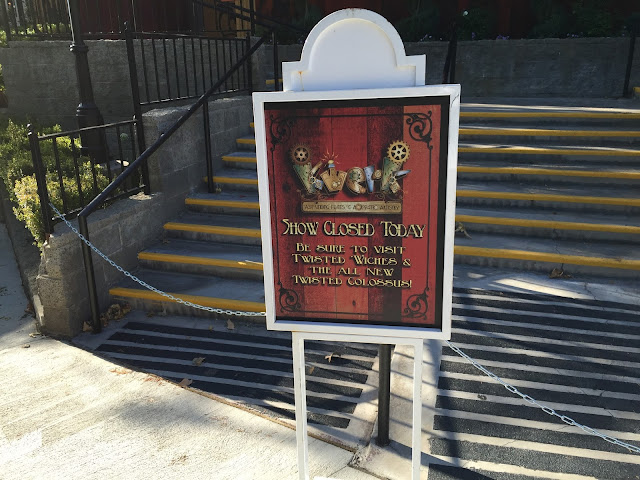 Mannnn! The show was suppose to be open today, and the park was decently packed. Nobody I talked to could give me a reason for the show being closed. Oh well! 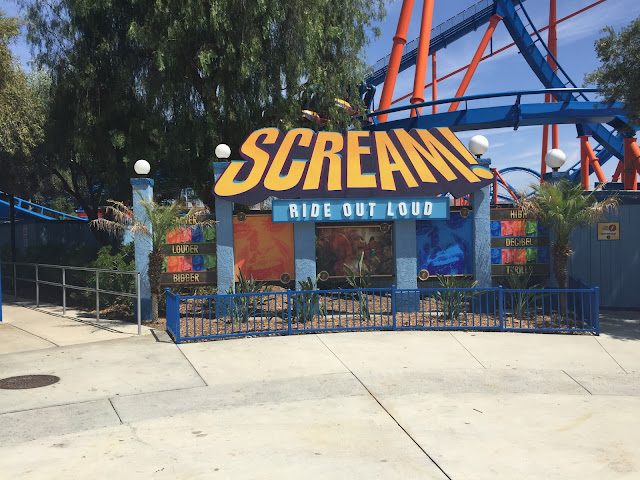 Did I mention Scream got a nice refresh and paint job to match the area?! Happy to see the park investing in maintenance and up keep of their rides! 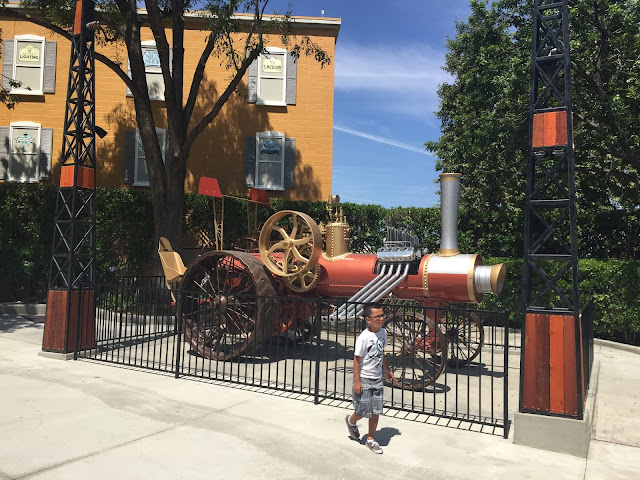 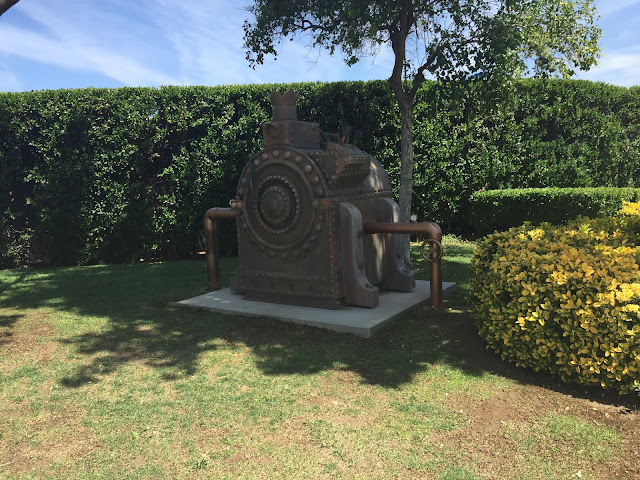 "Screampunk"... I still don't fully understand it, but I like it!

That sums up are look at Twisted Colossus! I think Magic Mountain hit another home run with this one, and overall has been doing a fantastic job over the last few years to add and refresh the park as a whole! That's all for now from Theme Park Overload. Make sure to "Like" our Facebook page to receive Exclusive Park Content that doesn't make the site delivered straight to your inbox! www.Facebook.com/ThemeParkOverload My name's Nicholous, and Thanks for Reading!
Location: Six Flags Magic Mountain, 26101 Magic Mountain Parkway, Valencia, CA 91355