Knott's Berry Farm has announced their New 2015 attraction today, in the form of a very unique 4D Interactive Dark Ride! Built with a collaboration of Triotech and their Multi-Sensory amusement park technology, this new attraction will feature Interactivity Overload with 11 Curved Video Screens along 600 feet of track snaked through the previous (And currently dormant)  "Kingdom of the Dinosaurs" attraction building in the park's Boardwalk section. 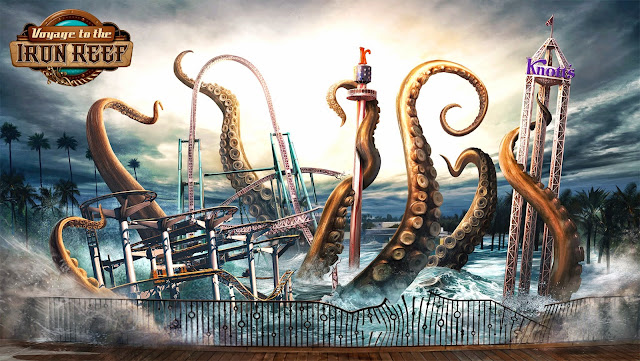 The Queen of the Kraken and her aquatic army have surfaced to feed on the steel of any attraction within their grasps. Their unquenchable appetite for coaster metal has turned these creatures into swimming mechanical monsters unlike anything ever seen on the ocean floor. 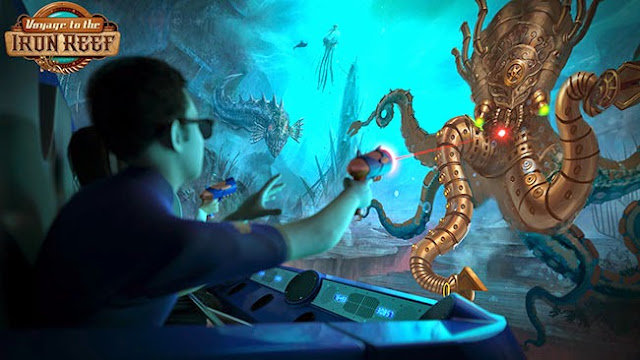 Guests who have what it takes to become brave deep sea navigators will climb aboard four-person submarine-inspired ride vehicles and embark on the four-minute gaming adventure into the Iron Reef. Equipped with an interactive freeze ray, guests will aim for ballooning puffer fish, an iron clad octopus and other exciting 3-D creatures as they attempt to blast the most sea life and save Knott’s from a watery doom.

Triotech did a great job on the now open Wonder Mountain Gardens 4D attraction at Canada's Wonderland which is very similar to Knott's new attraction, so I'm very excited to see this attractions outcome. Kudos to Knott's for continuing their development of Family and Story based attractions, which continues to give them a greater edge of uniqueness over the tense SoCal theme park competition! Like TPO's Facebook page to get the latest from the Amusement Park industry delivered directly to your news feed. www.Facebook.com/ThemeParkOverload My name's Nicholous, and Thanks for Reading!
Location: Knott's Berry Farm, 8039 Beach Blvd, Buena Park, CA 90620, USA