October 18, 2014
Today Theme Park Overload heads to Fright Fest 2014 at Six Flags Discovery Kingdom to bring you a Full Review and Photos from the entire event! 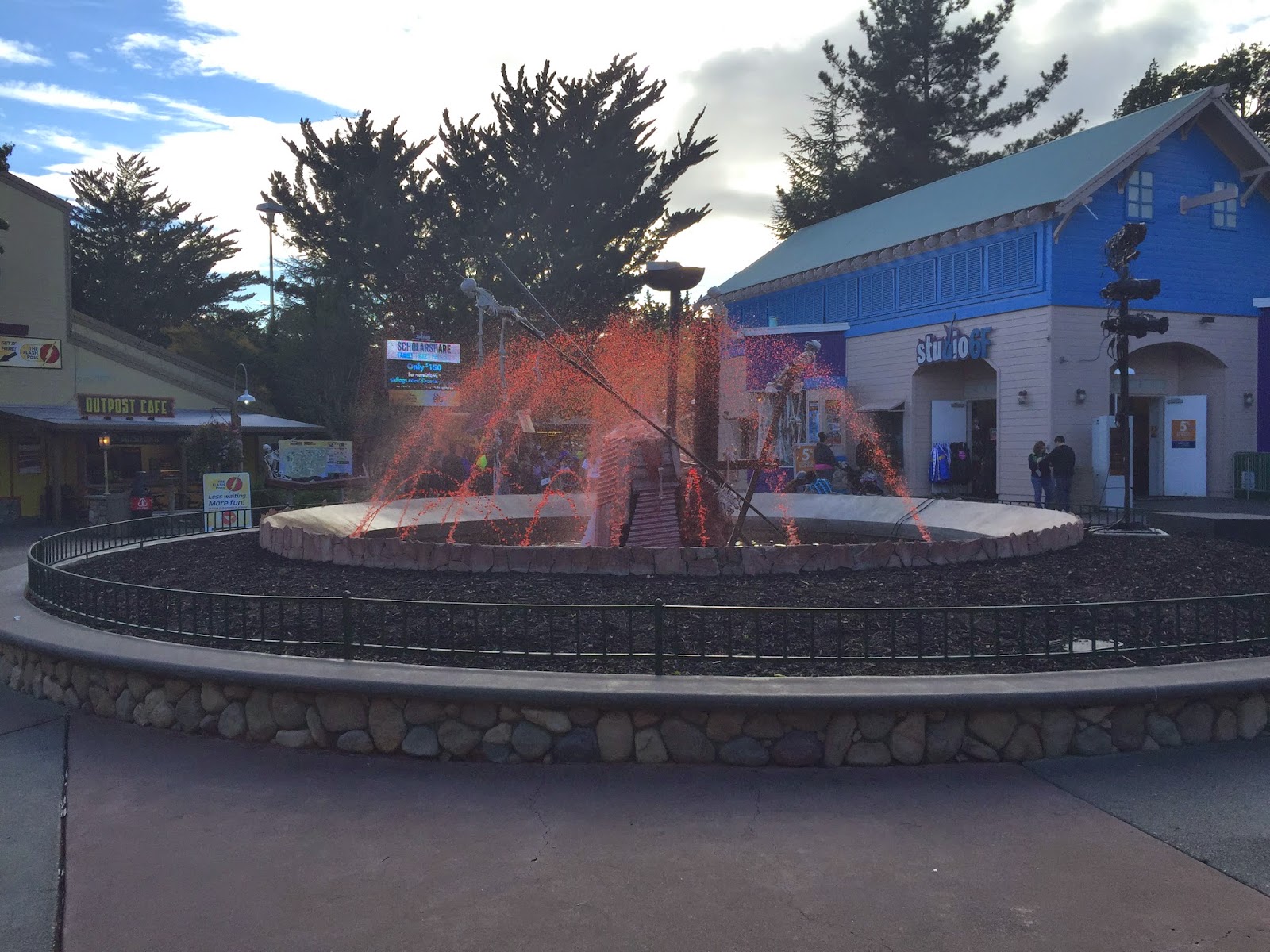 The park's main plaza has been filled again with its signature "Red Blood"! 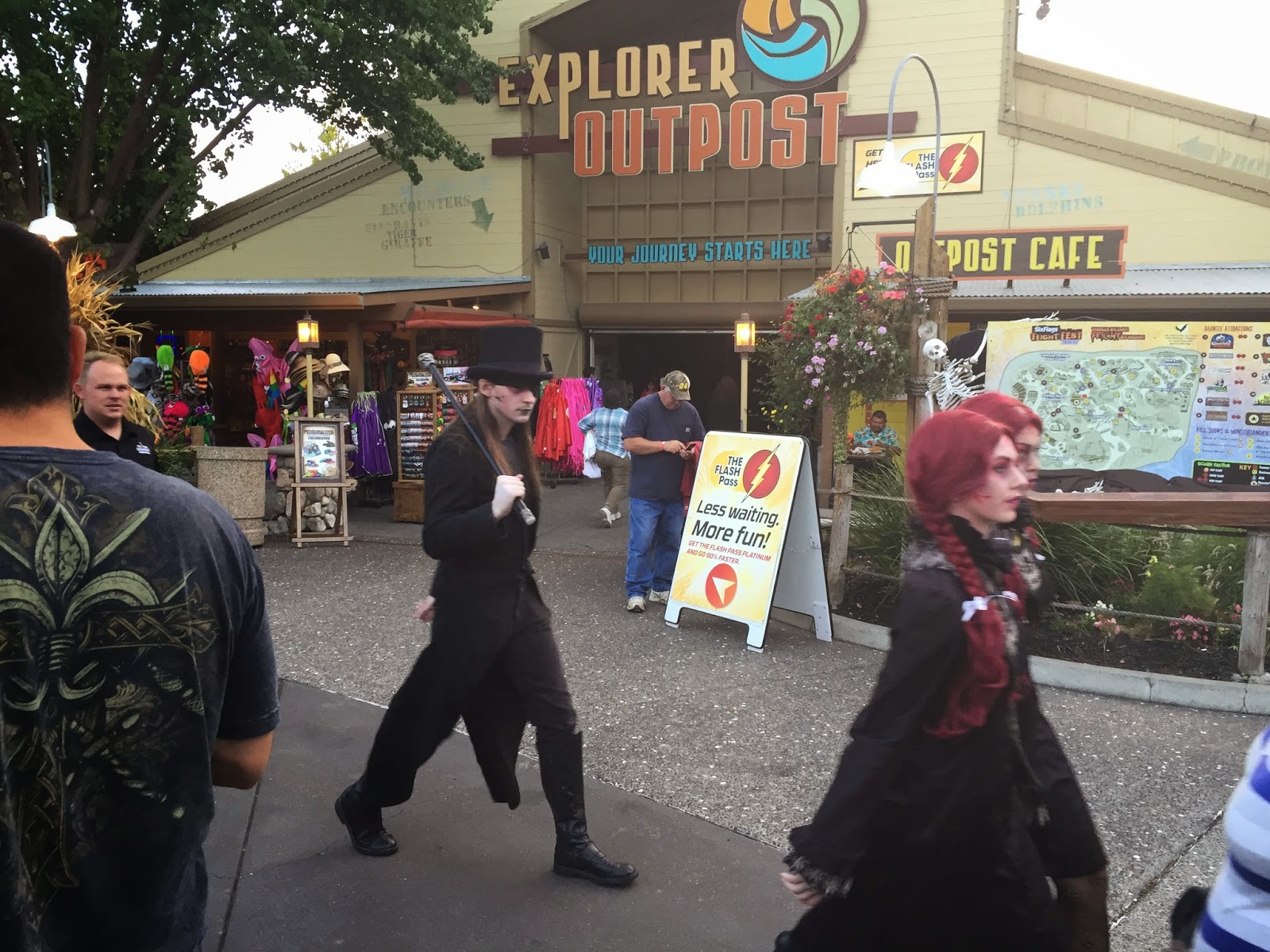 The Arsenic and Arania twins are headed to the main stage for the Awakening Opening Show! 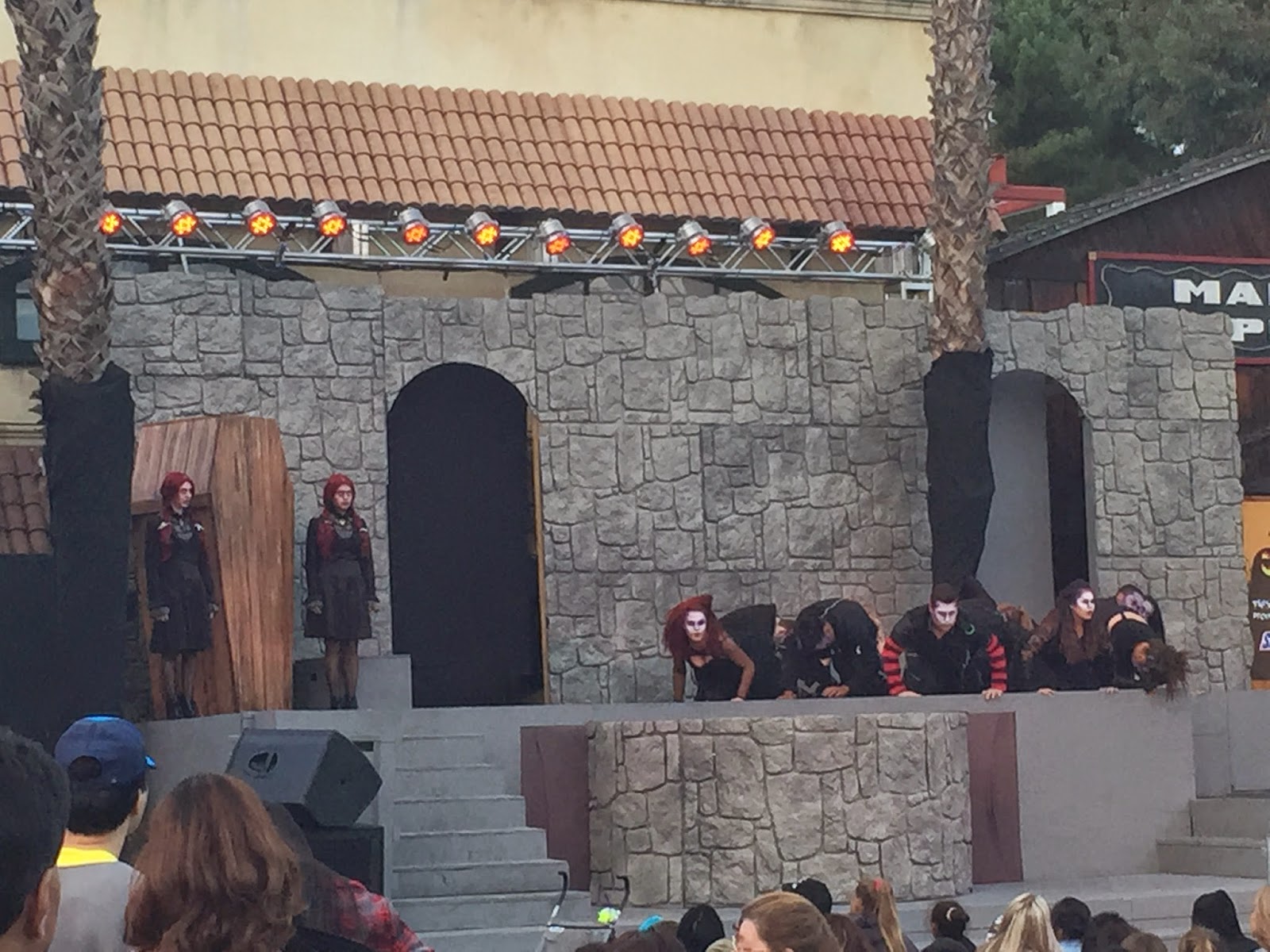 While the actual singing and dancing is a little mediocre, it signals the start of Fright Fest!

The Boathouse at Blood Lake 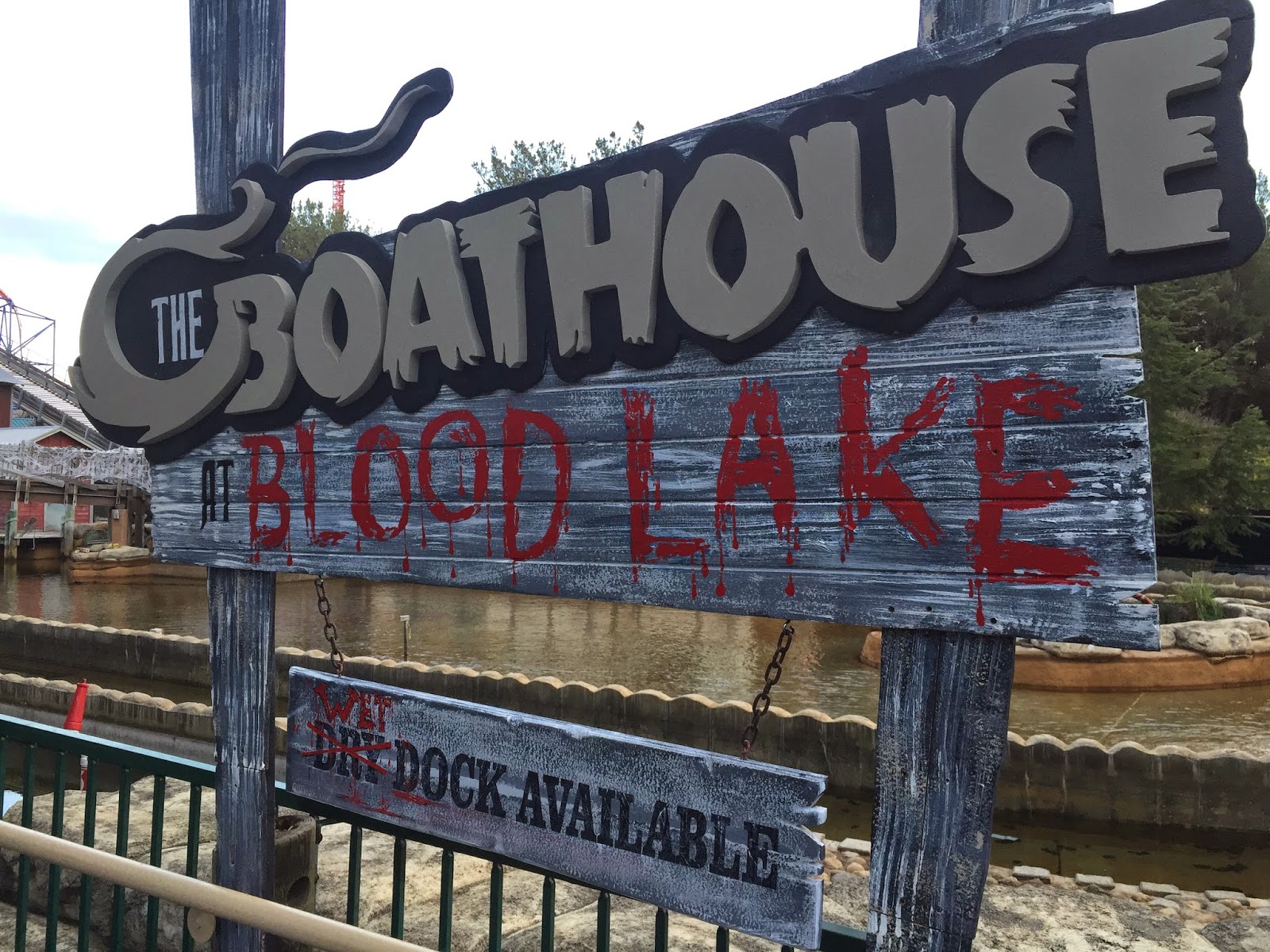 Rating: 8/10
Being the park's new maze for 2014, Blood Lake is a good replacement to the poorly executed Blackout maze from last year. The maze has some good props, and the storytelling aspect is conveyed well with the sets and actors. It also has an outdoor section at the end, which takes many by surprise because most guests assume the maze is over! Make sure to check this one out! 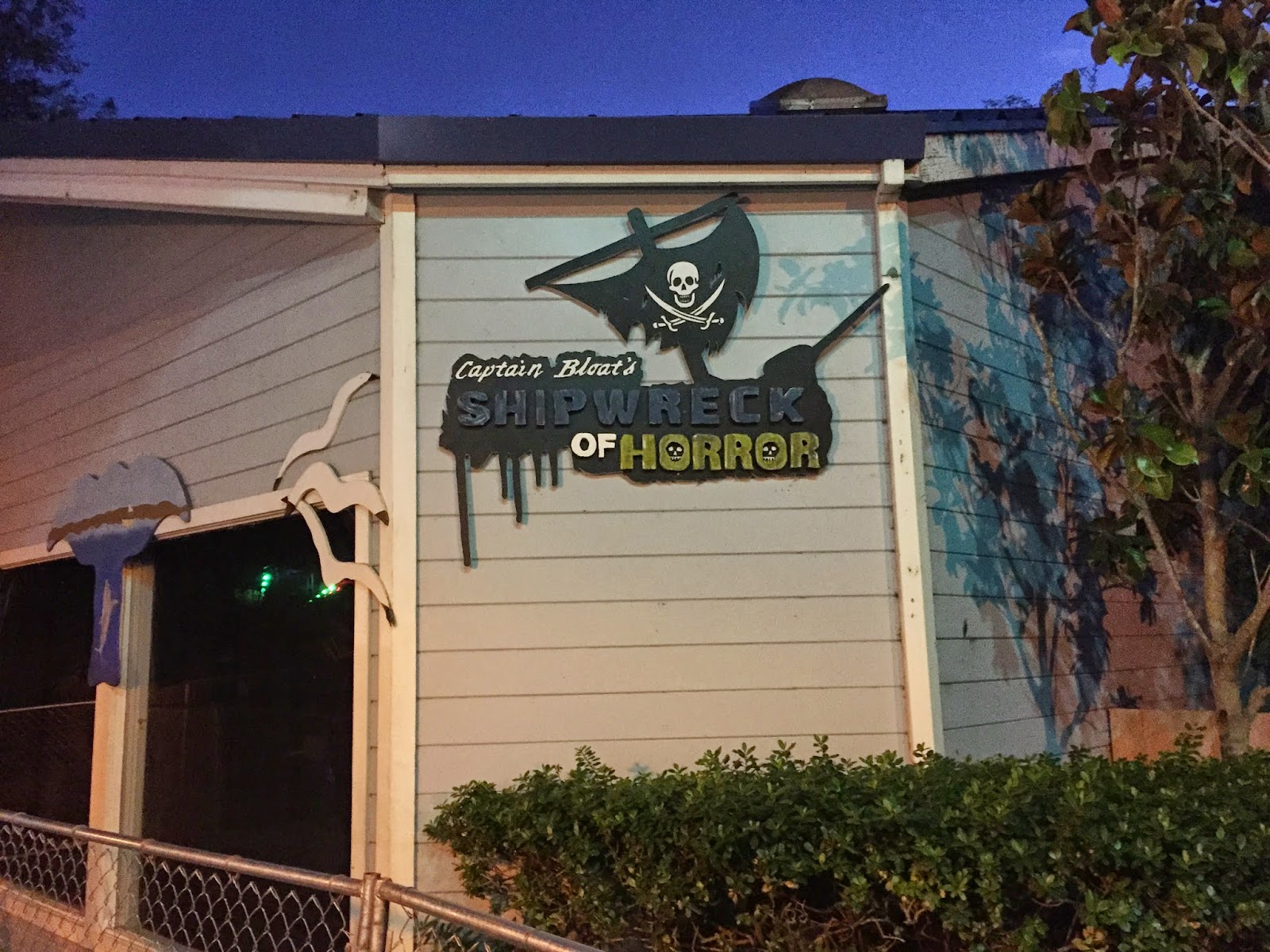 Rating: 7.5/10
As always, this is another one of the solid mazes in the lineup, Taking advantage of the expansive aquarium tanks inside the maze with live animals (The maze is inside the indoor Shark Exhibit) some cool looking facades and sets are morphed together! The actors in this one also do a great job with their delivery and scares, which is essential to a solid maze! Don't miss this one either! 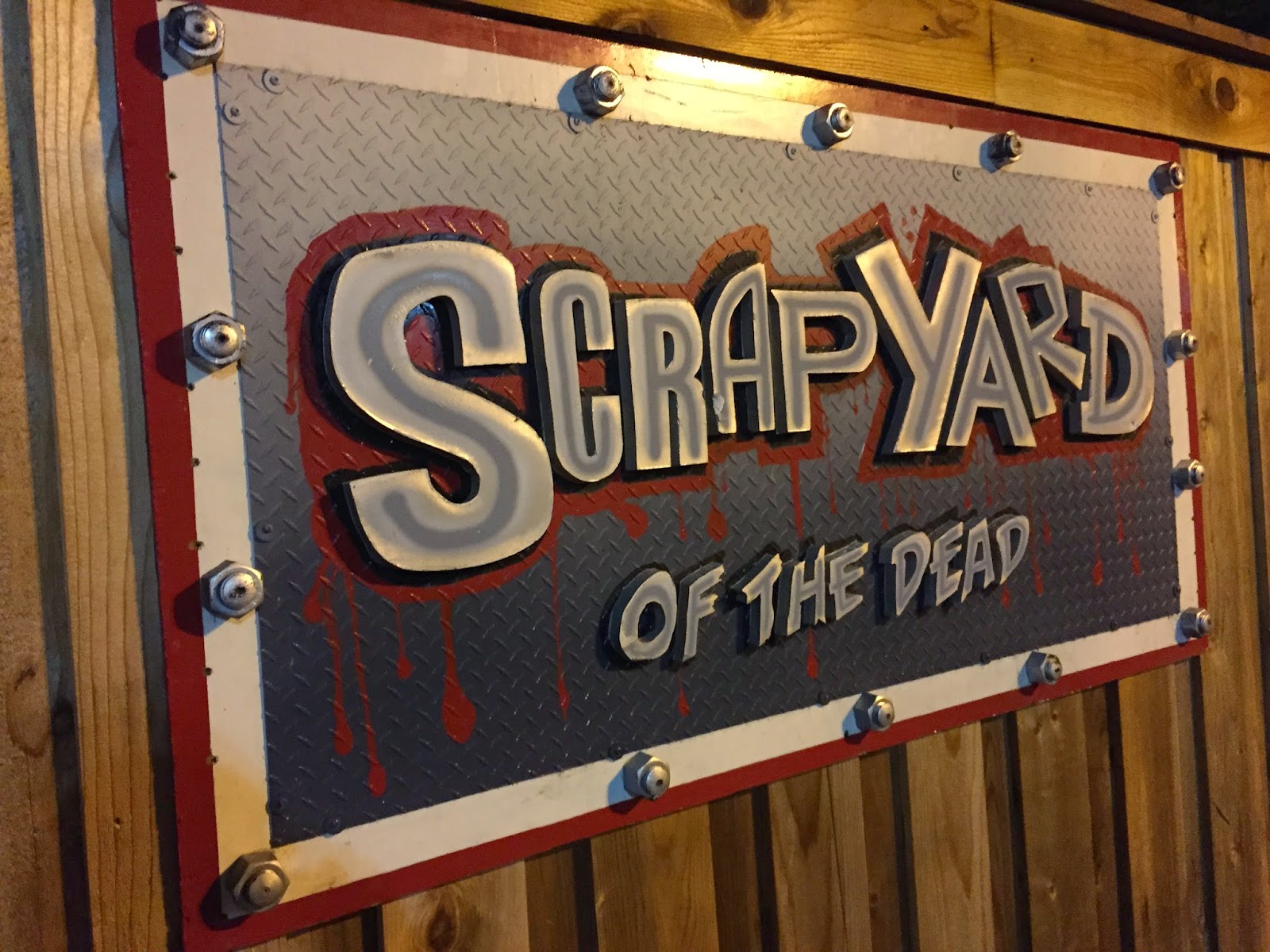 Rating: 6/10
Located entirely outdoors with chain link fencing as the entire perimeter, this maze has never had much to work with and isn't anything special. The actors are very critical to this maze, as without them it is LITERALLY just a twisty path with metal fencing. They delivered a pretty good performance on my way through, despite the lack of hiding places for them inside. If you're in the area by V2 and Roar and the line's short, give it a whirl. 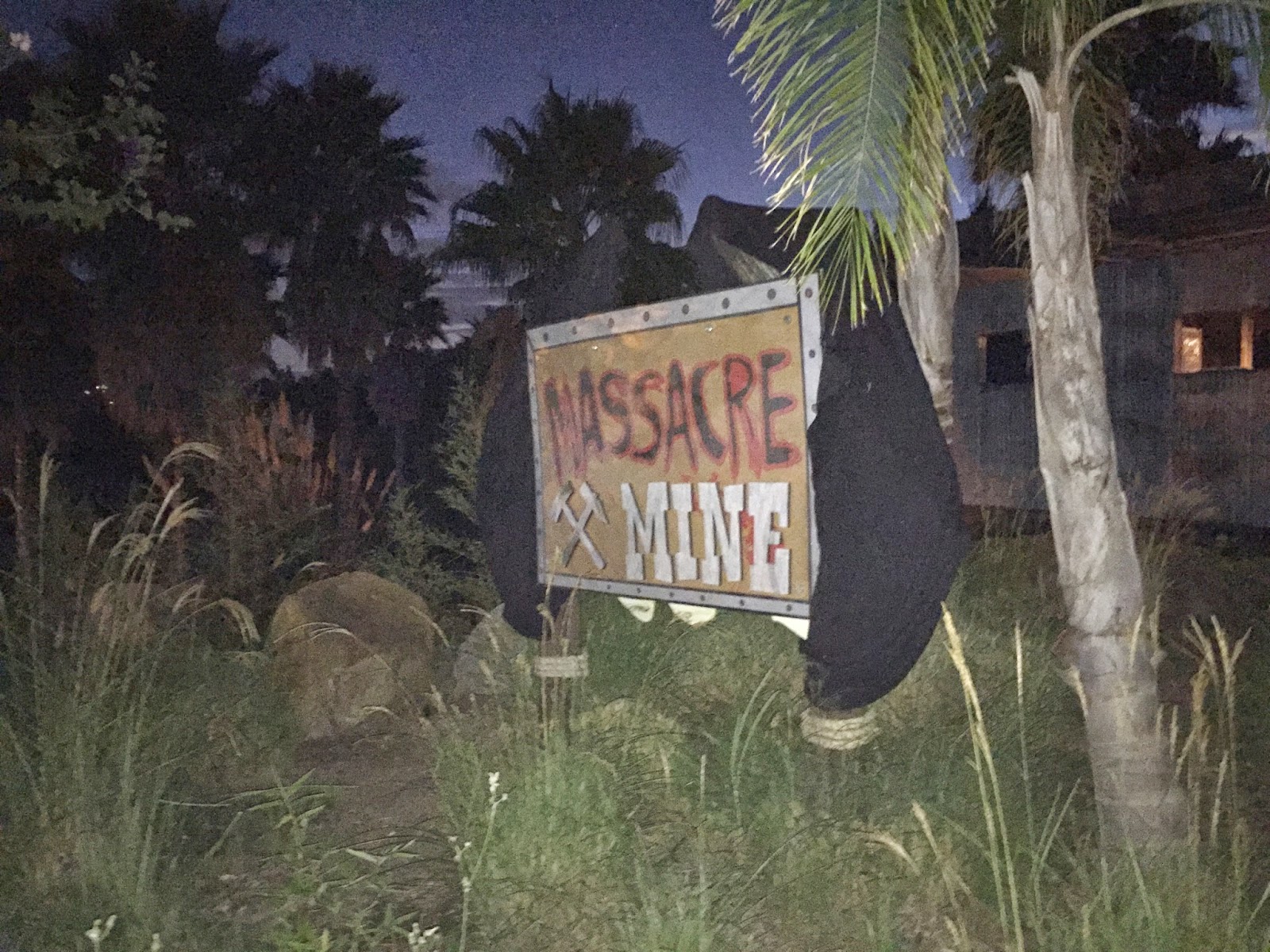 Rating: 6.5/10
This maze is interesting, as I can't fully understand the experience they wanted for it...let me explain. During the entire maze, their was no background noise or sounds of any kind, with the exception of the actors screams. This made it frightening in a sense, because hearing your footsteps in the dead silence adds suspense. On the other side, it doesn't deliver the story or theme as a "Massacre Mine" due to the absence of Sound FX like the other mazes. Still fun though. 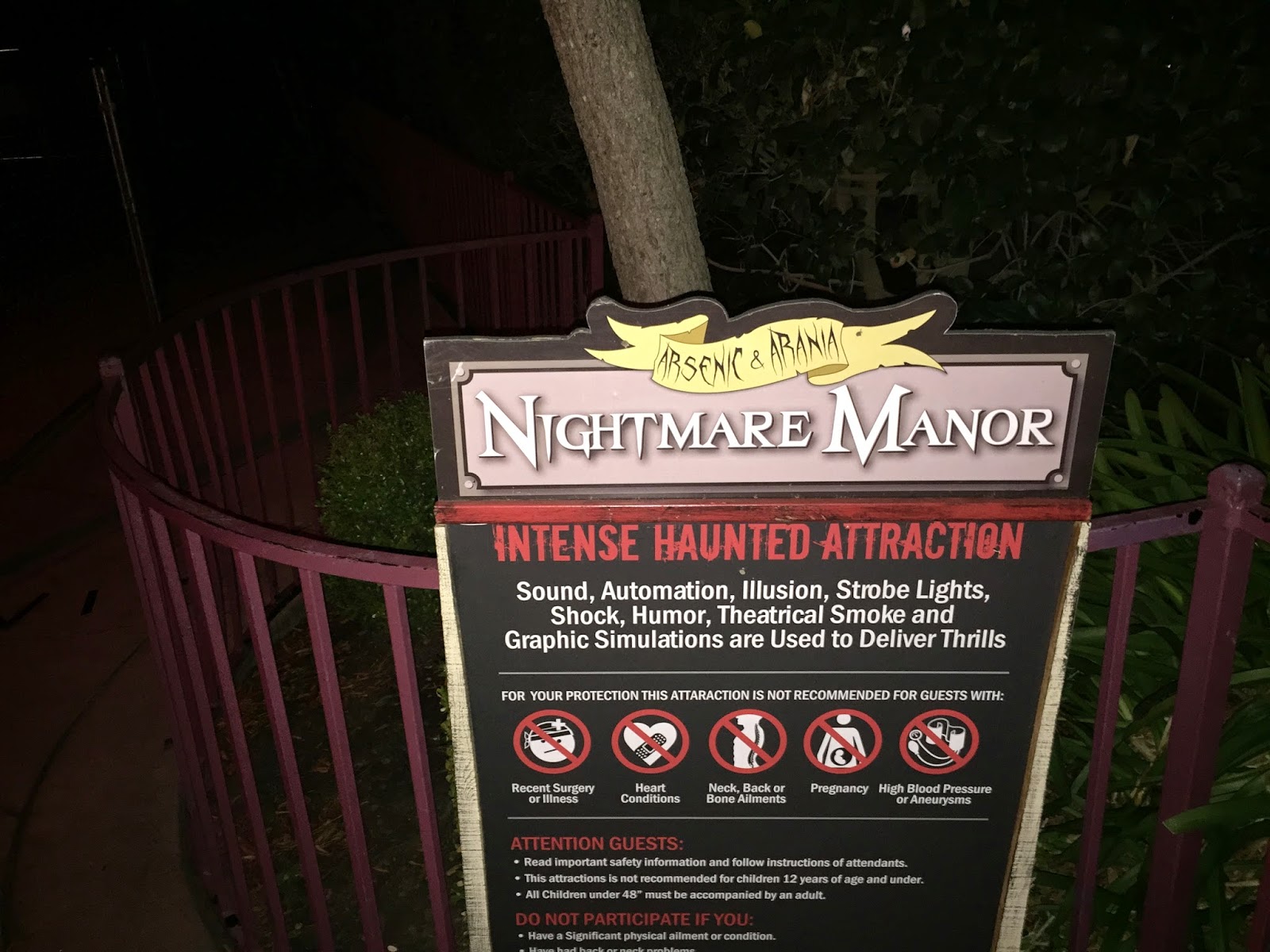 Rating: 7.5/10
Located in the Bumper Car Building, Nightmare Manor has always been a well balanced maze. It benefits from detailed sets, good actors, and a well conveyed story. My one complaint is the on ride photo station that the park added before the maze, as it just has a lame jump scare to actually scare you. 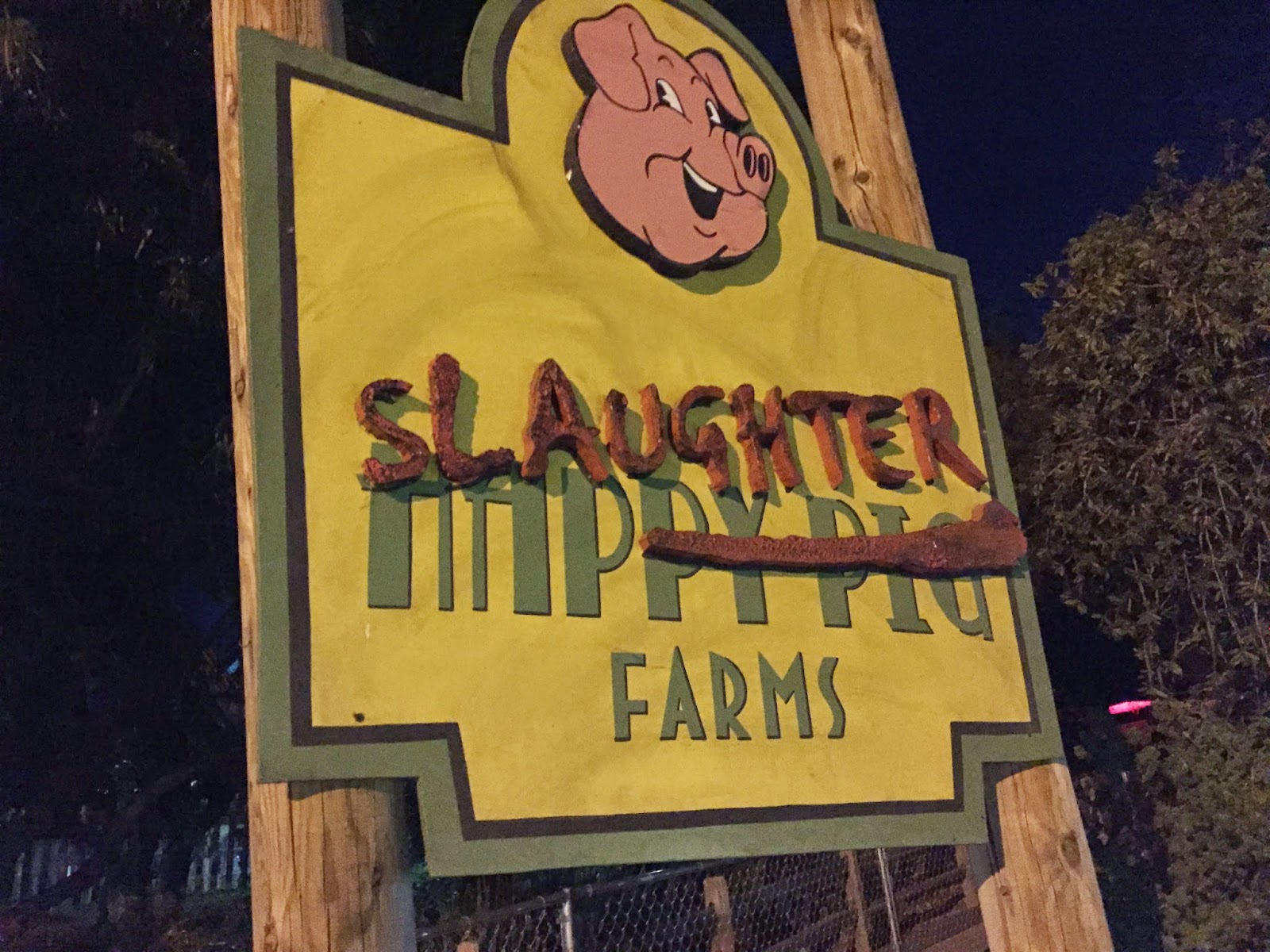 Rating: 9/10
As always, Slaughter House Pig Farm takes the cake as best maze. Its amazing sets, lavishly costumed actors, and great props makes it a fantastic maze. The combination of indoor and outdoor sets also add an entertainment factor to the maze. And that smell, my goodness! The park imprints a signature smell throughout the maze that, well, smells like a slaughter house should smell! If you do one maze the entire night, make it this one! 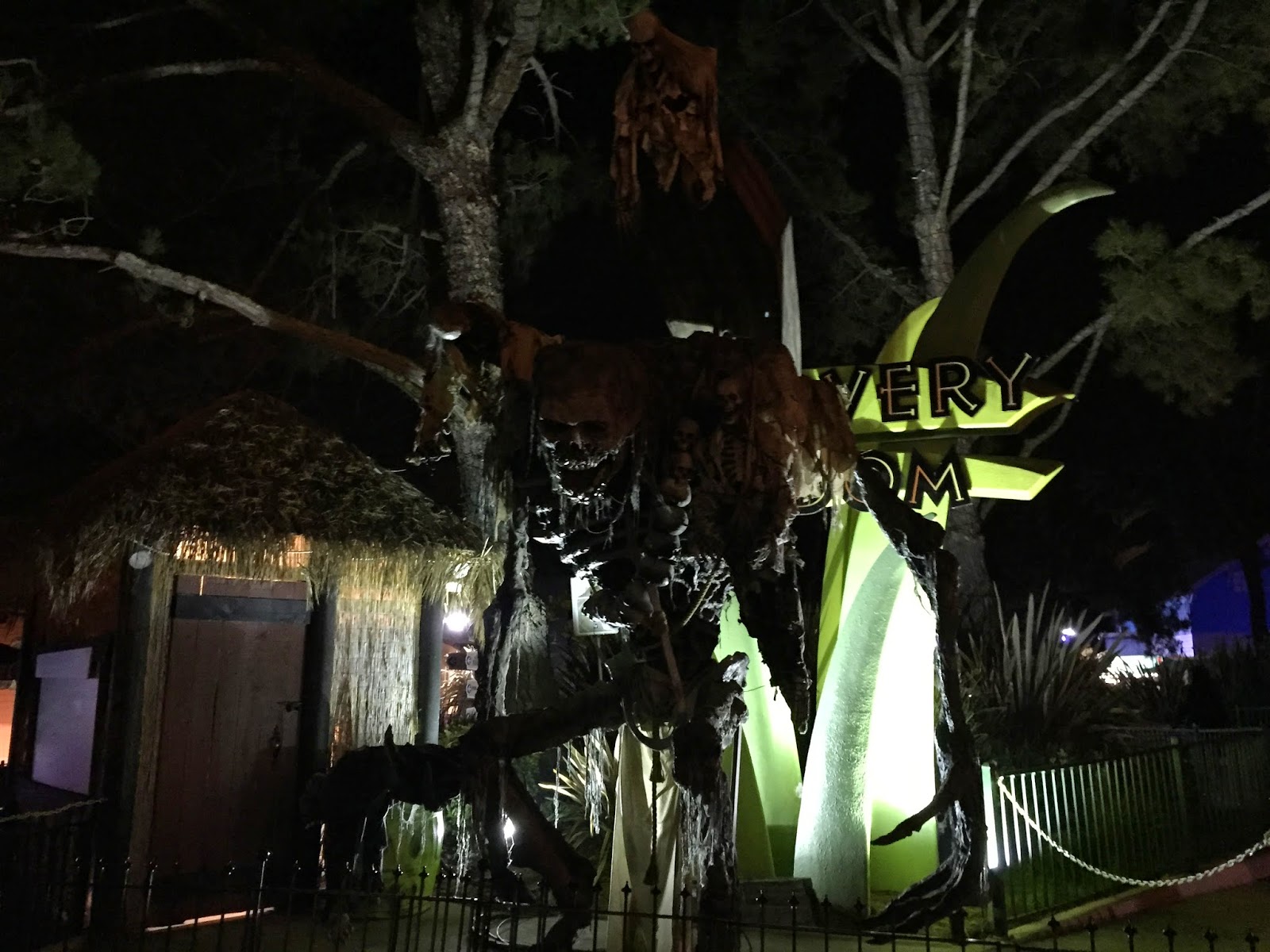 Don't forget to give this guy a warm goodbye on the way out!

Overall, the park's mazes were decent and comparable to previous years. Discovery Kingdom is one of the smaller parks in the Six Flags chain, so it's expected that their mazes aren't as big and grand as big brother Magic Mountain or Over Texas. Still worth a visit if you're a local park goer, because the mazes are still pretty fun!

That's all for now from Theme Park Overload. Special thanks to Nancy Chan and her team with Six Flags Discovery Kingdom for hosting us with an awesome event as always. Make sure to "Like" our Facebook page to get Exclusive Content and Live In-Park Updates! www.Facebook.com/ThemeParkOverload My name's Nicholous, and Thanks for Reading!
Location: Six Flags Discovery Kingdom, 1001 Fairgrounds Drive, Vallejo, CA 94589, USA
Nicholous Mirgoli
Nicholous Mirgoli is currently an undergraduate student at UCLA majoring in Economics and minoring in Urban and Regional Studies. He is actively pursuing a professional career in the Entertainment industry.