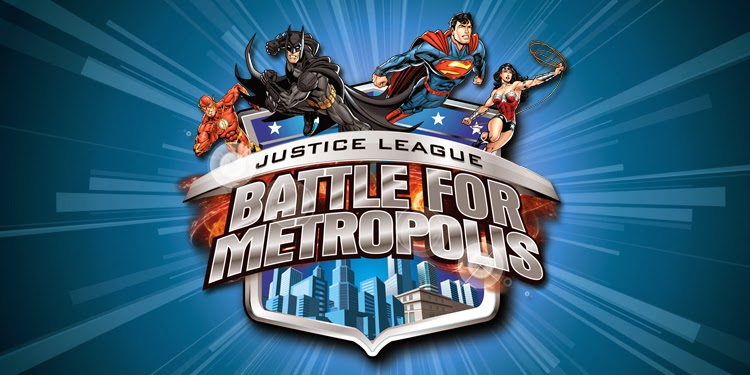 Today Theme Park Overload has a treat for you! We had the chance to talk with John Wood, Chairman/CEO of Sally Corporation. We talked about the new Justice League: Battle for Metropolis 3D Interactive Dark Rides that the company is installing at Six Flags Over Texas and Six Flags St. Louis for the 2015 Season. John gave us the inside scoop on this groundbreaking attraction, with new details that'll make you wishing it was Spring 2015 already! 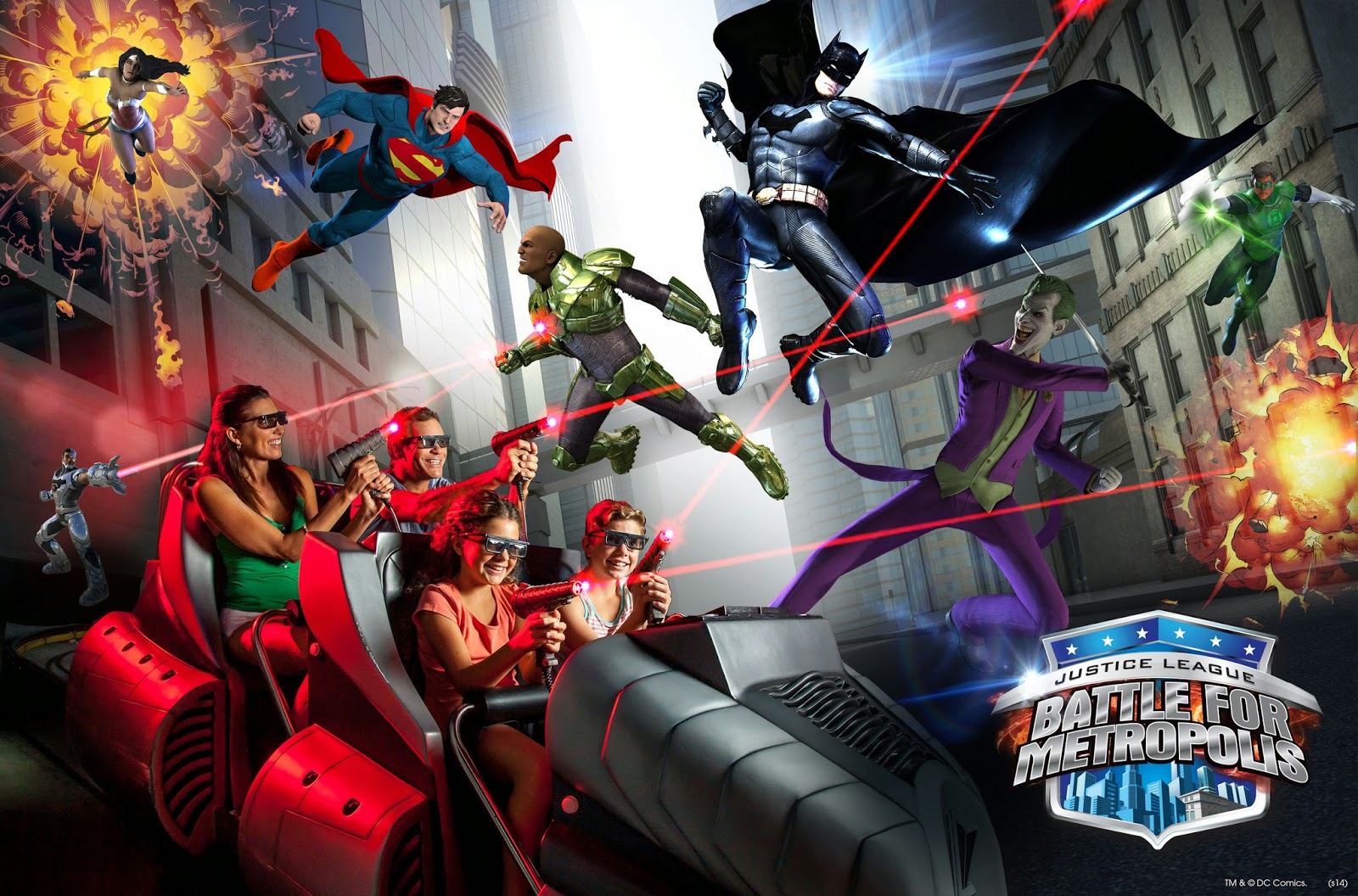 John was very adamant about the newly designed ride vehicles Metropolis will feature. They will be tracked, motor driven  6 seater vehicles that have the ability to quickly accelerate and stop. They'll feature 4 ranges of motion (Forwards, Backwards, and Side to Side) that'll correspond to the on-screen action. Oceaneering is designing the technical aspect of the vehicles, with Sally Corporation in charge of the cosmetic design. The Six Flags Over Texas location will feature 10 vehicles, while the Six Flags St. Louis location will have 7. 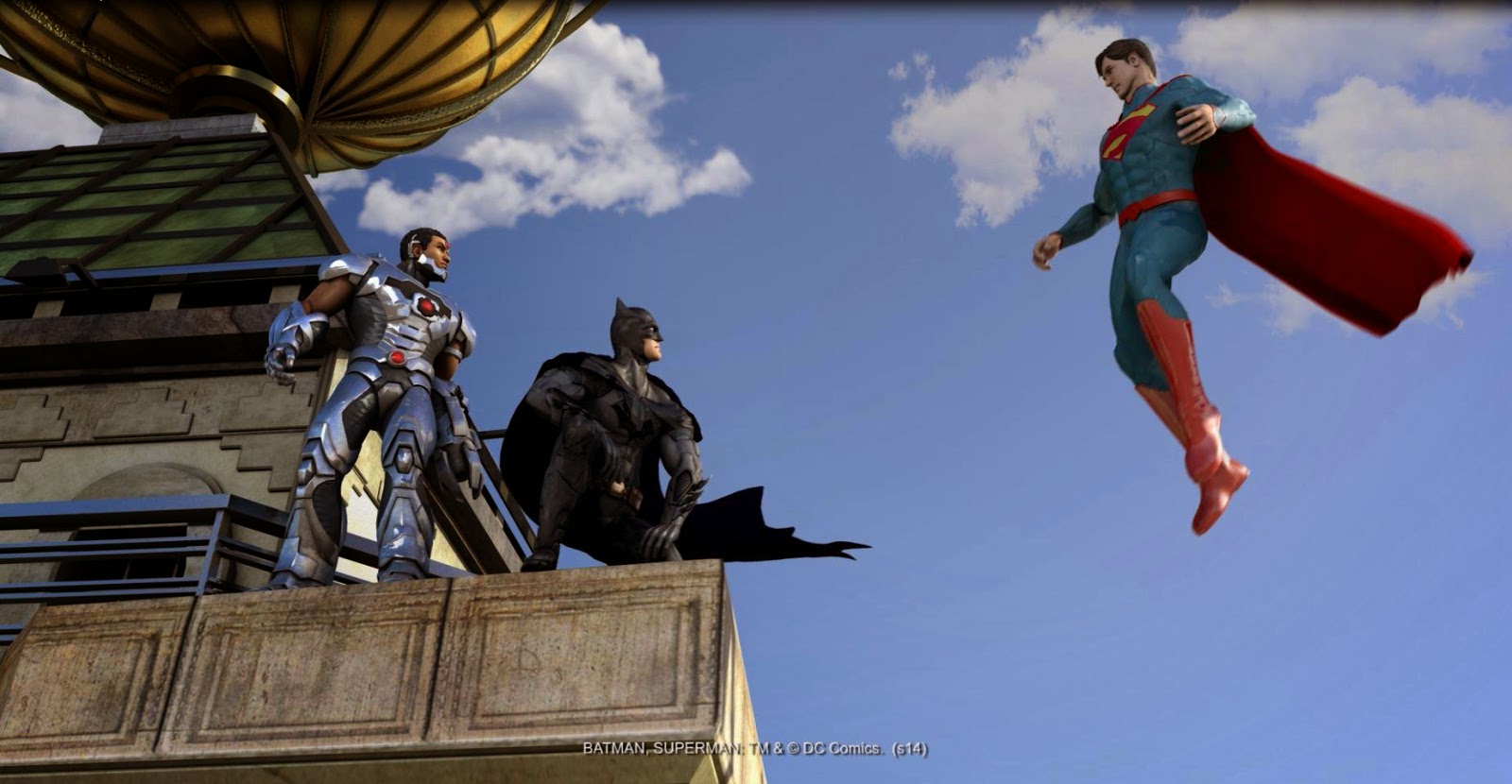 Pure Imagineering is designing custom 3D CGI animation that'll breath new life into the Justice League franchise. 8 3D Screens will be located throughout the attraction that'll blend with the physical elements of the ride designed by Lexington Scenic. Using the proprietary shooting system designed by Alterface, guests will be able to use the In-Vehicle guns to shoot both physical and digital targets. The attraction will feature 2 chase scenes towards the end of the ride, where the screens will become their largest at 30 feet wide to complete surround riders. John wasn't sure of the actual screen resolution (Full HD or 4K), but emphasized that it'll be "As good as it can get". 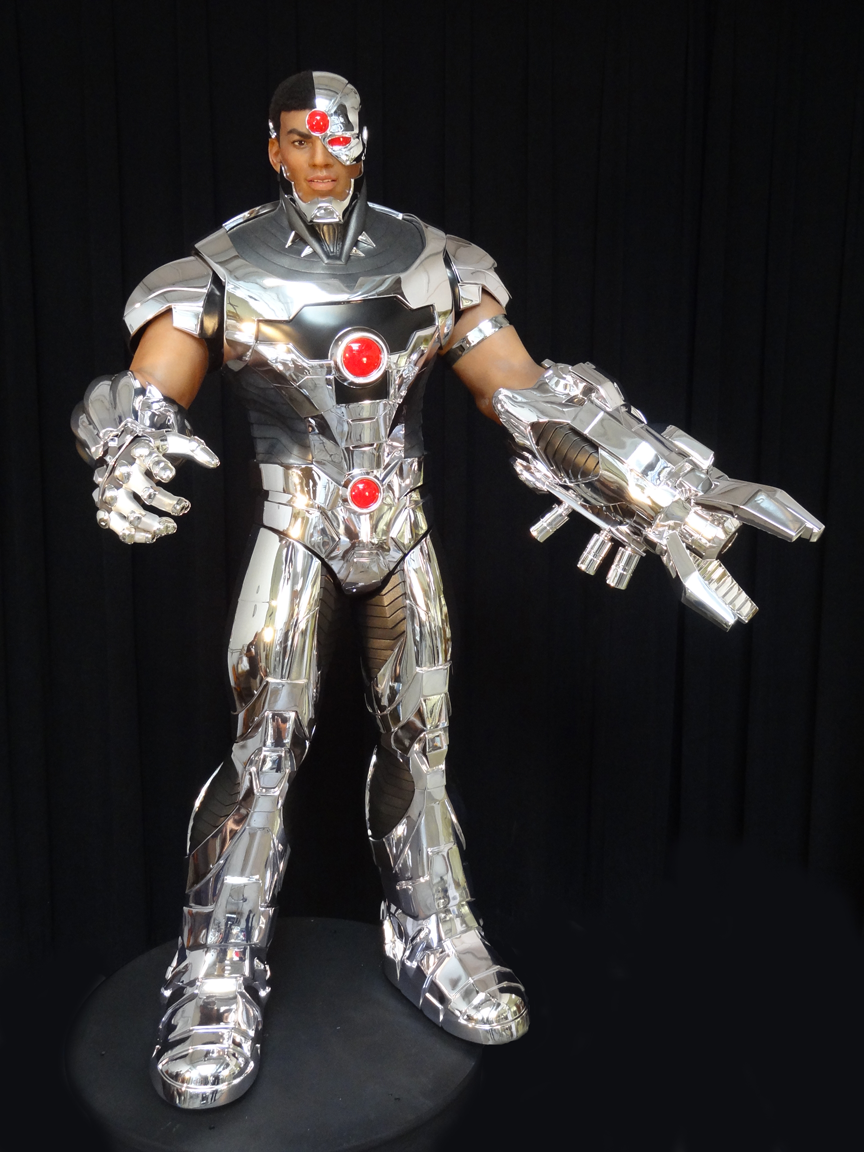 Sally Corporation is working with 15,000 square feet of space at both locations. At Six Flags Over Texas, the ride will be located in the old Action Theater, with an additional new extension being built on the side of the theater to further enlarge the building. At Six Flags St. Louis, the ride is replacing the current Scooby Doo Ghost Blasters: Mystery of the Scary Swamp attraction that's set to close on September 14, 2014. John noted that the St. Louis location will be slightly more difficult, as the Scooby Doo attraction building currently is a water attraction. The water will have to be drained, as well as modifications to the ceiling height due to clearance issues.

Battle for Metropolis will feature 2 different Animatronics Figures throughout the ride. Cyborg (Pictured above) will be located in the queue line to give guests the initial ride briefing. He will be in charge of informing riders of "Metropolis's Current State" that Green Lantern, Wonder Woman, The Flash, and Supergirl have been captured, and that the Justice League needs your help to rescue them. Additionally, a Joker Animatronic Figure will be located inside the ride itself.

The ride in total will be 3 minutes and 20 seconds, not including loading/unloading times. The main man behind the project is Sally Corporation's own Rich Hill, who also worked on the highly successful Justice League: Alien Invasion 3D dark ride at Warner Brother's Movie World in Australia. John added that he is very excited to finally turn these projects into real life, as Sally Corp's been pitching the idea of a dark ride to Six Flags for almost 15 years. Battle for Metropolis itself has been in development for a little over 2 years now, since 2012.

We are EXTREMELY excited of Six Flag's new venture into the Dark Ride space, and hope to get out to at least one of the locations to give this thing a spin Spring 2015! Big thanks to John Wood and Sally Corporation for speaking with Theme Park Overload today. That's all for now from TPO! Make sure to "LIKE" our Facebook page to get the latest news and rumors delivered straight to your inbox! Facebook.com/ThemeParkOverload My name's Nicholous, and Thanks for Reading!
Location: 745 West Forsyth Street, Jacksonville, FL 32204, USA