June 15, 2014
Today we're at the most profitable Six Flags park in the country, Six Flags Great America! Nestled just between Chicago, Il and Milwaukee, WI, this well rounded theme park has a great mix of thrills and amusement park "atmosphere" to back it up. We took our first ever visit to the park this week, and had a great time! But don't worry, we'll share some of the fun we had with you right now, because sharing is caring! 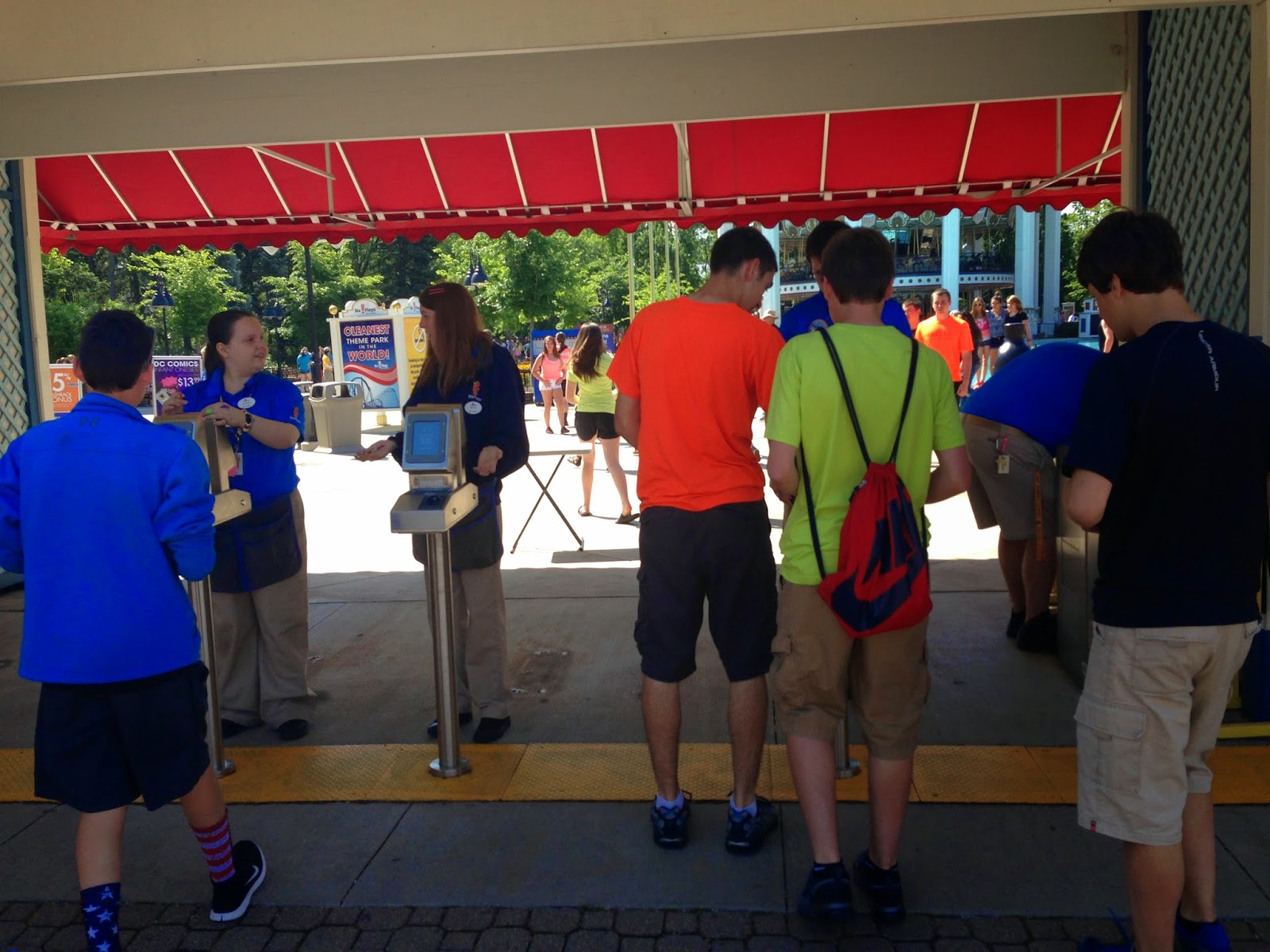 Yes, Six Flags Great America has biometric fingerprint scanners too (All the Six Flags parks in the chain do). I still haven't decided whether or not they're good or bad, what do you guys think? They don't really speed up entrance into the park, but do add the convenience of not needing a Photo on your card. I guess I'm just neutral on the subject. 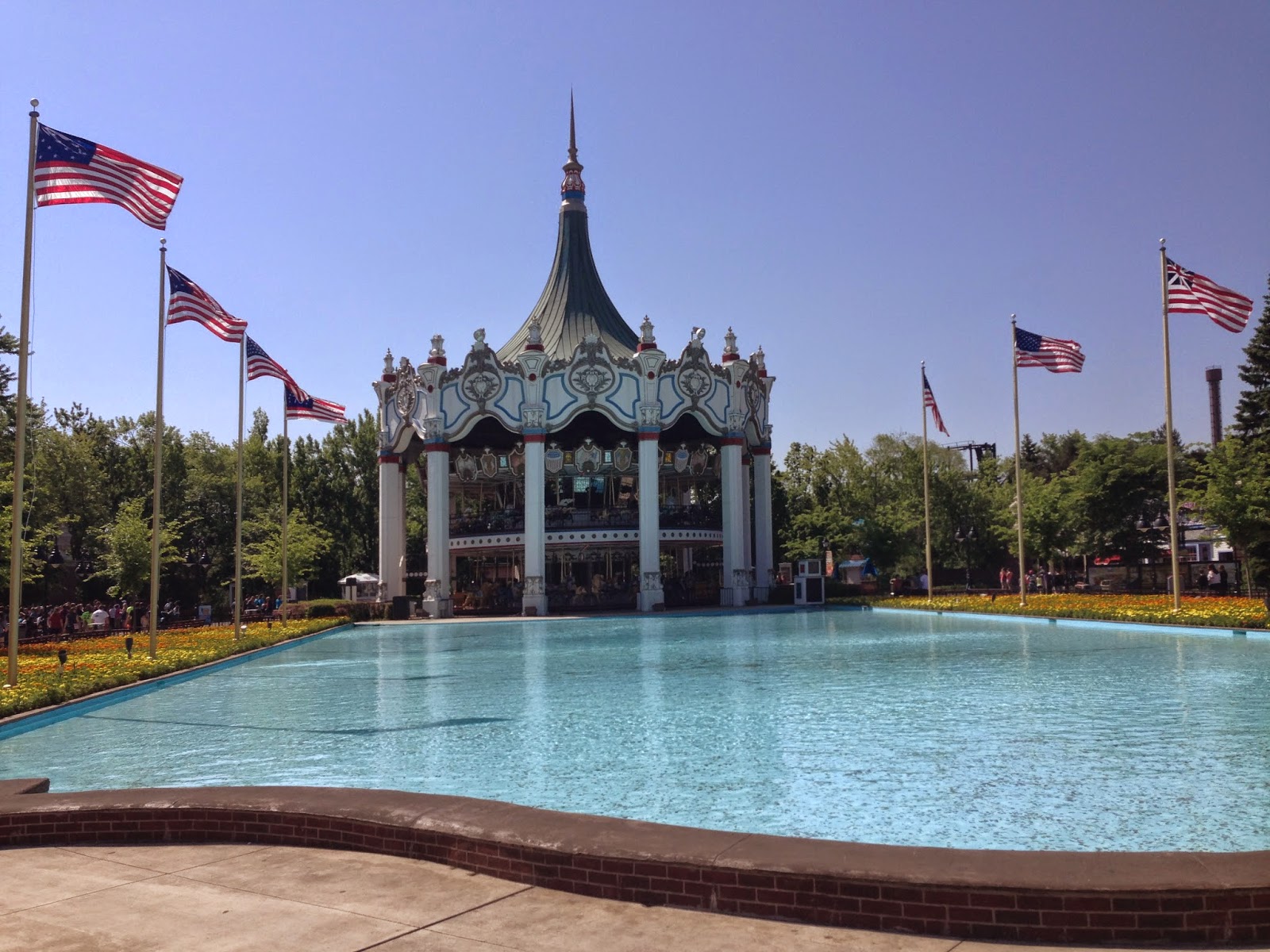 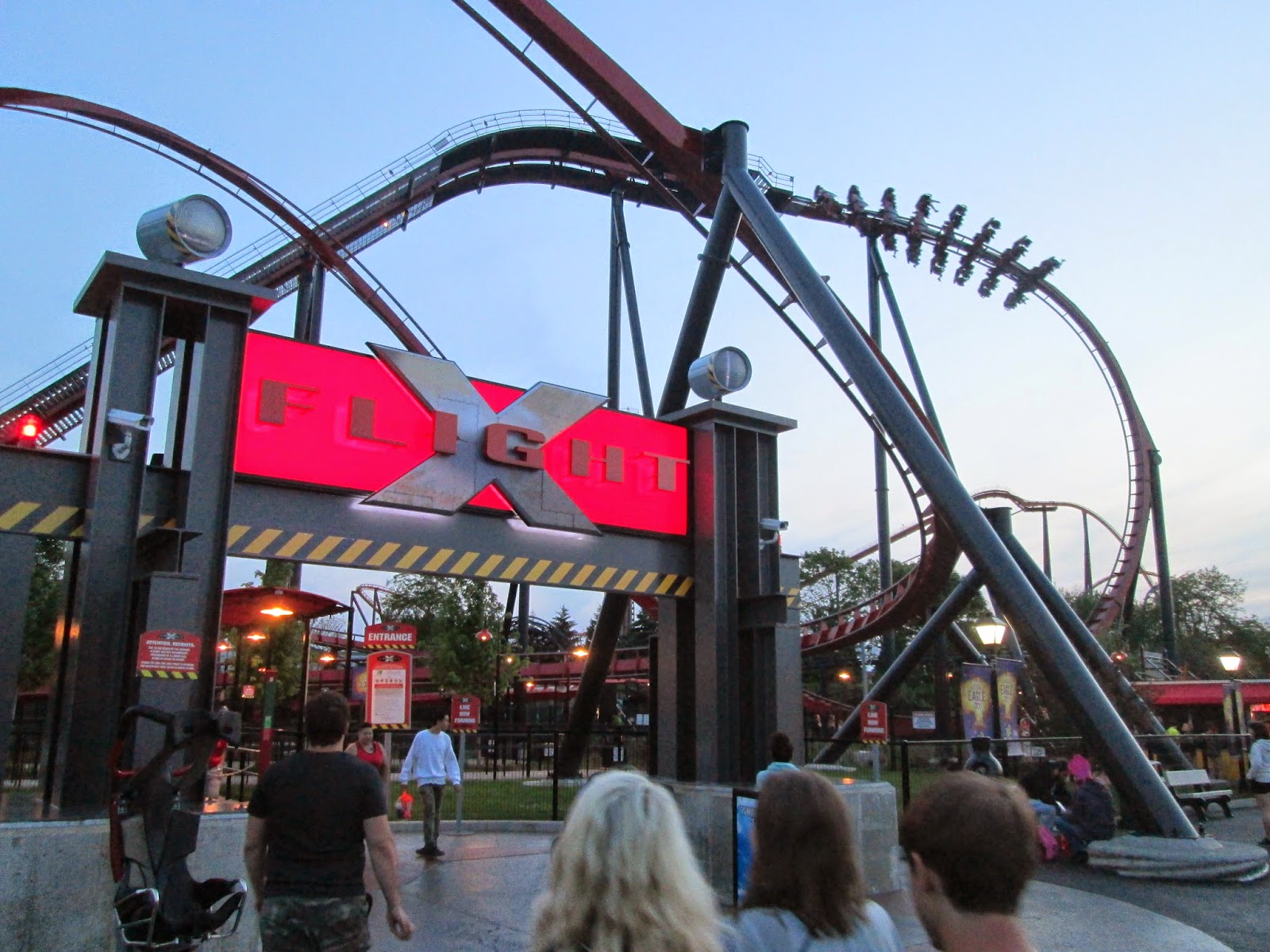 X-Flight was my go-to ride for the beginning! 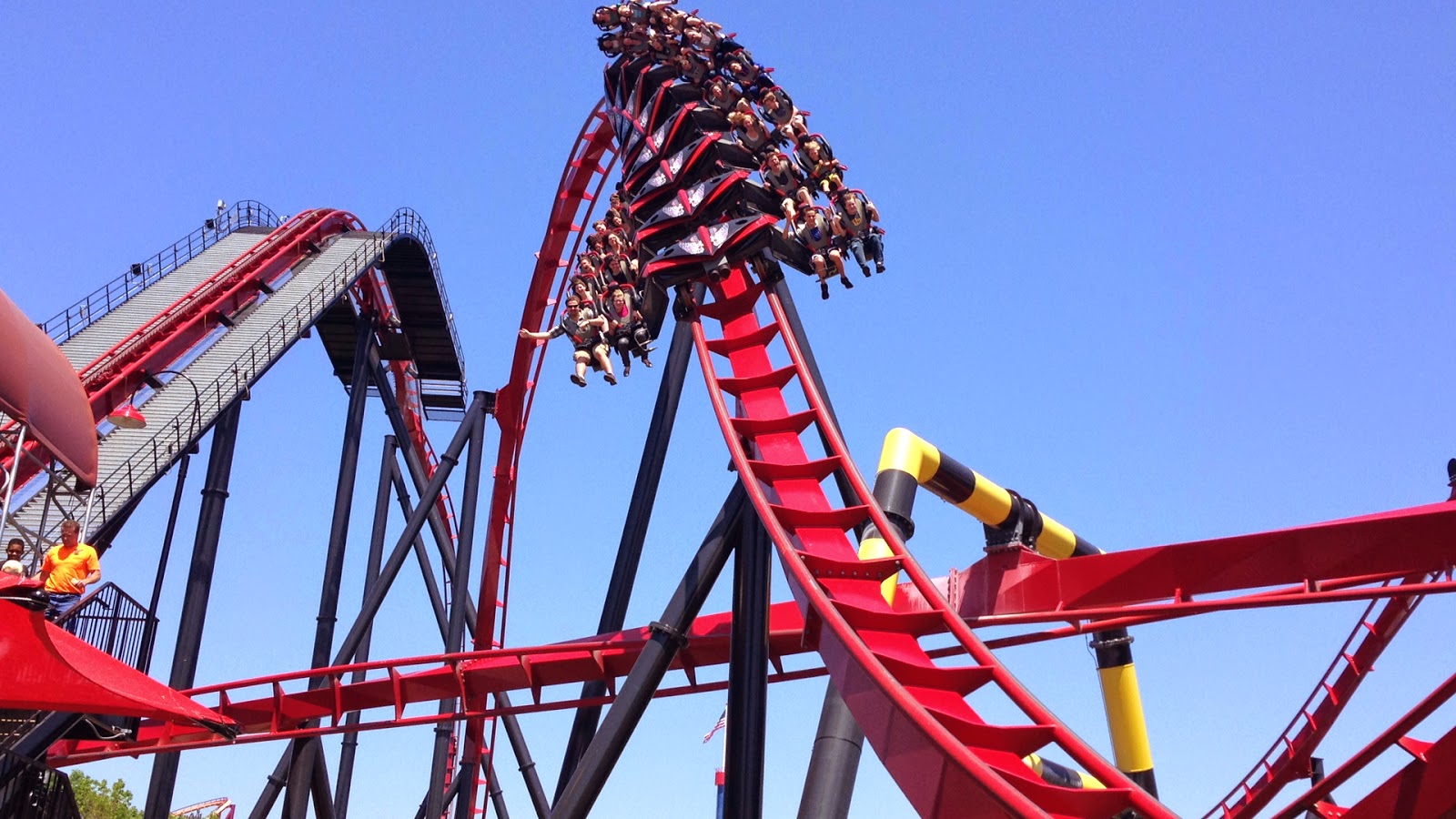 This is definitely a back-seat type of ride. I rode once in the second row left side and wasn't very impressed. It seemed slow and repetitive in relation to the forces and actions the train was performing. But man, I rode it again in the back row right side, and it was like a whole different ride! It feels so much faster and exhilarating in the back, such a different experience! 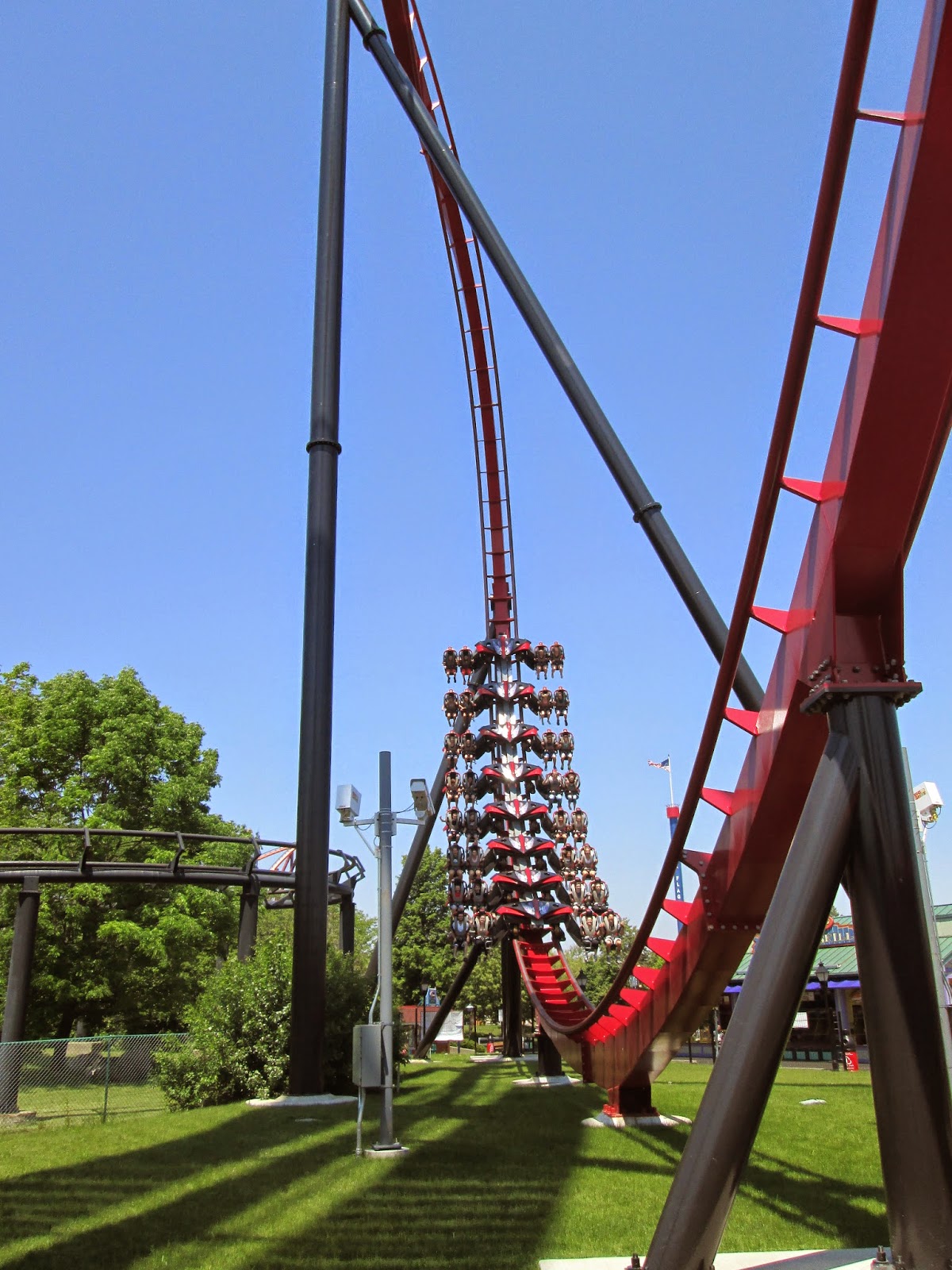 Something different with Six Flags Great America (And Six Flags Fiesta Texas) is their attention to detail and theming. For X-Flight: there's speakers on the lift hill as the train climbs up, all employees are given special "flight" jumpsuits, many headchopper elements are built throughout the ride for the track to interact with, and more! That attention to detail really brings that well rounded park experience that keeps the rides more interesting, especially for those who've ridden it before! (*Cough* Disney Parks) 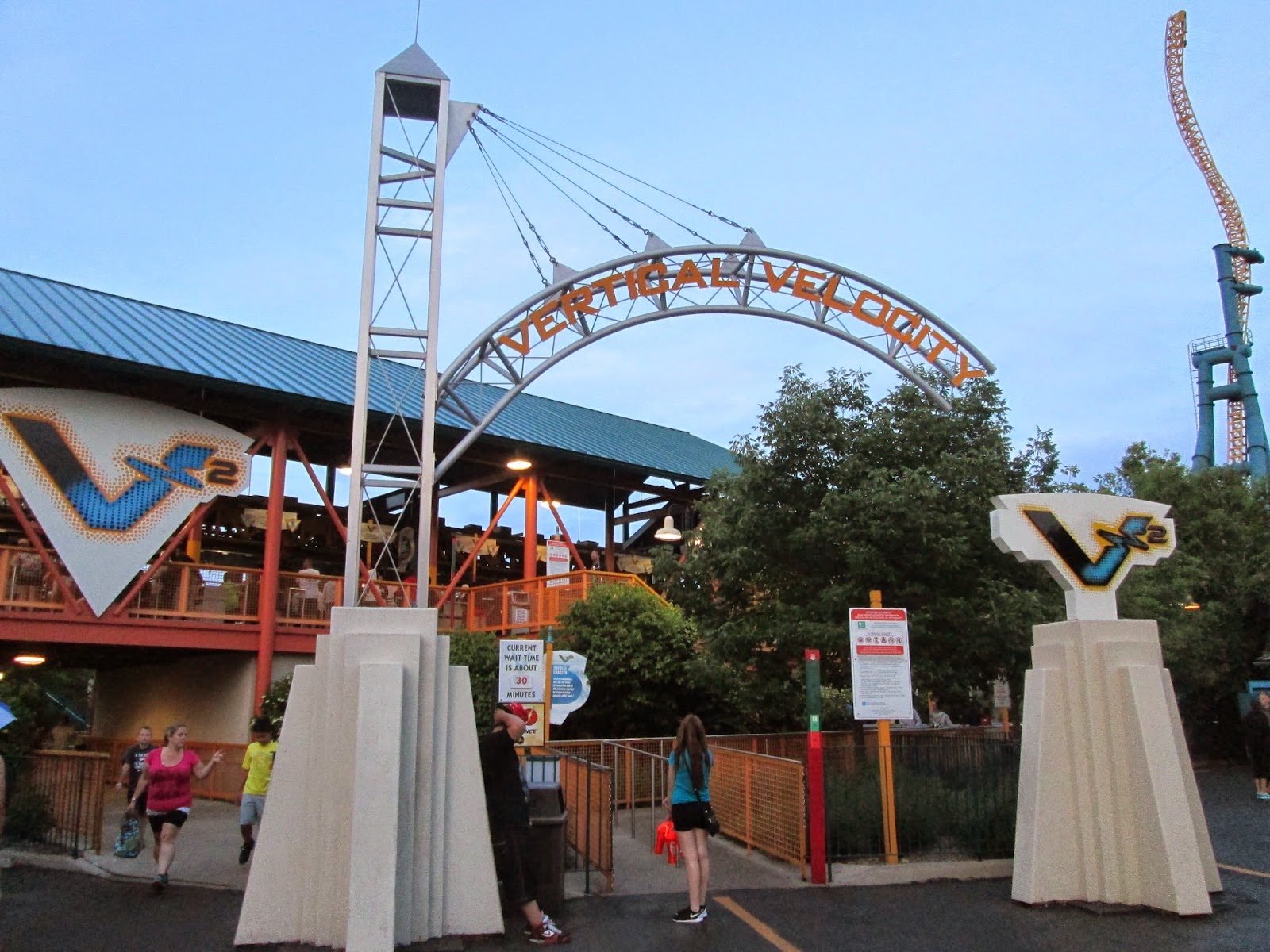 What's this? An Intamin Impulse Coaster that the City of Vallejo HASN'T altered? (All of you Northern California'ers should be getting these jokes, it's amazing how many ties this park has with NorCal's local parks!) 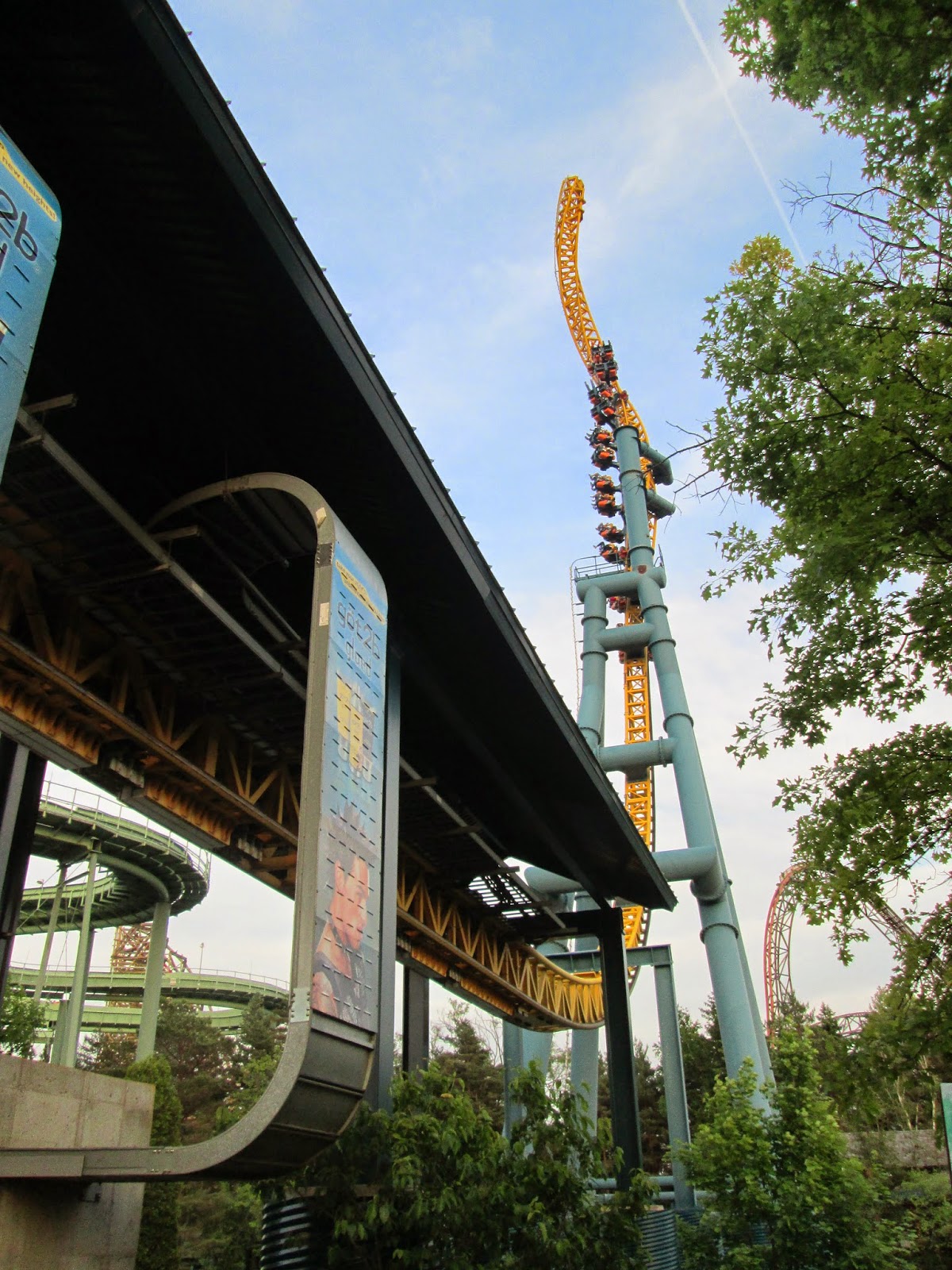 My slightly longer wait for the front row was definitely worth it! I've ridden V2 at my local Six Flags Discovery Kingdom countless times, but the un-altered 90 degree twisted spike adds so much to the ride. That sensation of seeing the track end just feet above you is fantastic! Not to mention, this version runs about 10 MPH faster than SFDK's. 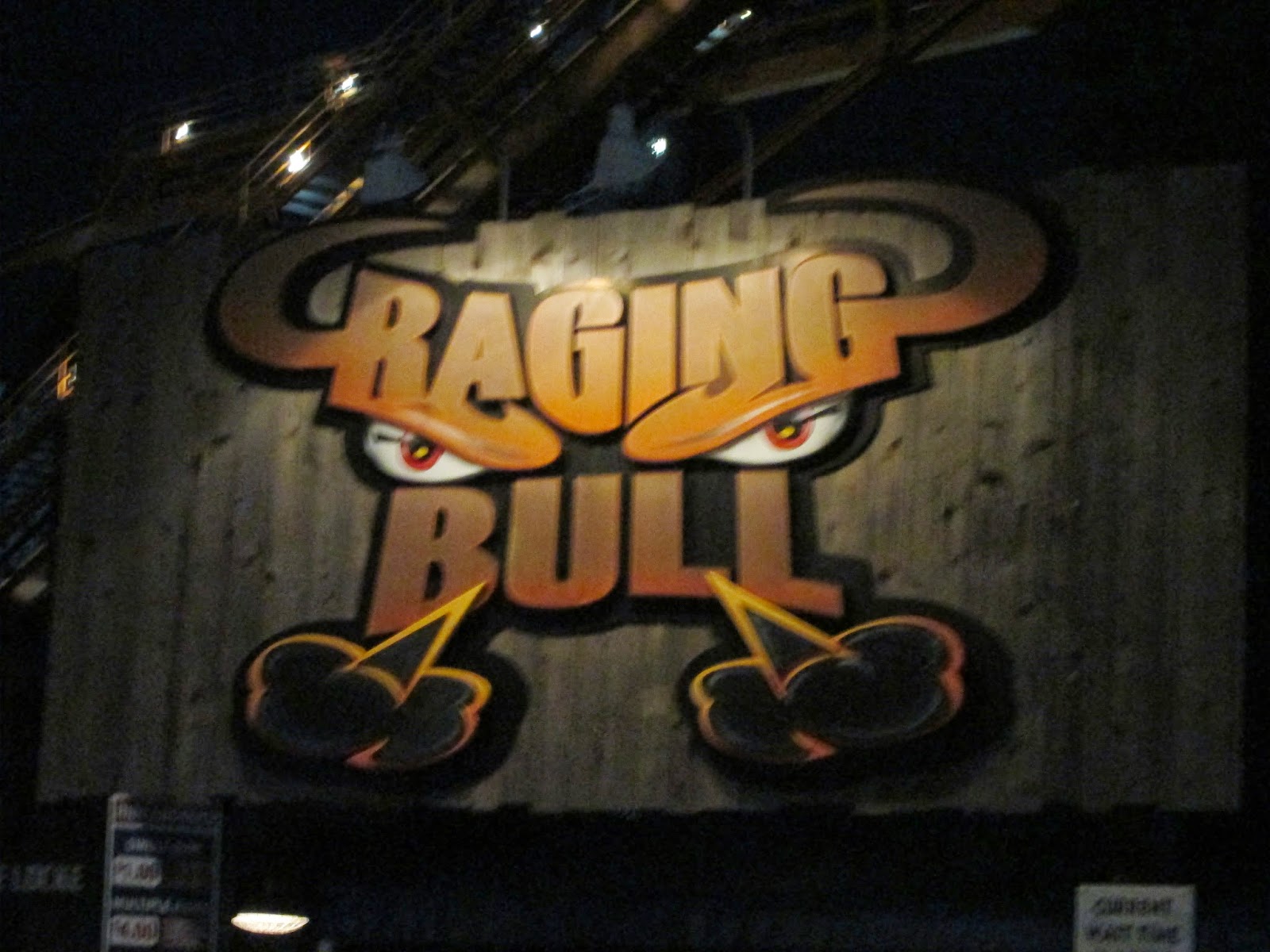 Now for the signature ride of the park, Raging Bull! 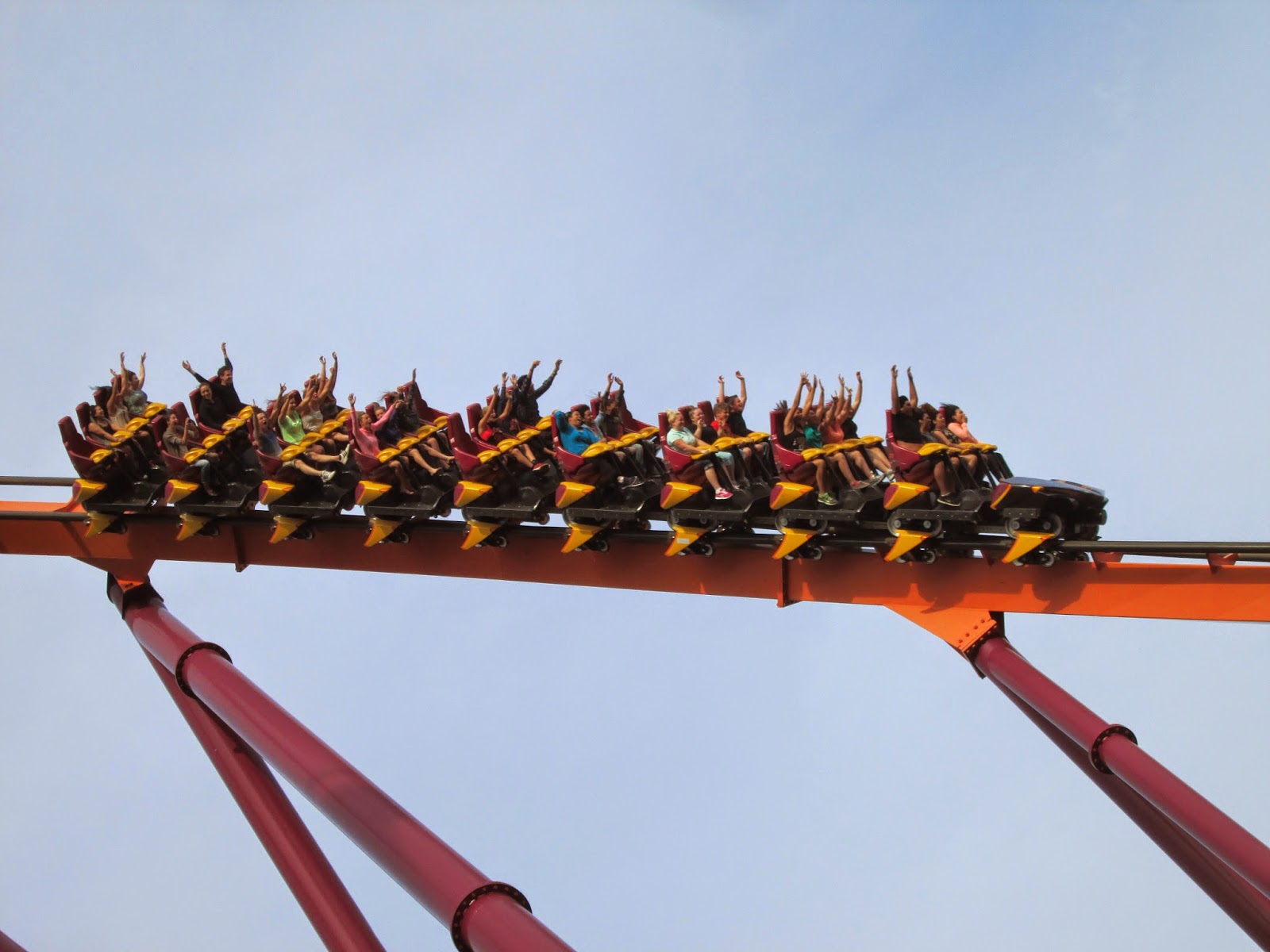 Due to my Theme Park traveling mostly being to Texas and California, this was my First B&M Hyper Coaster. I had a great time on it, and can see why it's so loved by park fans. Surprisingly enough, this year is RB's 15th anniversary! It still runs like new, almost butter smooth! 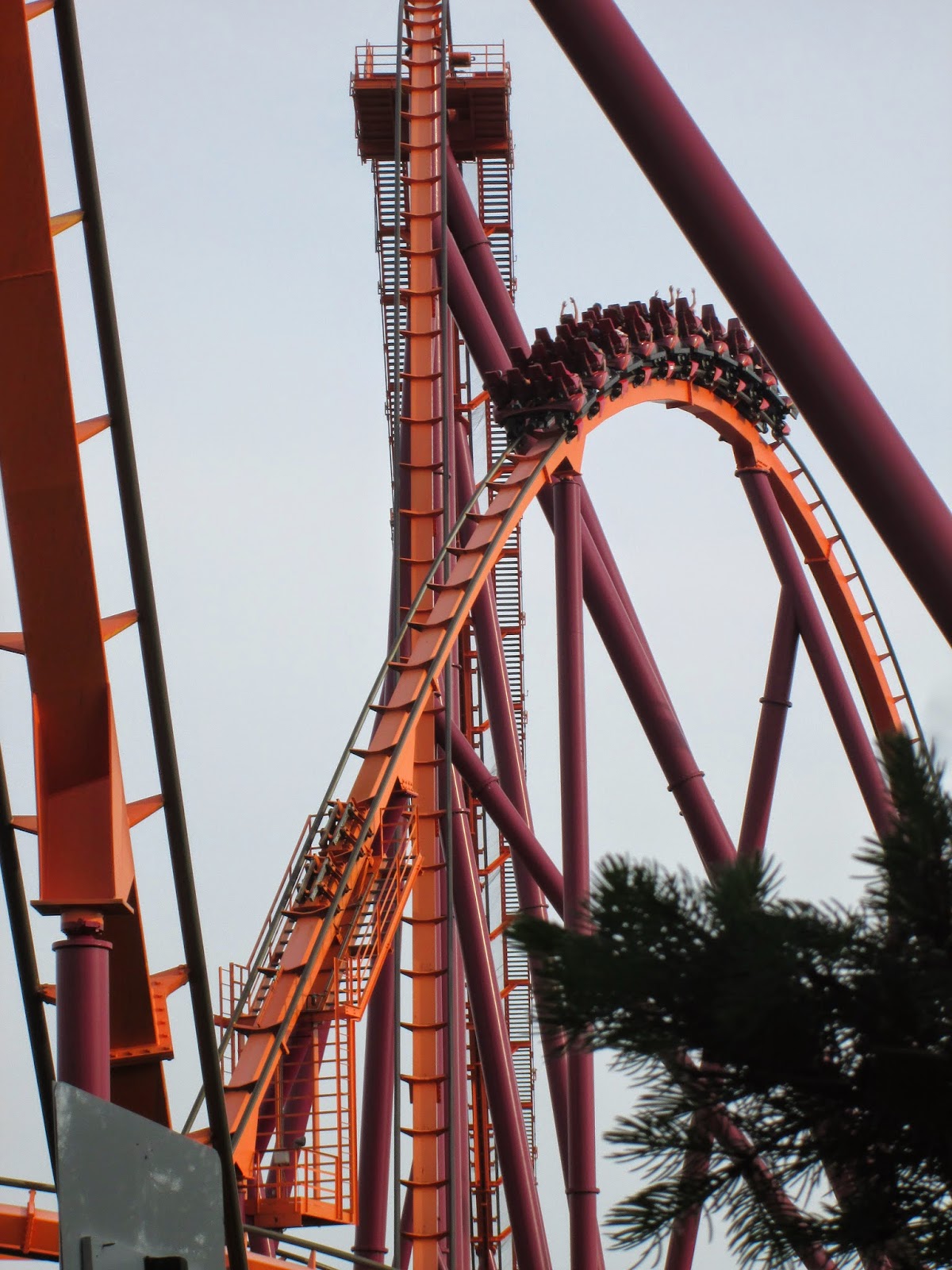 If only those nasty trim brakes weren't there, this hill would've been so much better. I got close to 0 air in the front and back seats....yes. It trims the train that much. 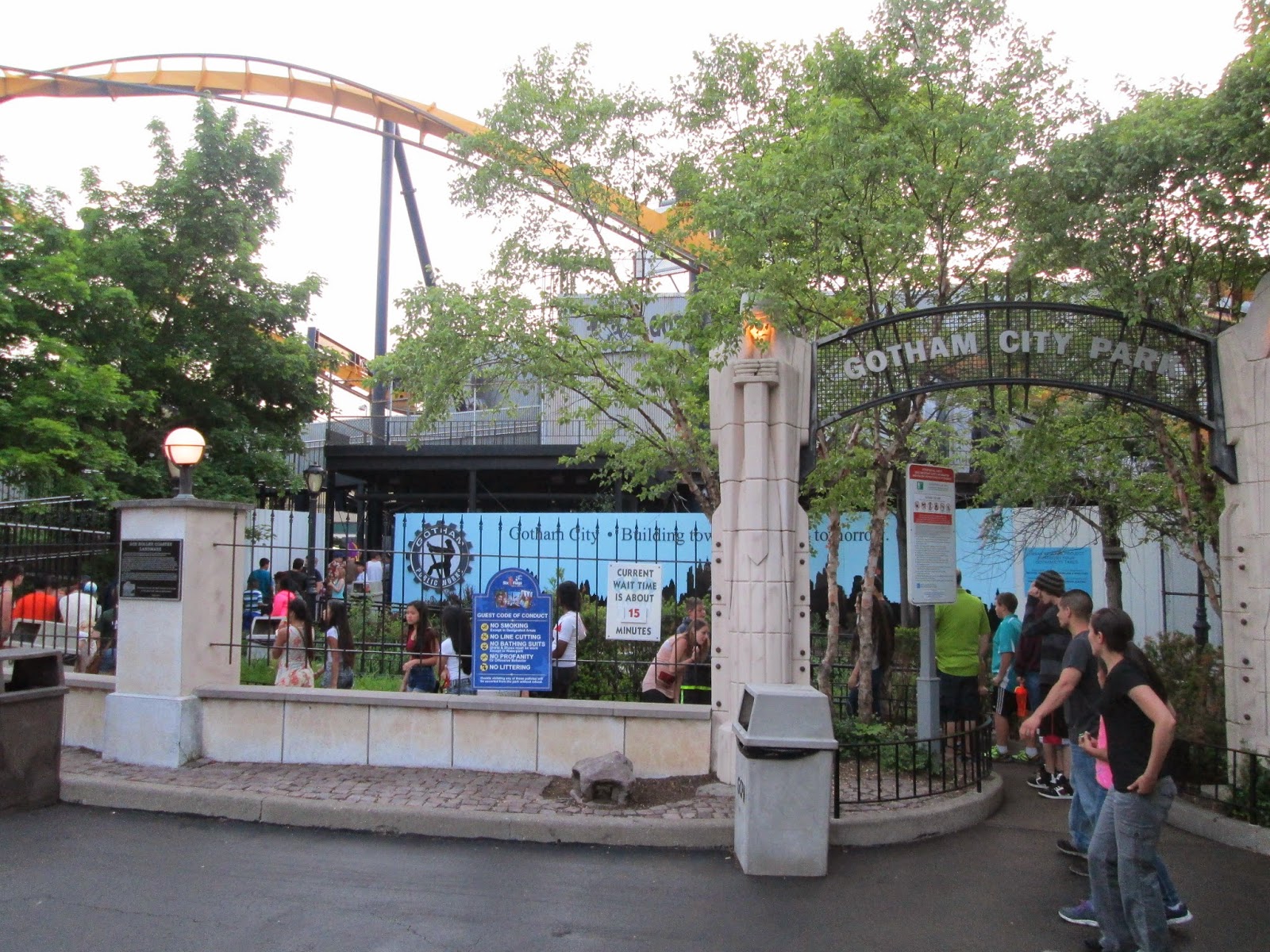 I wasn't going to, but eventually gave into riding my fourth Batman: The Ride clone. Though I am not a big fan of Inverted coasters, this one seemed to ride noticeably faster and smoother than any of the other clones I've ridden (Magic Mountain, Over Texas, Fiesta Texas). Glad that I did! 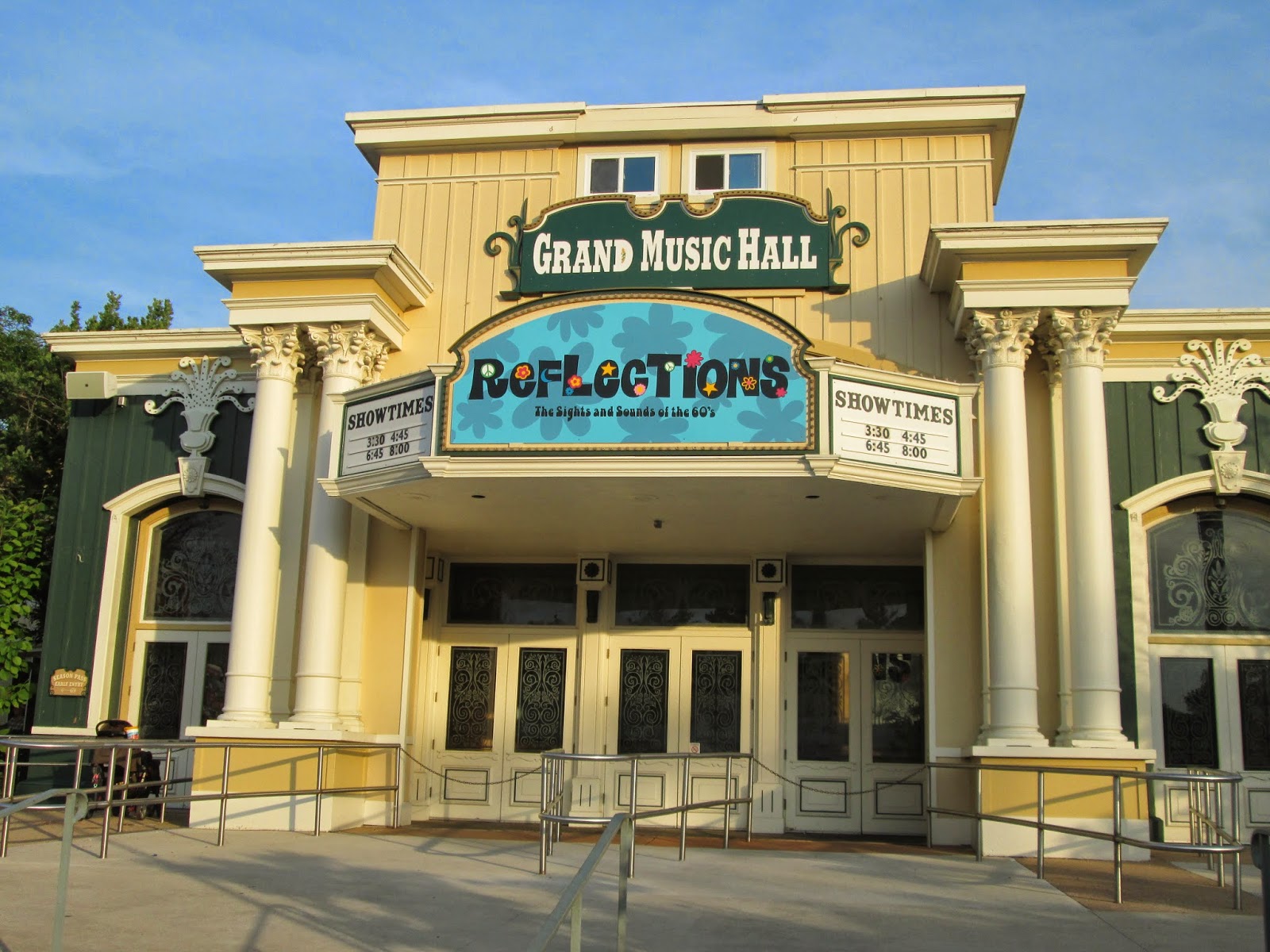 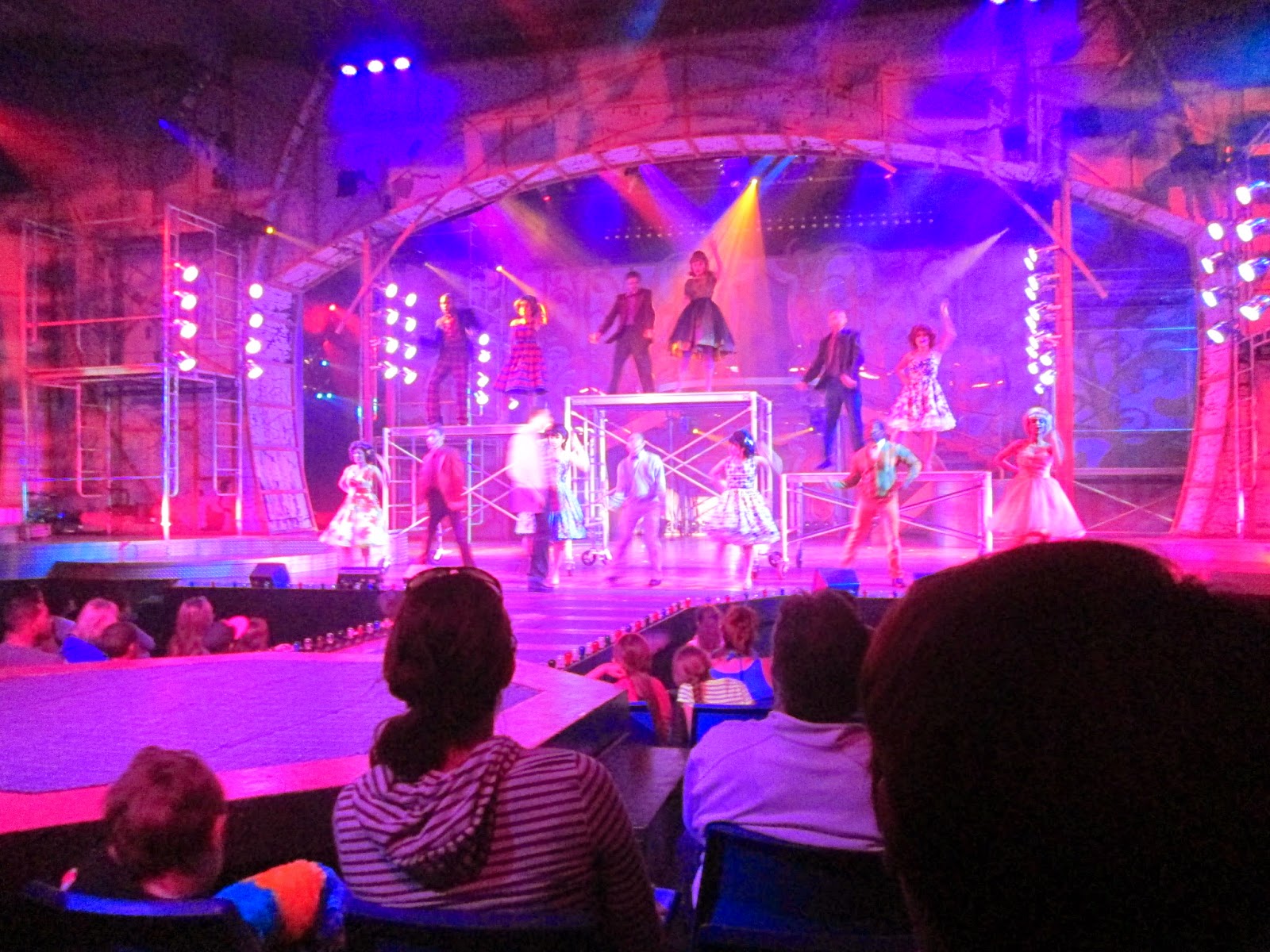 Big mistake. I'm sorry, but this 60's Reflection show was just so bad. Maybe I'm not the right age group, or have been spoiled by Six Flags Fiesta Texas's amazing shows, but the show was close to terrible. The actors had no energy or enthusiasm, the chorus was lip synced that would come off incredibly obvious and distracting, and the sets were all the same and bland. The theater was probably 1/5 full at most, as I got this empty row right as the show started. Six Flags Great America, you've impressed me in almost every other way with the park, so why is your entertainment division so off par with everything else? 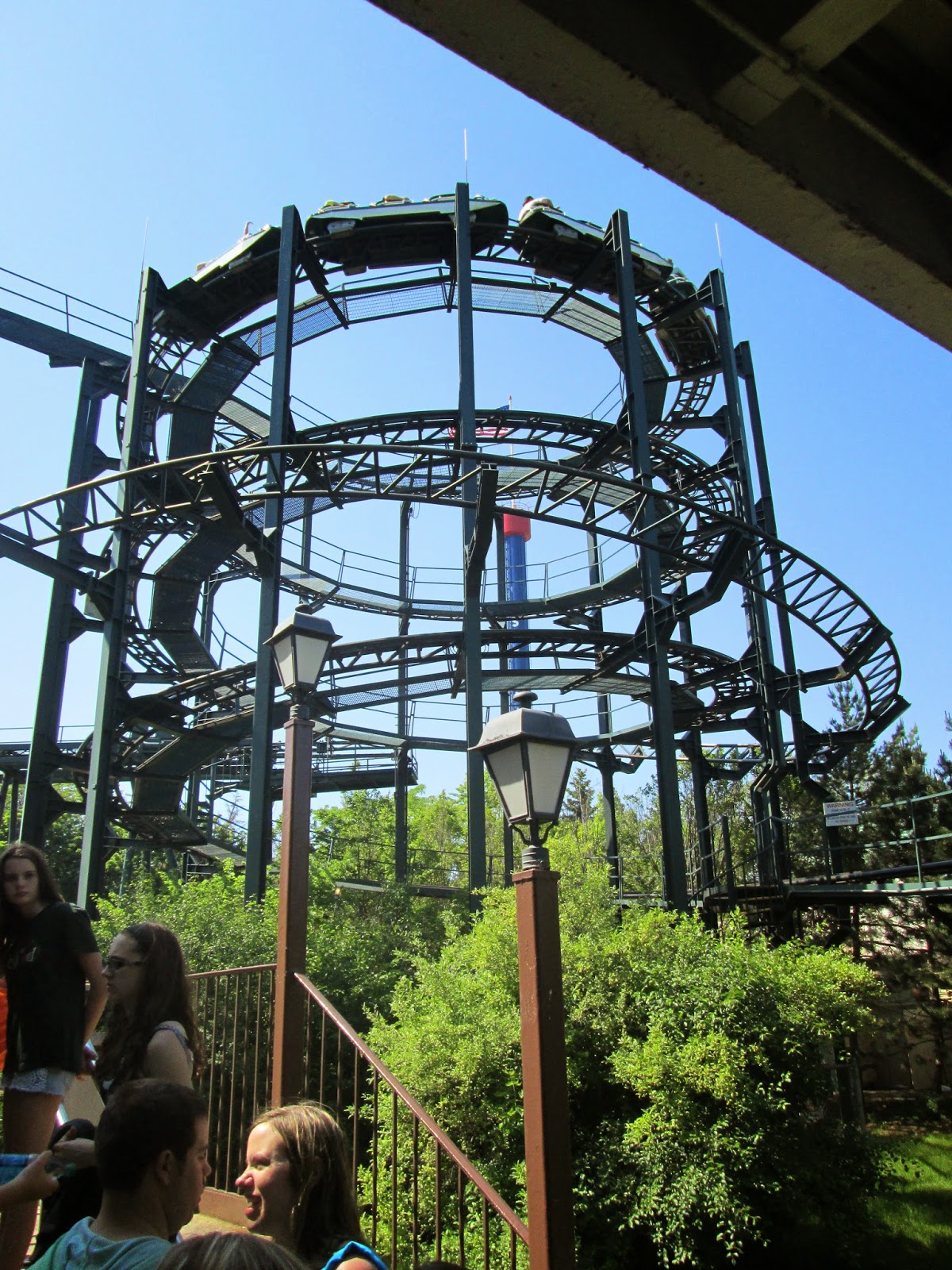 Moving on, the Whizzer! Having California's Great America as my local park, I had to ride it. Minus my non-working seat belt in the train, they've done an amazing job with the maintenance of this ride. Still runs very smooth and is quite enjoyable. Always makes me happy to see a park that invests into the maintenance of their rides. 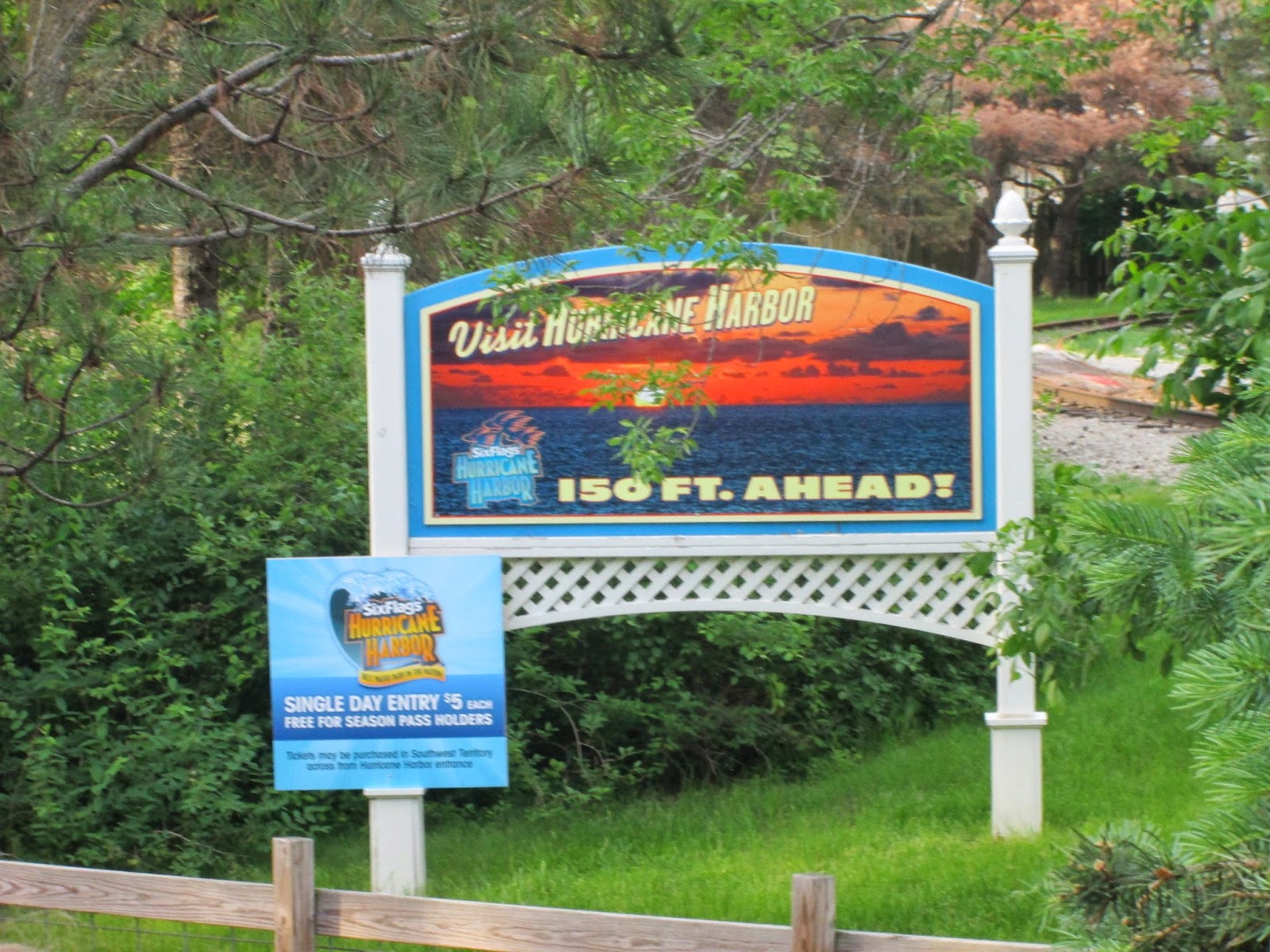 The Hurricane Harbor water park was pretty darn good as well! It was in the low 70's today, yet the park was absolutely empty! Nearly everything was a walk on! The only blunder was paying $13 to rent a small locker for 2 hours. Definitely worth a visit though, a lot of fun! 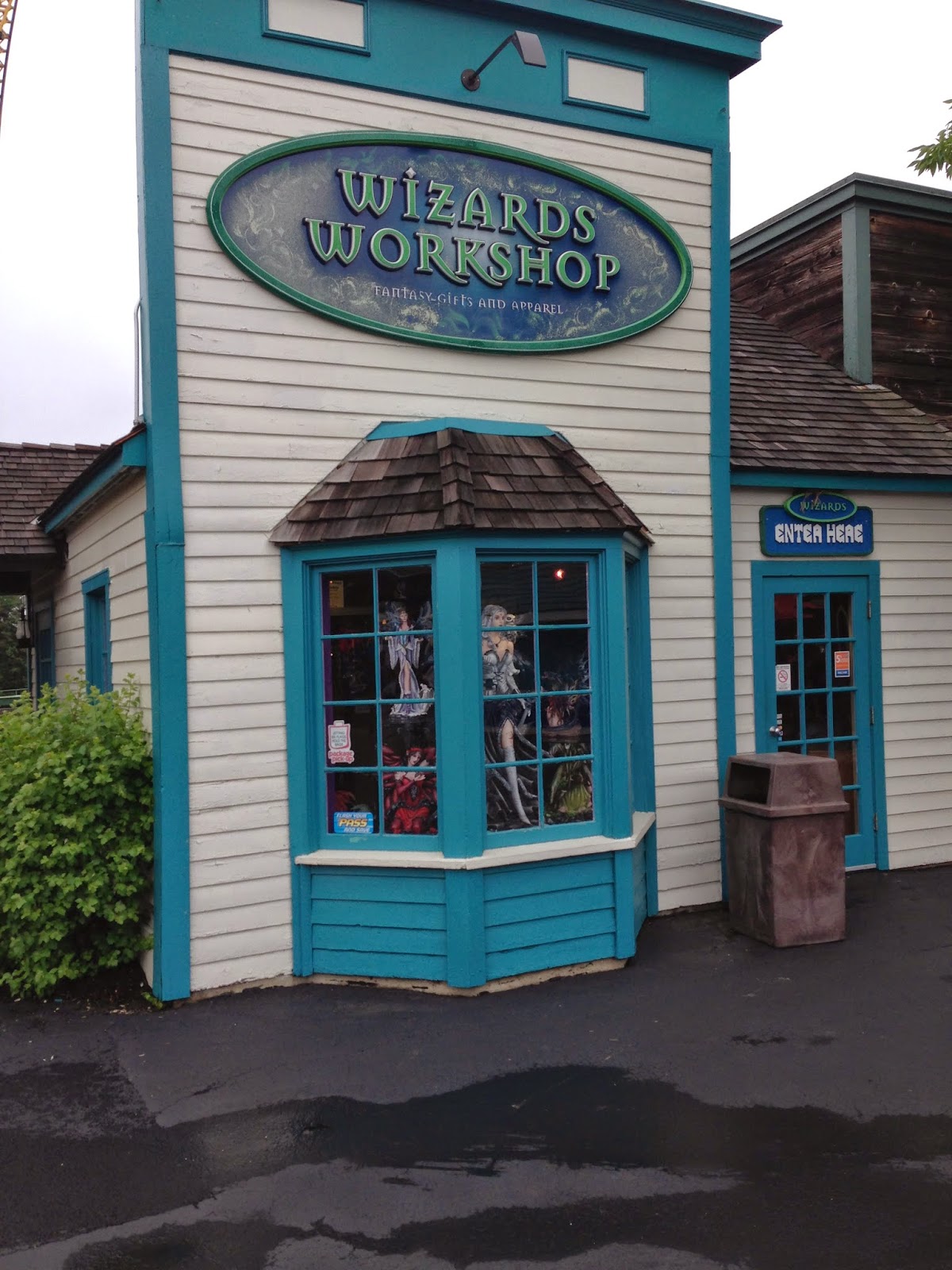 This caught my eye because it;s such a unique store for a Six Flags. It's not up my alley, but still really neat to see some fresh merchandise in a Six Flags. 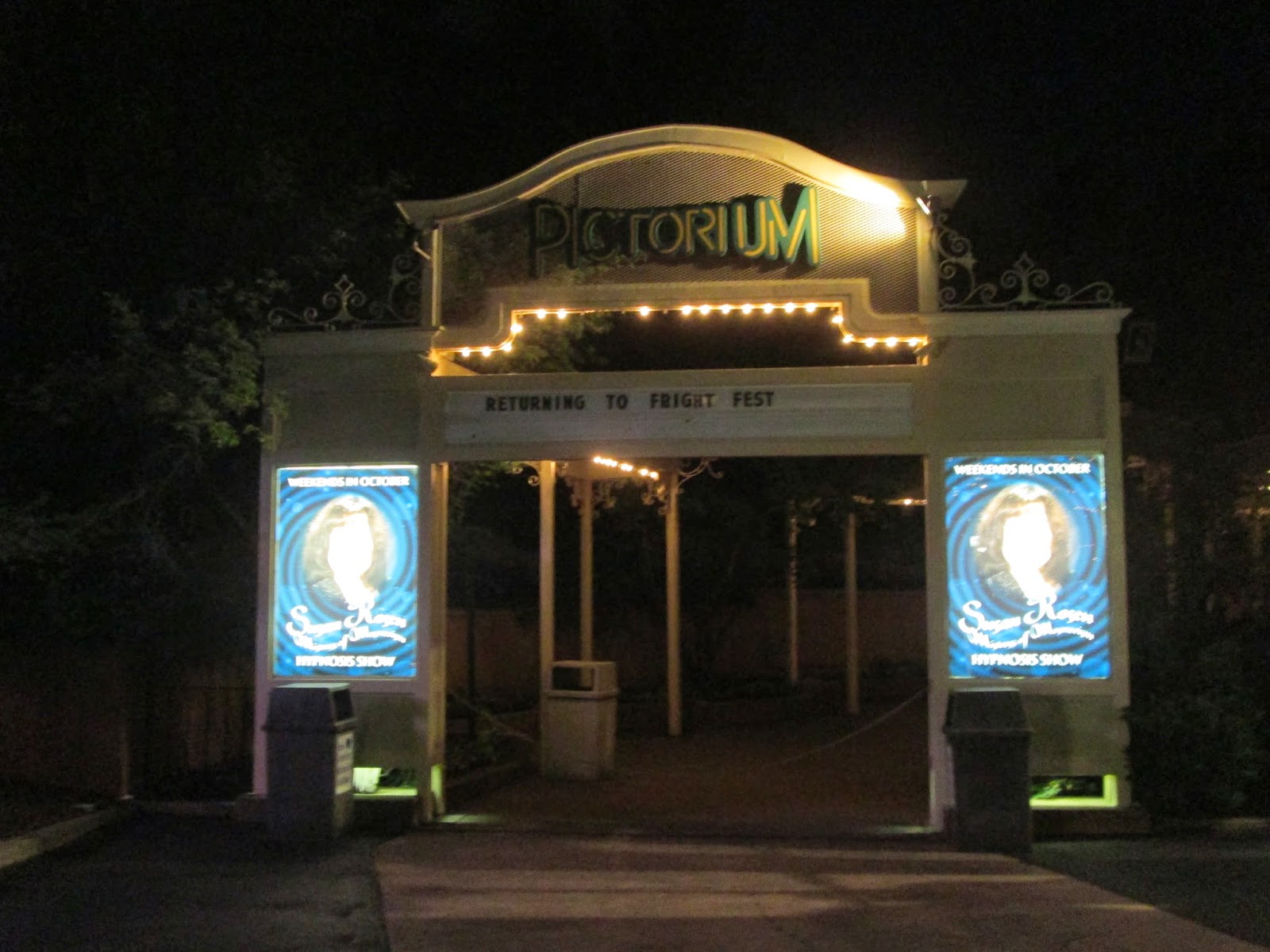 The Pictorium will be closed until Fright Fest until the Hypnosis lady returns. From what I overheard from park guests in the area, the lady does a good job at the show. So, make sure to check it out in October! 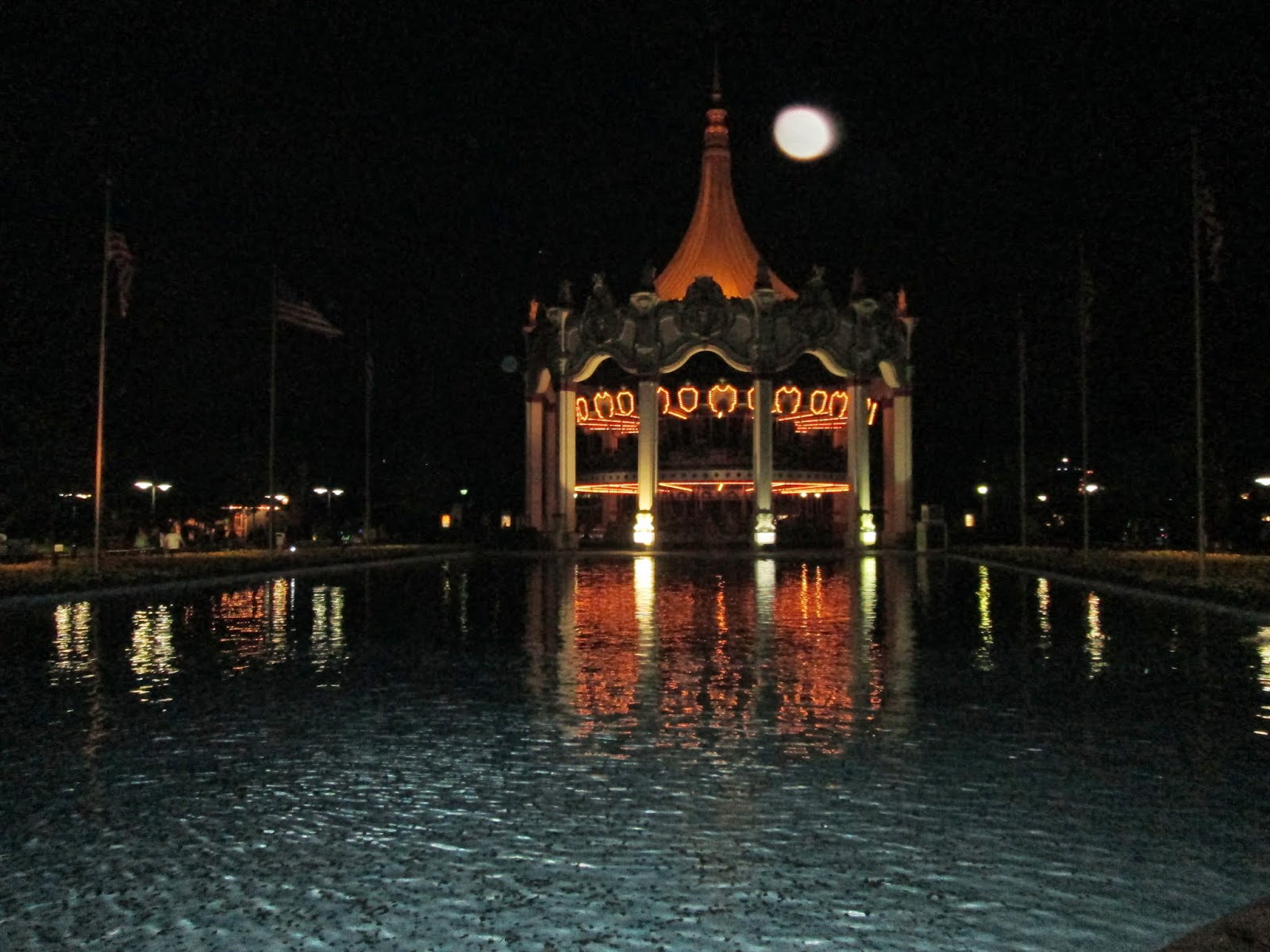 To seal my great first-visit to the park, goodnight Six Flags Great America! 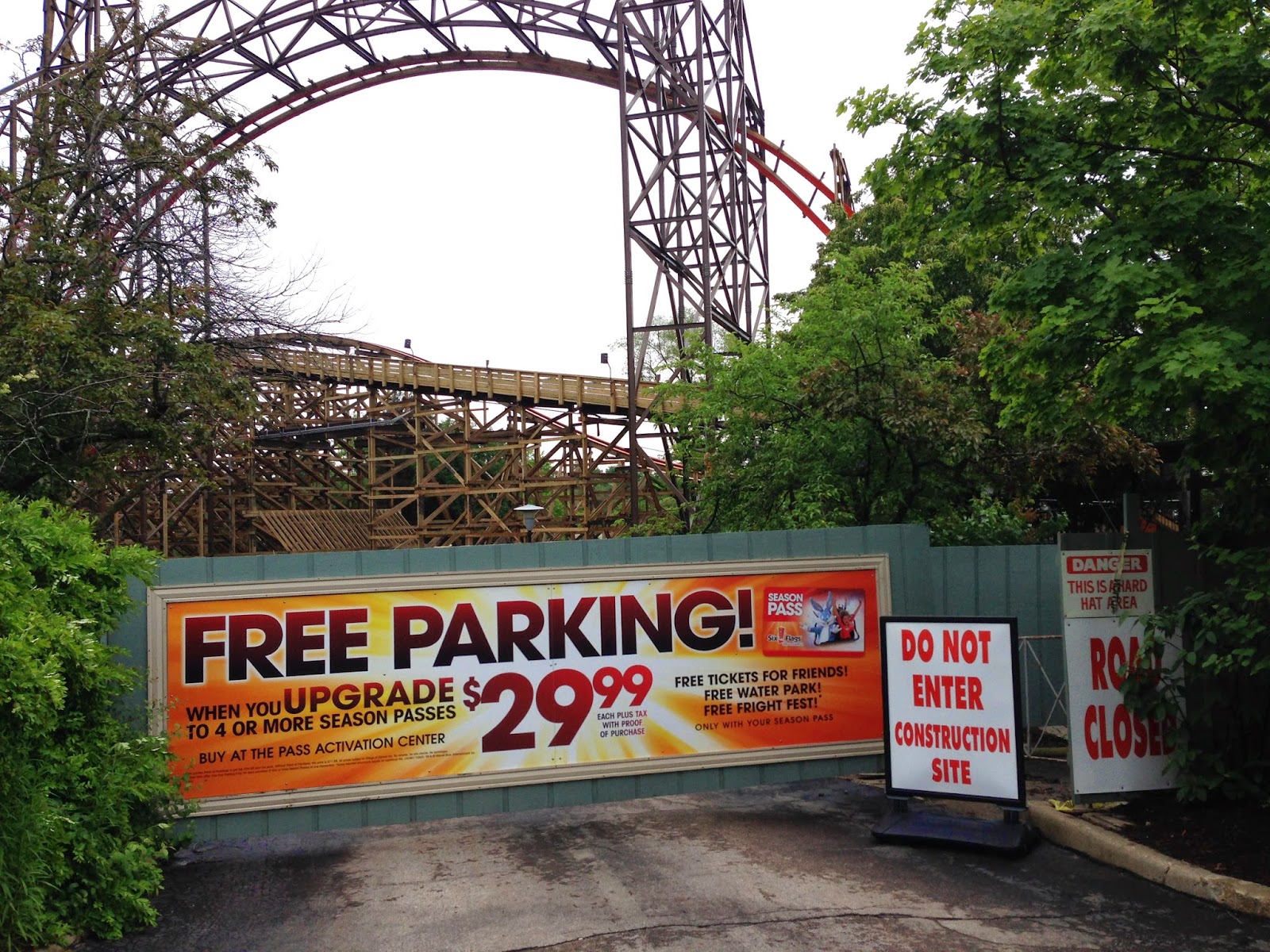 Theme Park Overload got to go Behind the Construction Walls of the brand new Goliath wooden coaster for a tour of the active site! Photos, Video, and our exclusive interview with Park Spokesperson Katy Enrique can be found in our separate dedicated article from our Goliath Construction Site Tour!
Location: Six Flags Great America, 1 Great America Parkway, Gurnee, IL 60031, USA