June 24, 2014
It's time for our third and final update from Theme Park Overload's Summer 2014 Chicago trip! For our final stop, we headed 3 hours up the I-94 out of Illinois and up into Wisconsin.

After passing through Milwaukee and Madison, we arrived at the Wisconsin Dells. Think of it as the Las Vegas of the Mid-West, as driving down the Wisconsin Dells Parkway strip welcomes you to all the local tourist attractions. But the crown jewel of them all is the Mt. Olympus Theme Park Resort, with water parks and theme parks located both indoors and out. Our trip focused on just the theme parks, and especially the newly renovated Hades 360 wooden coaster! Now it's time for me to stop talking and you to start scrolling! 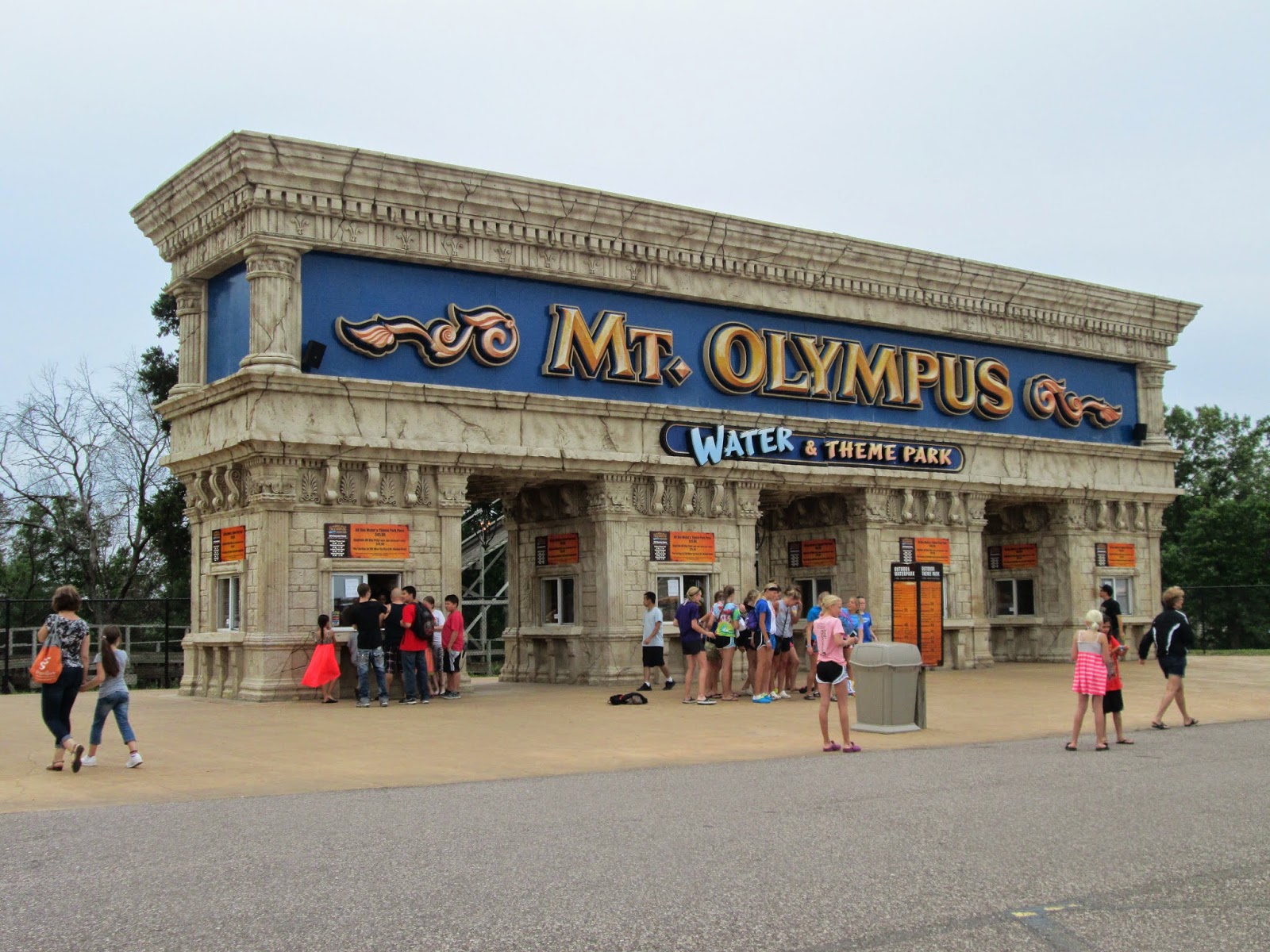 The entrance to the park was really cool; sets a good vibe for the "Greek God" theming. 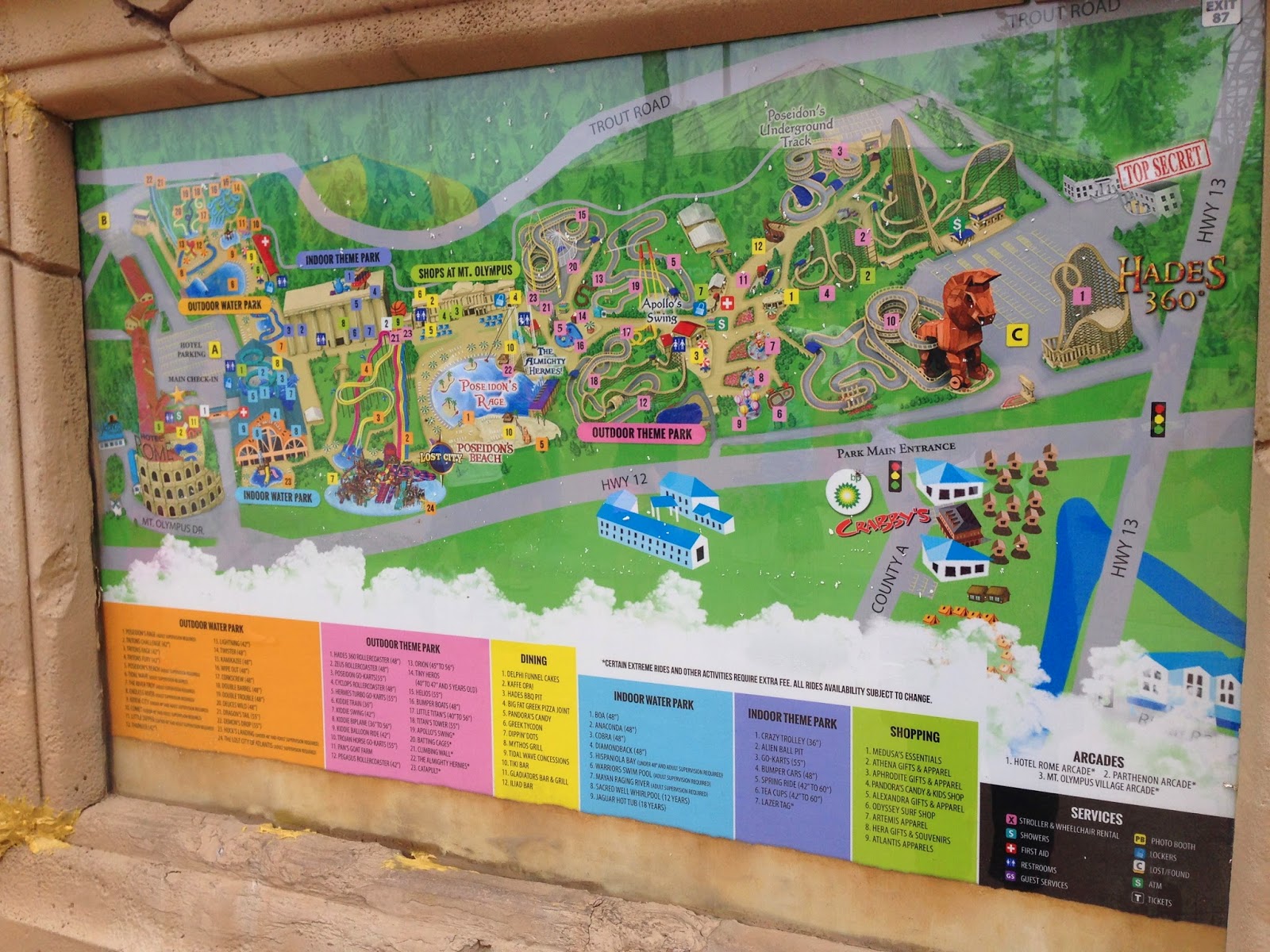 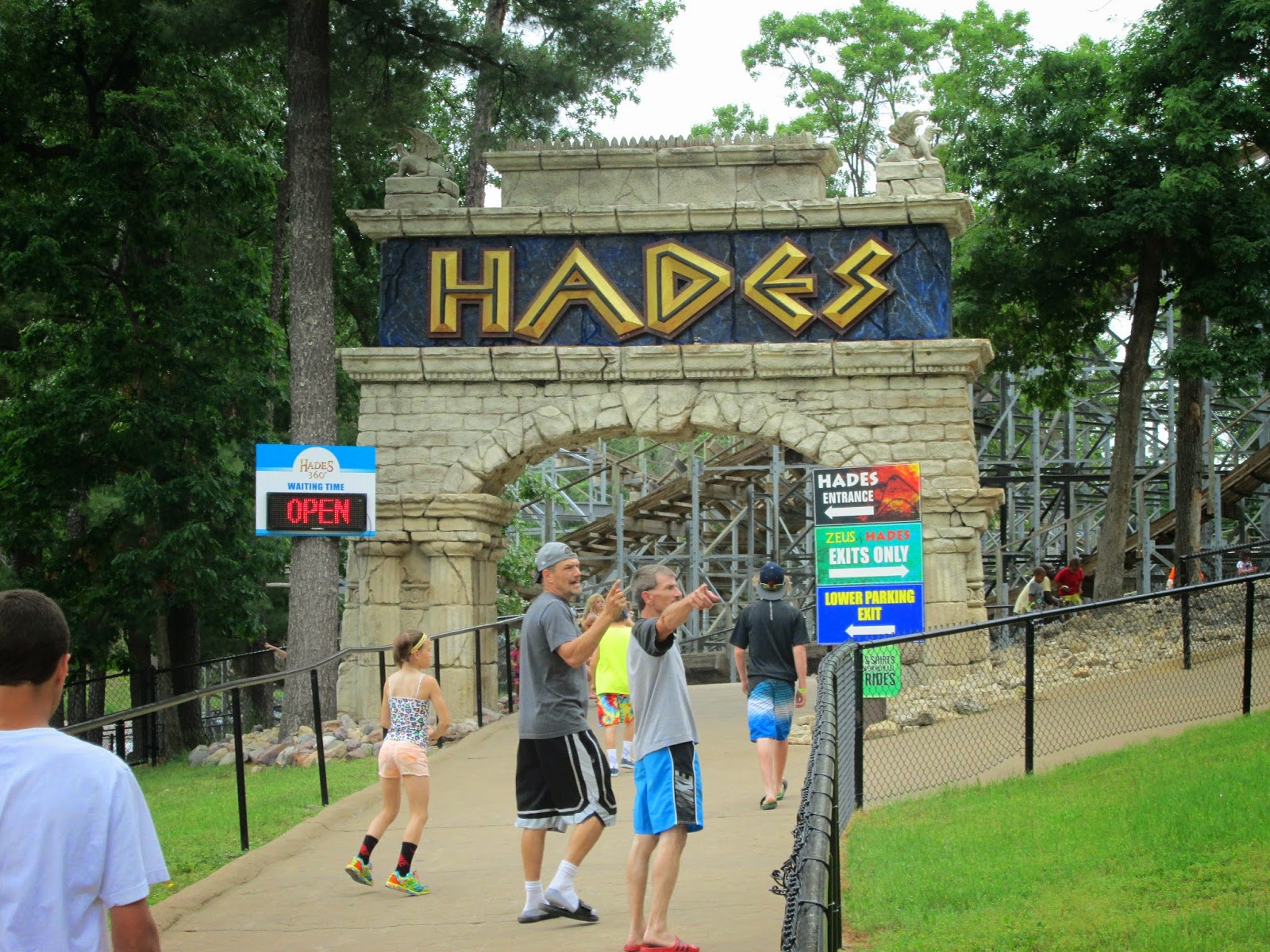 The park's 4 wooden coasters kinda mush all together in the park, which is really neat! It makes it hard to tell any track pieces or segments apart, except for Hades 360's first drop. 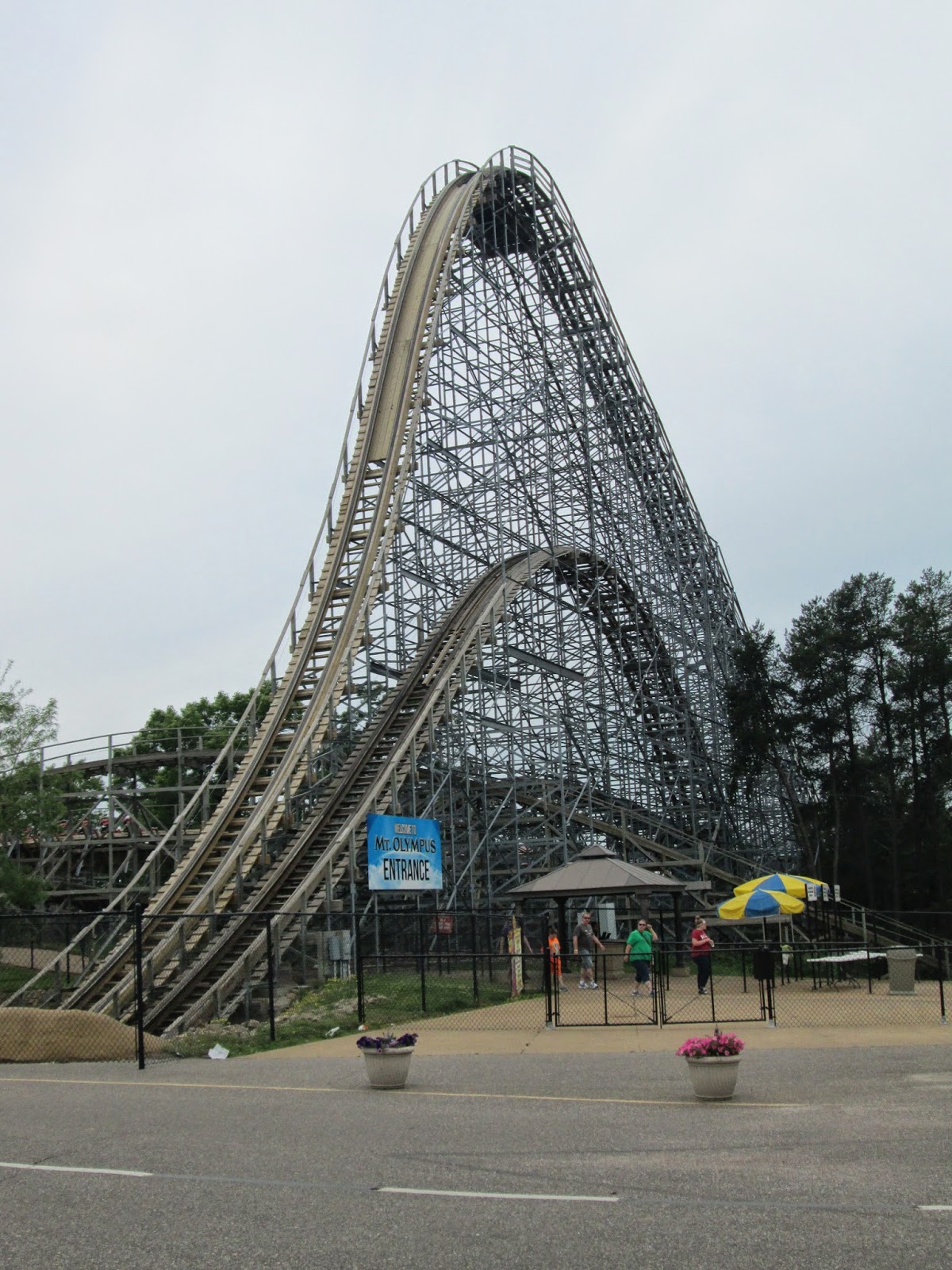 Can you say STEEP! Now for a little history on Hades 360. Originally opening in 2005, Hades was a crazy wooden creation from the Gravity Group coaster manufacturer that came with many wooden coaster firsts. Notably, a very steep drop and the world's longest underground tunnel on a wooden coaster (The tunnel runs under the parking lot, as you can see in the photo above). In the fall of 2012, the Gravity Group and Mt. Olympus partnered together again to upgrade Hades. They removed the hill and drop turn around from the isolated part of the ride in the parking lot. (You travel down the first drop seen above, go into a tunnel, come up across the parking lot into the hill and drop turn around I'm describing above, then back underground, and back to the main structure to the smaller hill also pictured above). They instead added a 360 degree full inversion and 110 degree banked turnaround element and purchased a new Timberliner train to run on the ride. It reopened in May of 2013 as the newly renamed Hades 360. 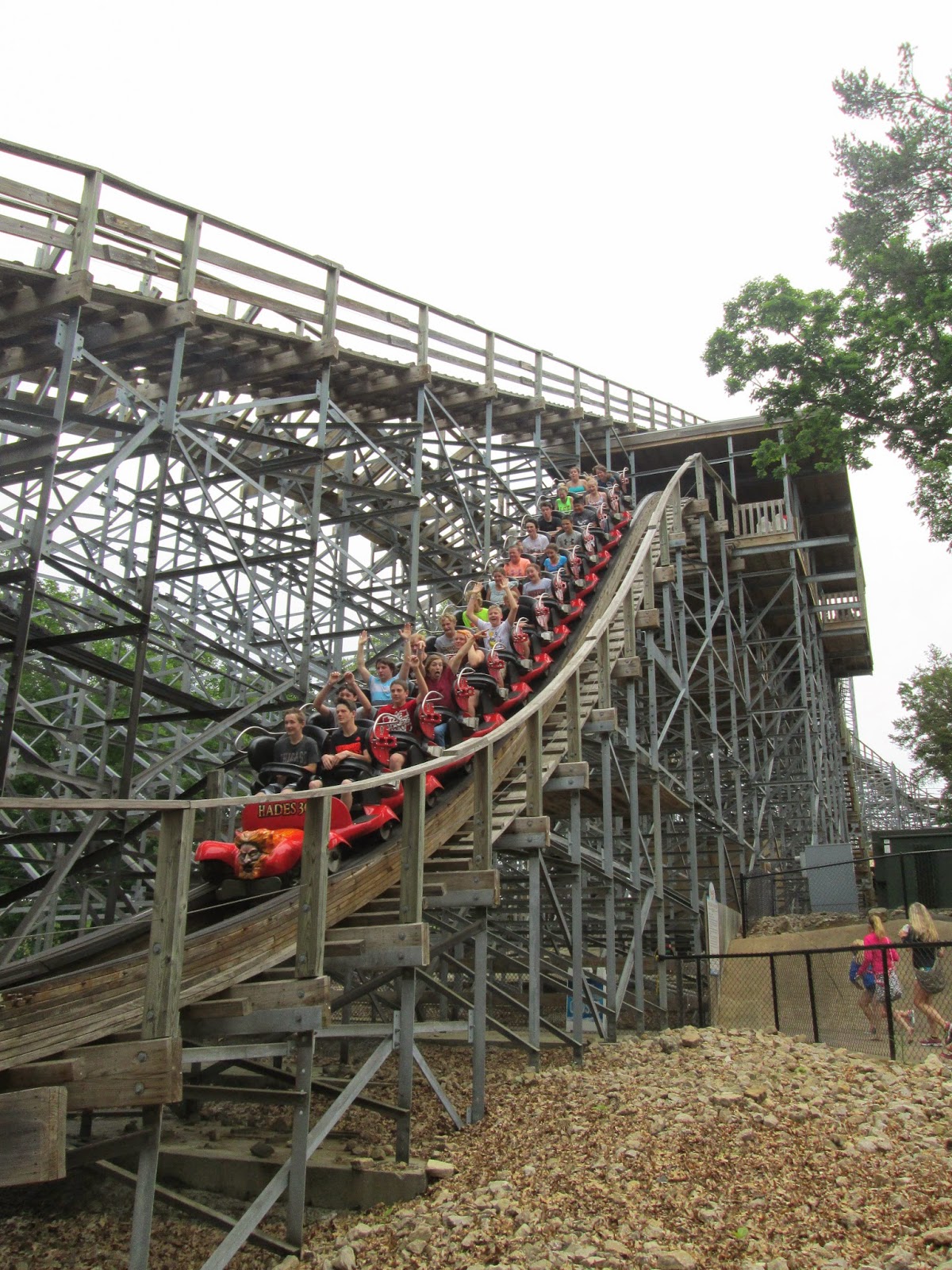 It drops right into the action immediately after train dispatch. Speaking of dispatch, Mt. Olympus has one of the worst operations department of any amusement park I've ever visited. All 4 wooden coasters only have 1 train, and the stations are understaffed making for even slower dispatch times. I'm lucky I didn't visit on a very busy day, but about 300 people in front of me for Hades 360 still gave me an hour wait! Shame too, because their wooden coasters are pretty good! If only they could get the operations and management side down... 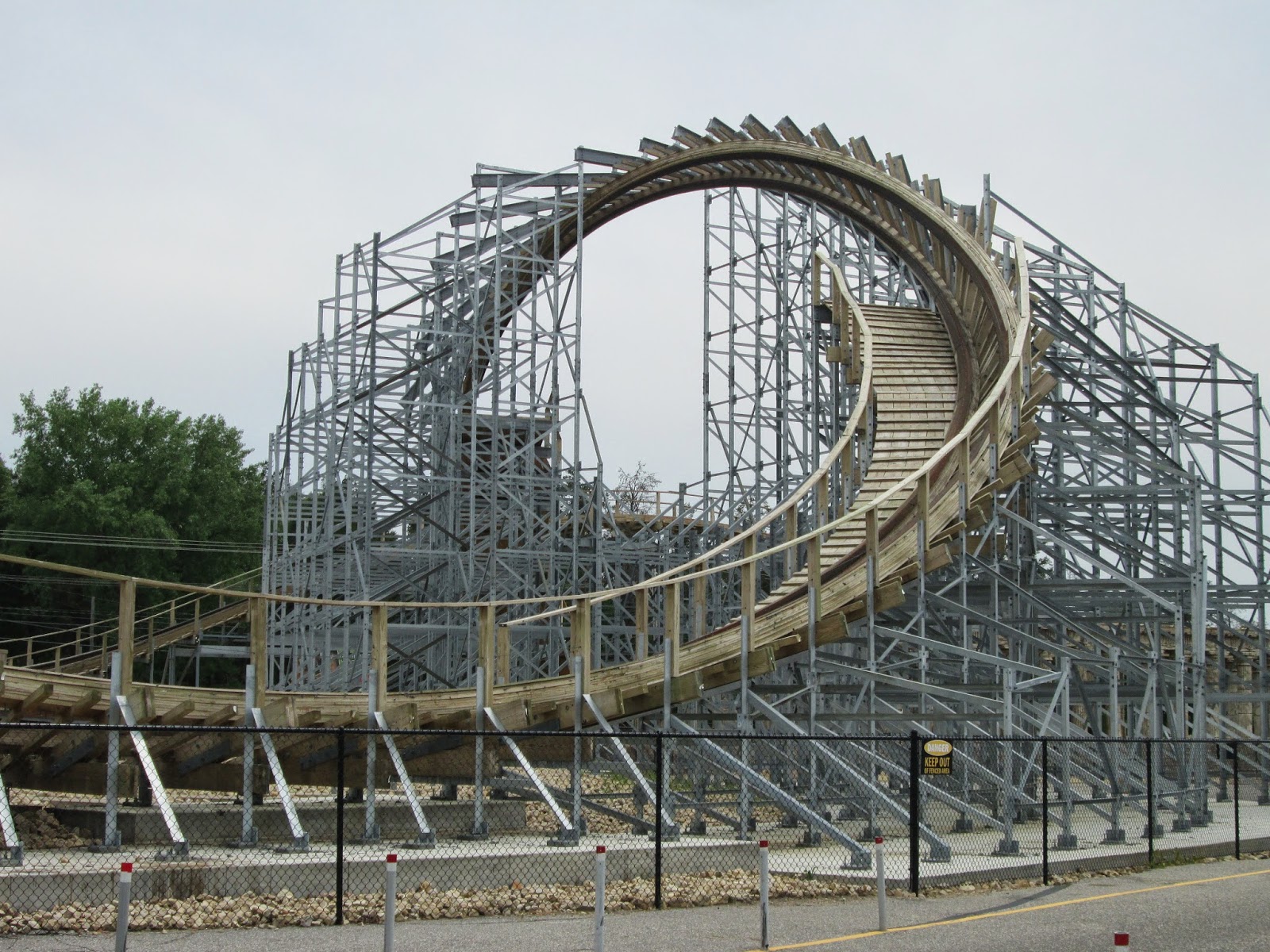 The answer is..... Yes, that corkscrew is just as crazy as you'd think it is. You go down the first drop, are surrounded by a PITCH BLACK tunnel for a solid 5 seconds, and then thrown into this crazy contraption. Total ride quality wise, Hades (And the other coasters in the park) are a little rougher than the norm wooden coaster, but I still found them very fun and worth riding! 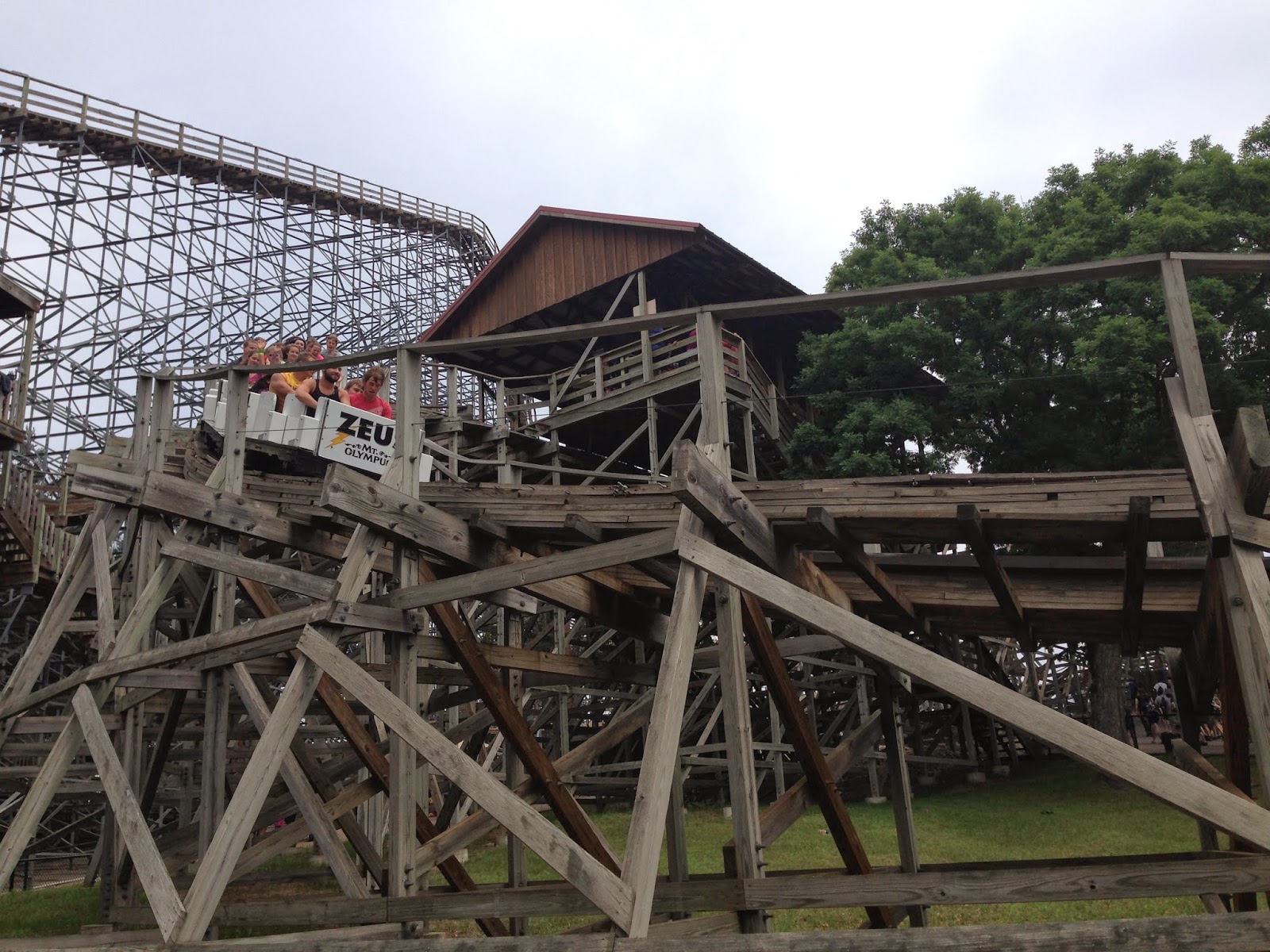 Zeus is the next largest coaster in the park, with a decent 85 foot drop. It's good in the back for air, and better in the front for smoothness. 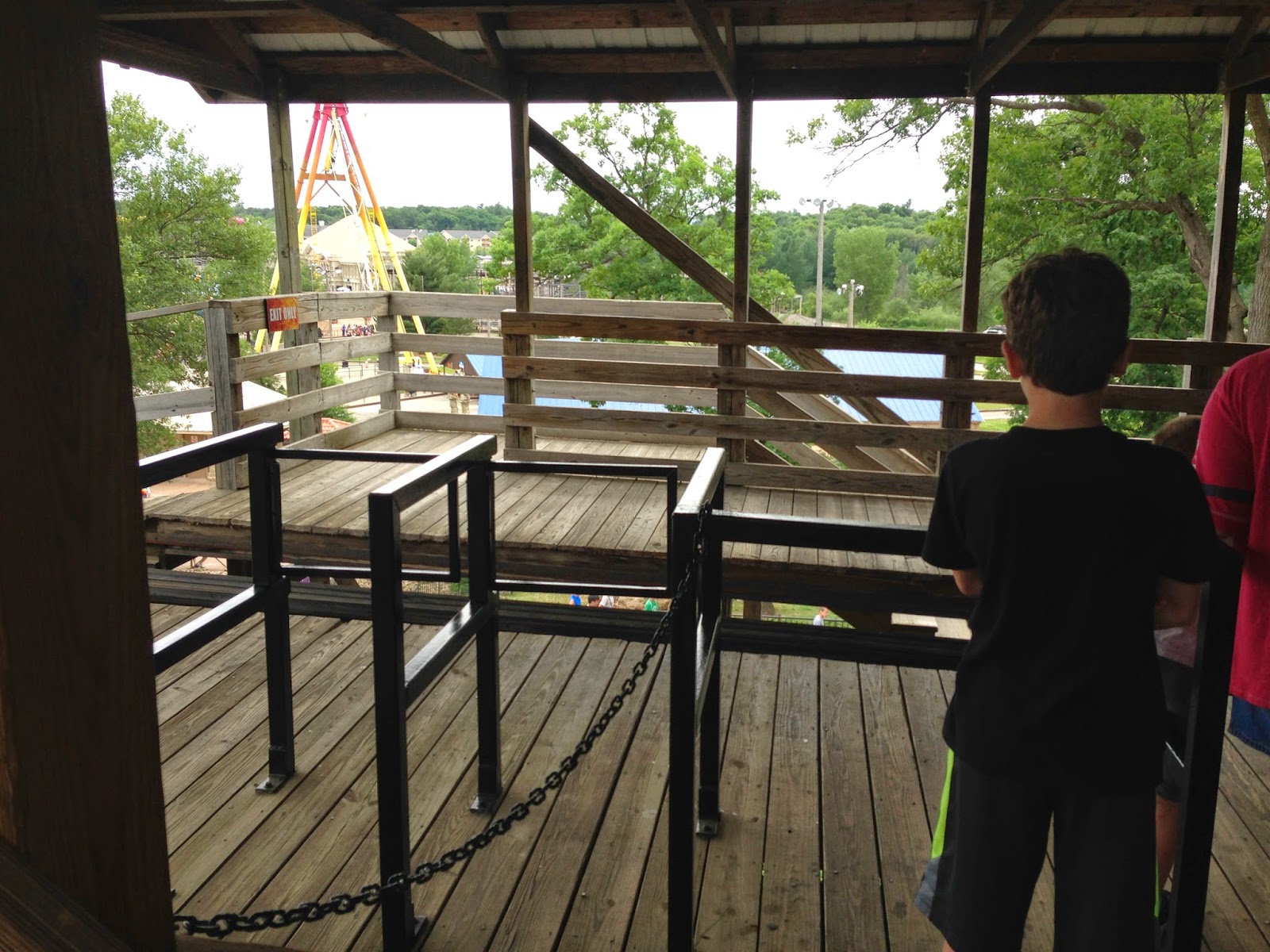 BUT WHY! The coveted back row of the Cyclops wooden coaster (Restricted to 18+ riders only due to extreme airtime) is no more. Well, technically I still sat in the "back"...Cyclops is a slightly smaller version of Zeus. Through good, I found Zeus having more air than Cyclops. 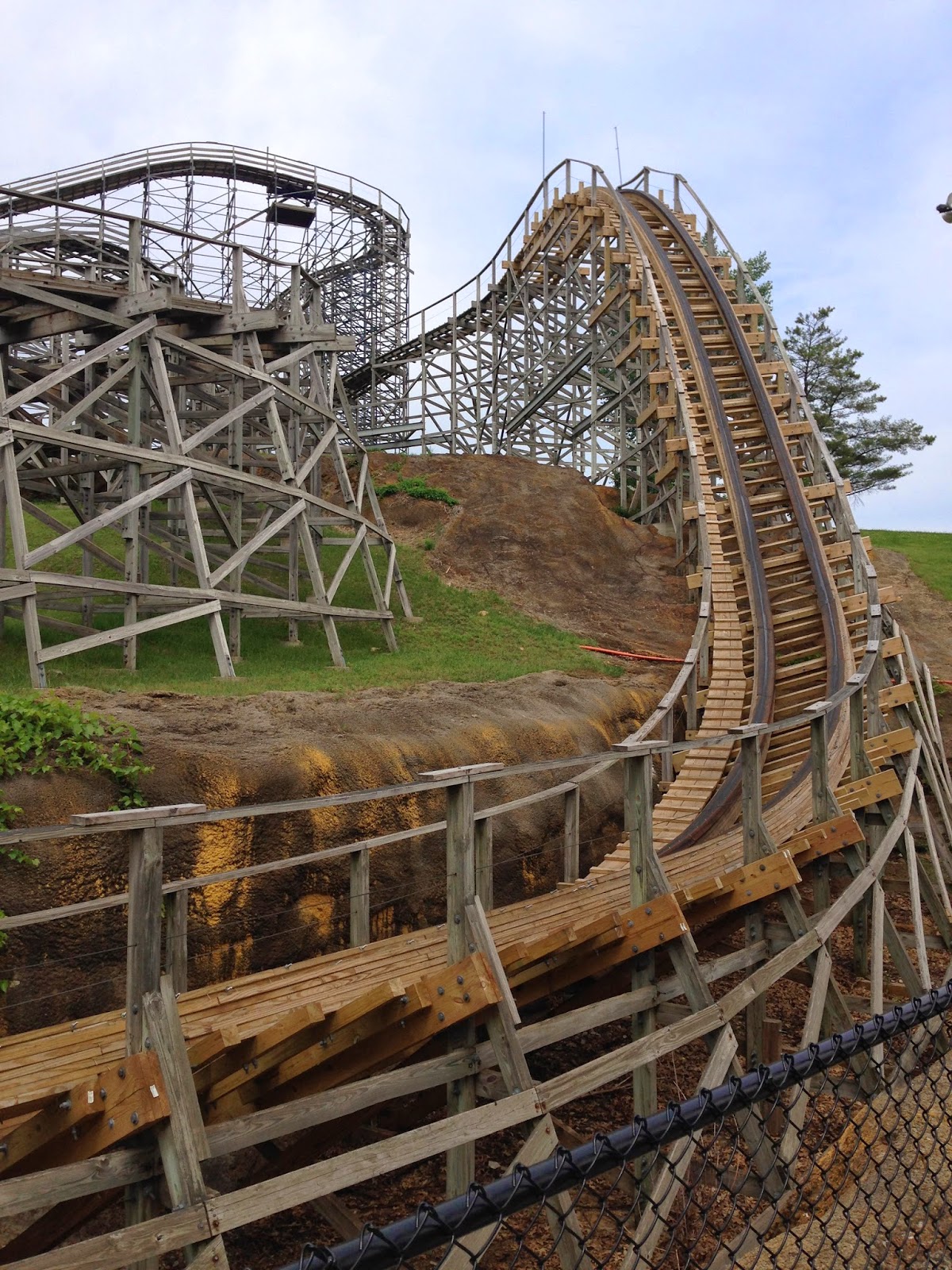 This is known as the signature drop for Cyclops, that supposedly would fling the back car riders out of their seat. I still got some decent air on it, and all the fresh wood they put on the ride here made it decently smooth! 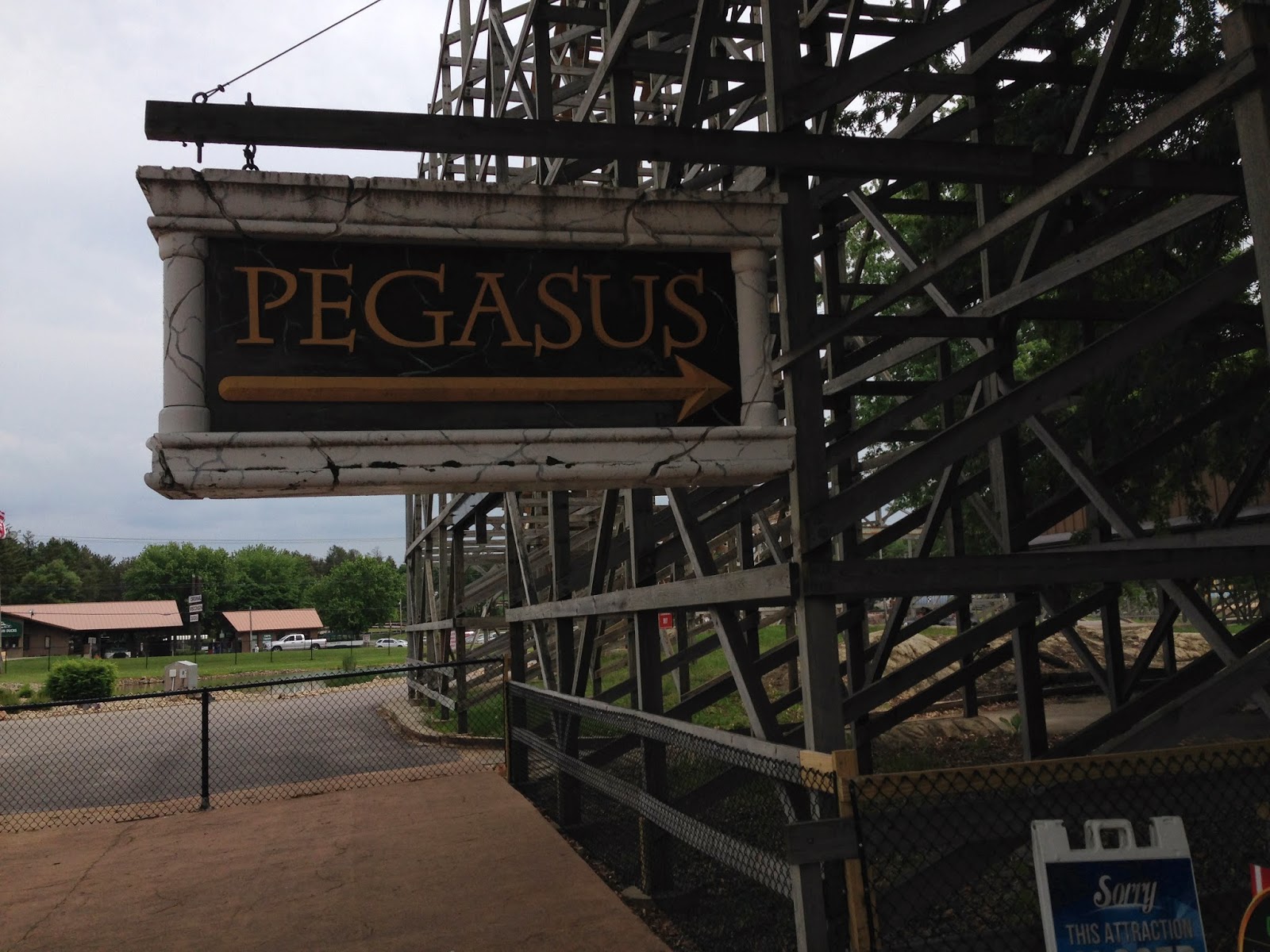 Pegasus is like an even smaller version of Cyclops. Think a small step up from Little Dipper at Six Flags Great America. Small drops, decently smooth ride, and a good fit for the younger coaster riders. 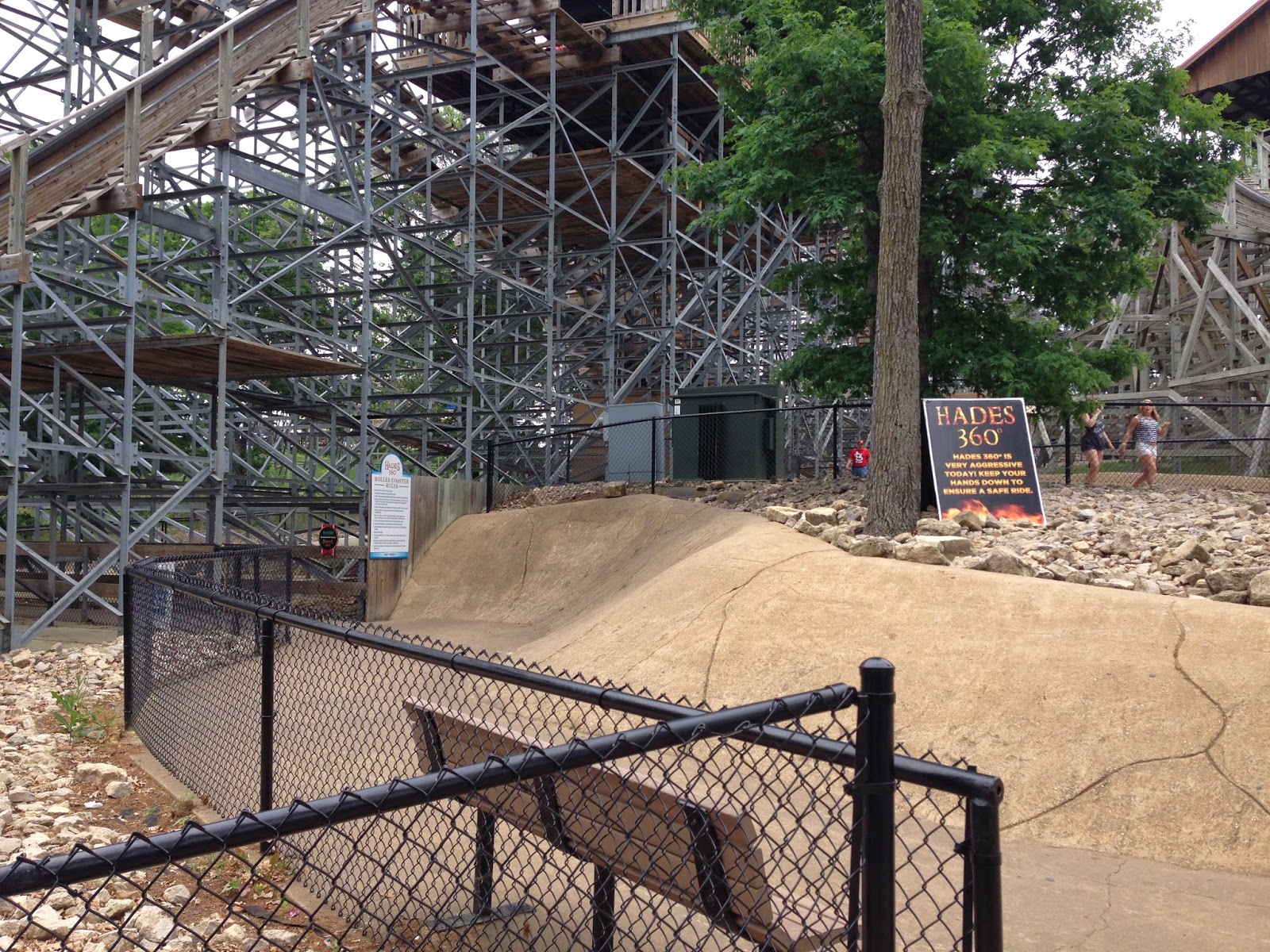 They don't call this park "Mt. Olympus" for nothing! It has some pretty decent hills....the one hill up to Zeus reminds me exactly of Six Flags Magic Mountain's "World Famous" Superman Hill, steep! 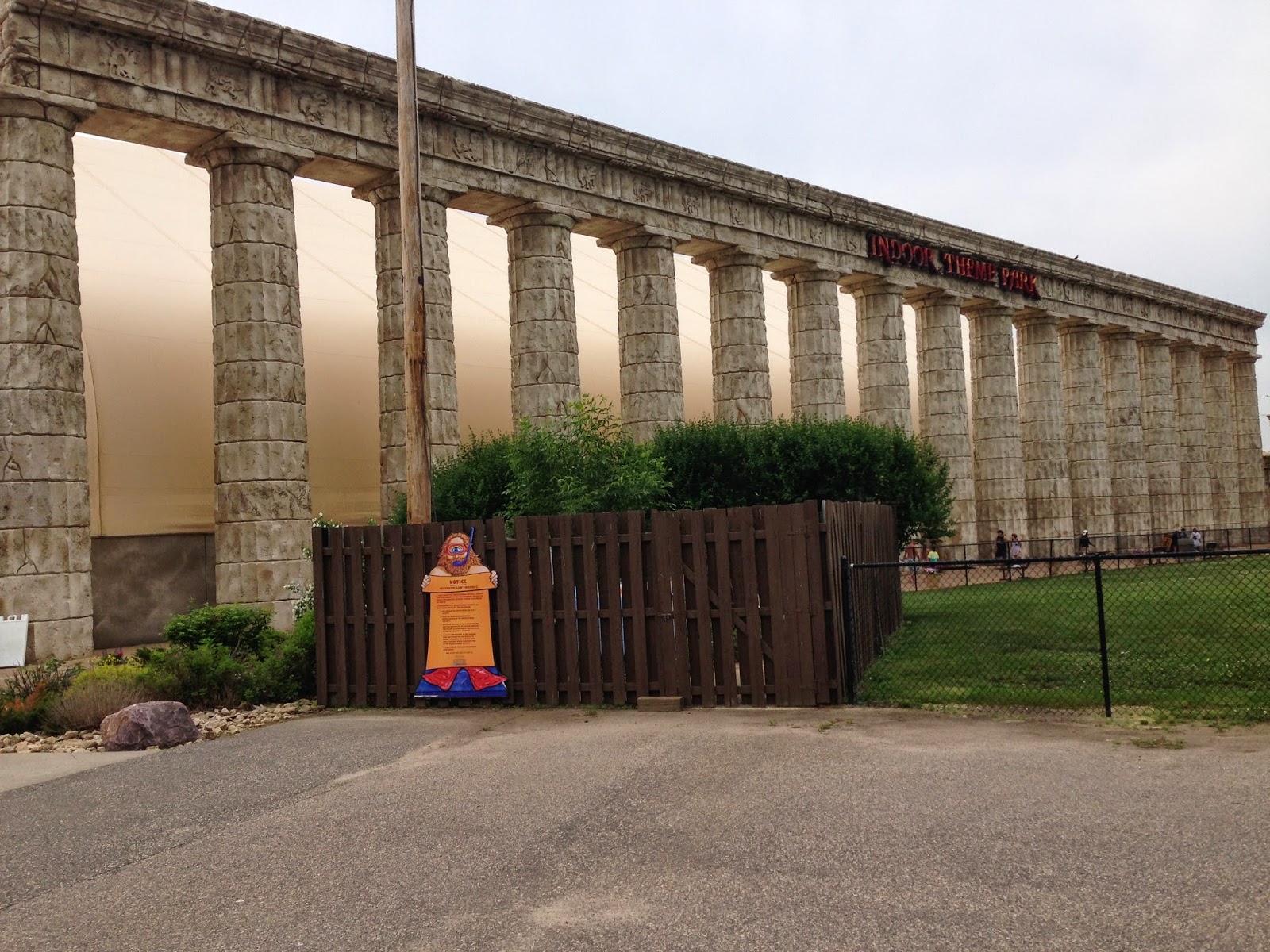 A little over in the resort, I decided to check out the indoor theme park. 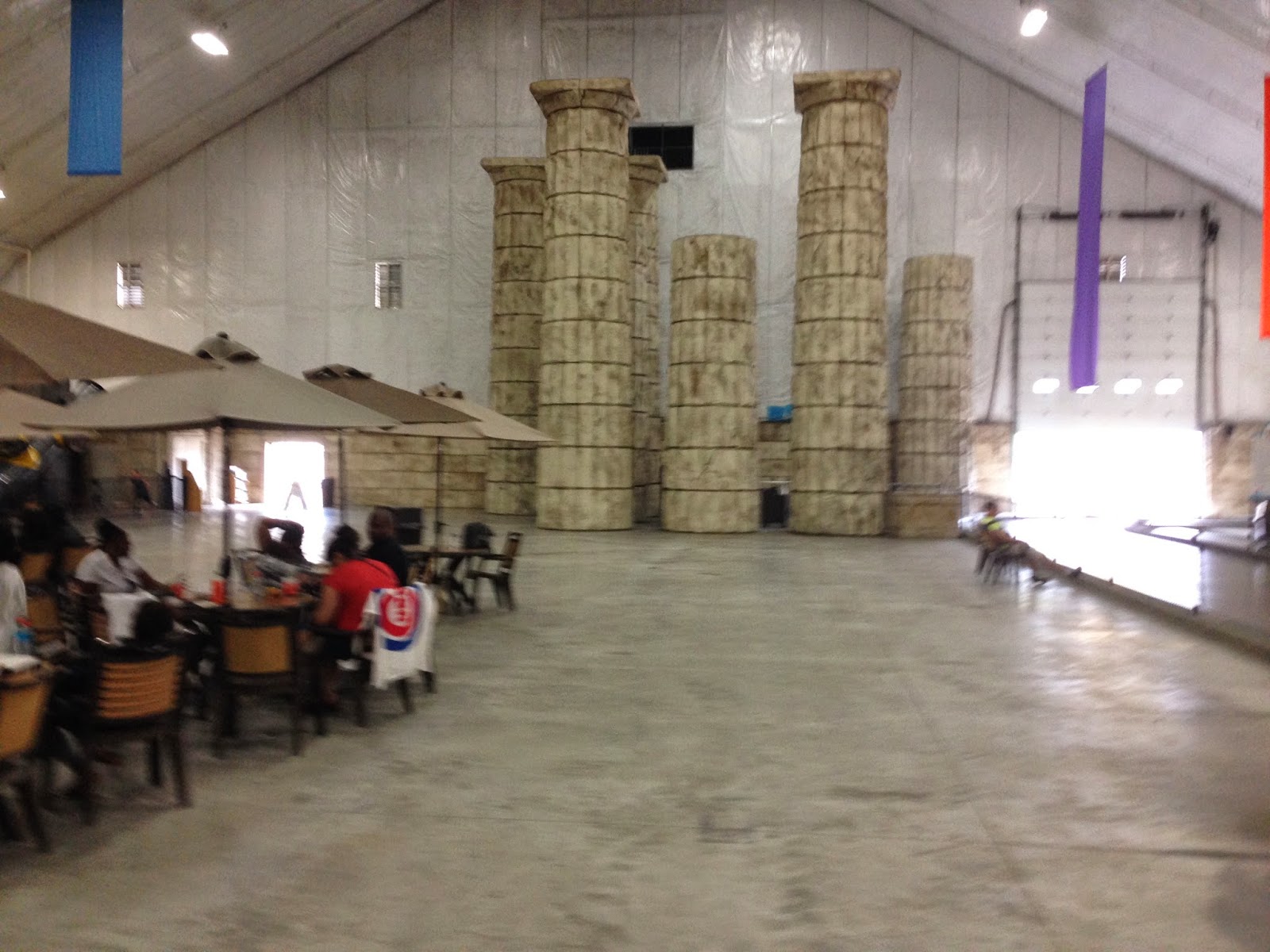 This very obvious empty spot in the middle of the "park" was where the Opa spinning coaster recently stood, until an older man fell and fell into a coma due to the ride's faulty lap bar in March of this year. The coaster is no where in sight, and believed to have been sold and permanently removed.

The indoor theme park was very small and uneventful. It's definitely a nice retreat for the younger bunch, with it's small amusement kiddie rides and arcade, but not anything compared to the outdoor theme park.

That sums up our visit to Mt. Olympus Theme Park Resort, and our entire Theme Park Overload Chicago trip! Thanks to the owner Nick and manager Adam for setting TPO up for the visit.

Scroll below to read up from the rest of our Summer 2014 Chicago trip, including an exclusive Construction Site Tour and Interview from the new Goliath wooden coaster at Six Flags Great America and our general Photo Trip Report from Six Flags Great America! My name's Nicholous, and Thanks for Reading!
Location: Mt Olympus Theme Park & Water Park, 1701 Wisconsin Dells Parkway, Wisconsin Dells, WI 53965, USA