June 22, 2013
Full Throttle has officially opened at Six Flags Magic Mountain! With 3 launches, one of them being  backwards, this new rocket coaster is sure to send riders screaming through the inside and outside of the 160 foot loop structure! We've got full coverage of the Media Event and Grand Opening, starting with an HD On Ride POV and HD Video from the Grand Opening Ceremony below! 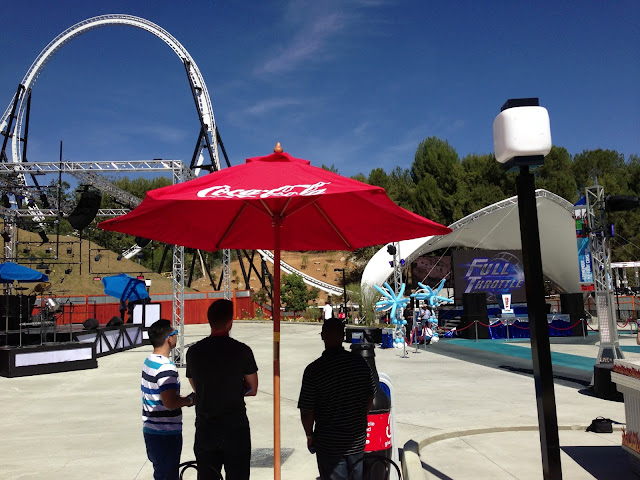 Once you enter Six Flags Magic Mountain, it's obvious that big things have happened. A very unique looking 16 stories tall loop structure can be seen looming in the distance, all the way from the freeway. From the front gate, it becomes more obvious of what's ahead, as the giant loop towers over everything in the near distance. After a right turn from the park entrance, this becomes your view: The new 5 Acre themed Full Throttle Area. 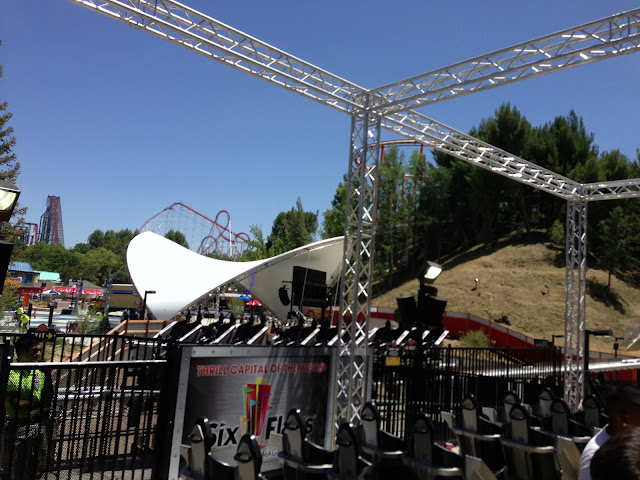 After passing under the white cabana, and through one long two-lane line that acts as the queue, you reach this spot in the station. One thing you immediately notice is that their's no cover over the station, just a concert-styled metal frame. The cover, unfortunately, will not be installed until September. How they got away with this, I'm not aware. Note how Superman: Ultimate Flight at Six Flags Discovery Kingdom has its entire station covered, along with the launching LSMs. This is to help maintain the parts and shield them from the elements, and I do hope that the sun in the next few months doesn't damage the ride. 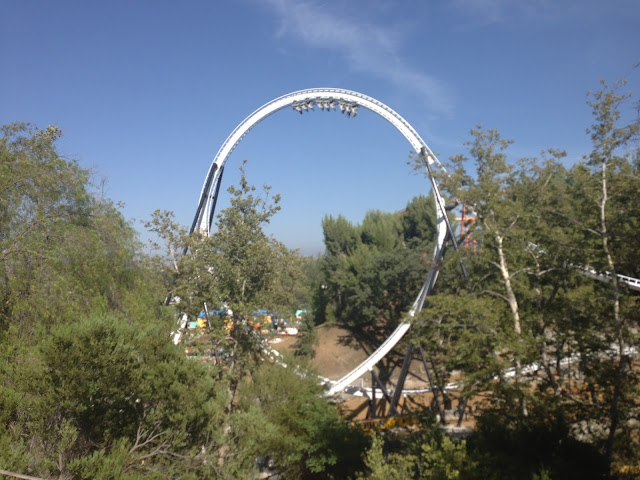 After a quick safety check in the station, riders are launched right out of the station at 70 MPH into the first element, the world's tallest vertical loop at 160 feet. It breaks the current record of the 145 vertical loop from Superman: Krypton Coaster at Six Flags Fiesta Texas. The car seems to just barely clear the loop, as it slows almost to a crawl in the center. The feeling you get at the top is incredible, as you actually come up and off your seat and are hanging from your legs for almost a second! 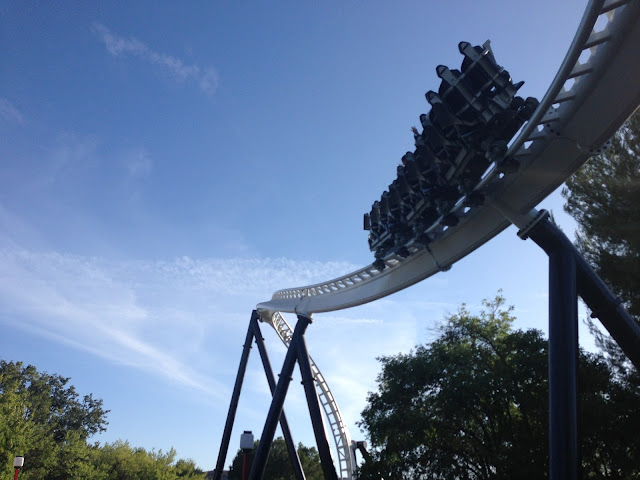 After exiting the loop and banking right and left in 2 high speed curves, you cross the Superman plaza and dive down into the old Metro tunnel. 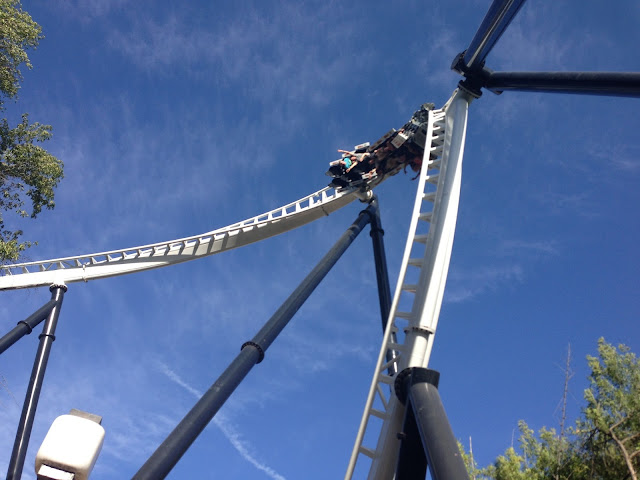 After diving down into the tunnel, the train comes to a stop. You're launched backwards and back up to the top of the dive inversion, then all the way back down through the tunnel where you once again accelerate to 70 MPH. 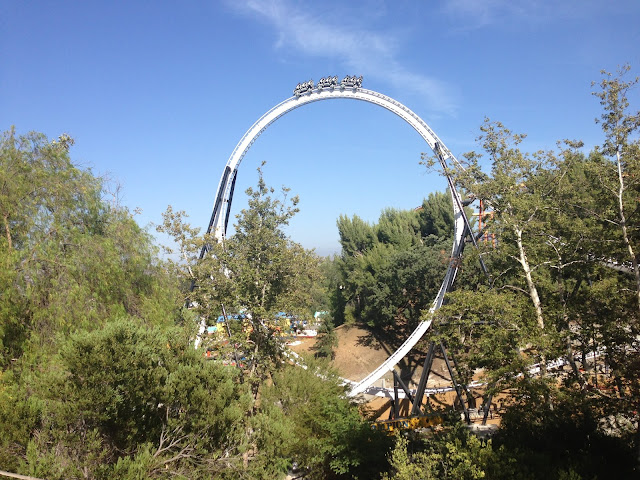 After a hard bank to the left, the train crests up and over the loop. Most are saying that you experience no airtime on the hill, though I might add that I rode the coaster in almost every row and you surprisingly get a small second of air in the very front row. It's barely considered airtime, but it's something. As you descend the top hat, you go vertical when brakes start to slow the train down. This gets you by surprise and throws you around in your seat...Awesome! 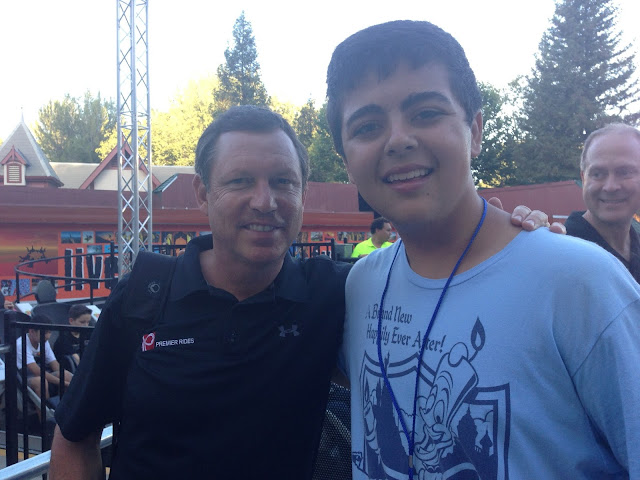 Look who I ran into...Premier Rides President and CEO Jim Seay! He waited in line with the rest of us to ride, and was very humble to talk to! I congratulated him and his team with the success of Superman: Ultimate Flight from last year, and now Full Throttle! 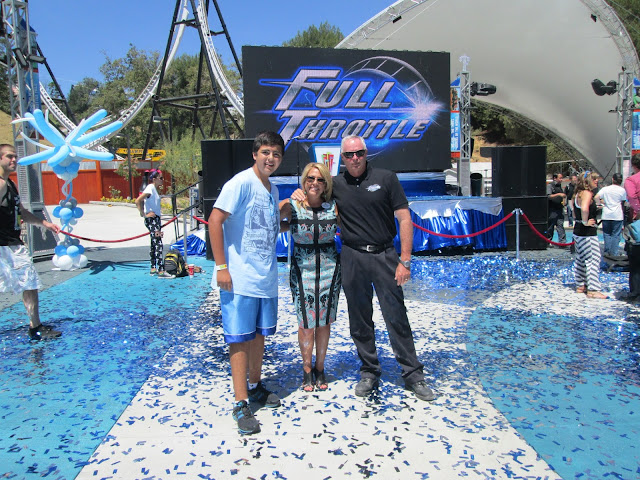 Also got a great shot with the design team on Six Flags Magic Mountain's end, Bonnie Rabjohn and Tim Burkhart! They were proud of Full Throttle's outcome as well!

Full Throttle is truly another one-of-a-kind coaster from Premier Rides that Park Guests will be lucky to have. Having the largest vertical loop, bringing back the old metro tunnel, and the design of the Double Spine track really makes this ride more than a "One Trick Pony". I have to be honest, the original concepts for the ride did seem a bit gimmicky. But I guess that was better, because Full Throttle blew my expectations away! It actually became more fun the more times I rode it, as the third and fourth times you start to realize what's happening a bit more and it becomes more enjoyable! It's a great coaster that fits nicely with Magic Mountain's already impressive ride portfolio, and is definitely worth the trip to the park to take a spin!