May 01, 2013
Welcome to Theme Park Overload! Today, I had the pleasure of heading down to California's Great America for a commercial shoot for their new GCI wooden coaster Gold Striker! Throughout 3 hours, I got 11 rides in! I'll tell you where the airtime is, what the ride "rides" like, and the best moments during the 3,000 ft long,  10 stories high, 54 MPH journey through the Gold Mines!

So you can get a feel for the ride's MASSIVE footprint, check out some off-ride HD video from the coaster, yours truly from TPO!

Now, let's get into the ride itself. After boarding, the train dips down to the right in a diamond-like spiral to reach the lift hill. The turn is surprisingly tight and even gives you slight airtime! After you climb the 108 foot hill, the train becomes encased in a full "mine shaft". Basically a long tunnel over the drop (the longest tunnel for an initial drop on a wooden coaster at 174 ft long) though the tunnel brings some pros and cons. If you're sitting in the very front row, the tunnel adds value to the ride, as you get a full view of the drop down enclosed below. The downside, the tunnel doesn't add that much to the ride if you're seated elsewhere. Because of the design, the chain link pulley extends too far into the tunnel. Meaning towards the back of the train, as you crest the lift into the drop, it generally whips you over the edge into the drop down the hill. In this case, not so much. But after you pick up some speed and reach the ground, you see why the ride really "strikes gold". 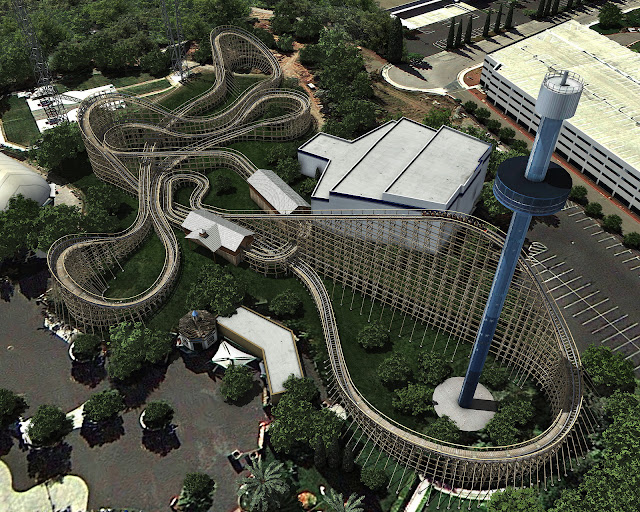 Here's a layout of the ride, without the tunnel over the drop (The tunnel was added on later in the project)


The train starts to hit its max speed of 54 MPH, and the coaster is designed to stay low to the ground so you can feel the acceleration. After a pretty powerful bunnyhop, it makes a hard 80 degree bank to the right, really throwing riders out of their seat and even a little airtime. Dropping back down, it then banks to the left in a "drumstick" turn. The coaster surprisingly maintains its speed during the element. After dropping back down with another bunnyhop, it reaches another banked turn to the left, which can be seen at the entrance of the ride. After reaching the ground at an impressive speed, the coaster's doubtedly best element happens.

The coaster starts traveling straight, and goes up a "double up" hill. Basically, there are two mini hills that make up one large hill. This catches you off guard, and before you realize what happened  the coaster banks hard to the left throwing everyone out of their seats (in a good way). After another slight bank to the left, the coaster reaches the brake run. A total of 14 airtime moments are experienced during the ride, in basically every seat!

Gold Striker is a stunning wooden coaster, and definitely needed at Great America. This is the park's first "major" ride in a while, and is sure to get the park back on the map! Definitely take a spin on the coaster if you can, as it's a lot of fun and great for families who have children at 48" and not tall enough for the 54" rides. Kudos to you, Great America and GCI (Great Coasters International) you've got a great coaster on your hands. Make sure to "Like" TPO on Facebook to get exclusive content and live updates from the park (If you follow the page, you would've already seen photos from the ride and been updated about the video first!) www.Facebook.com/ThemeParkOverload My name's Nicholous, and Thanks for Reading! 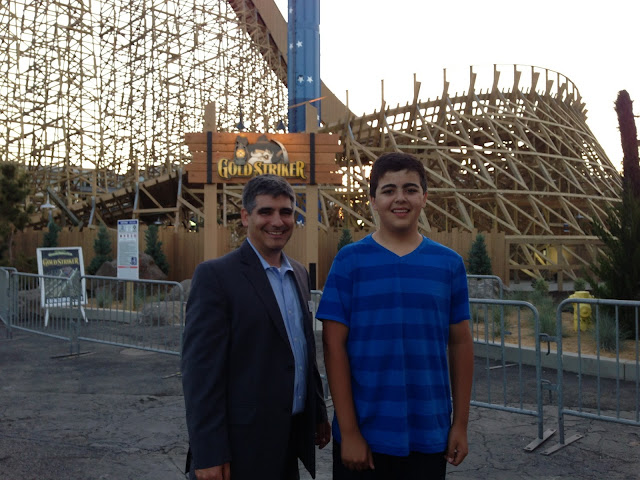 Special Thanks to Roger Ross over at CGA for putting on a great event!