October 20, 2012
Welcome to Theme Park Overload! I had the opportunity to partake in the "Ghoulish Gathering" Media event held by Six Flags Discovery Kingdom to check out the Fright Fest for 2012! This year's event brought the new Massacre Mine maze attraction! First off, here's a First-Person POV video taken of one of the "Scare Actors" terrorizing numerous Park Guests!

Now, here's a full review, broken down into each specific attraction! 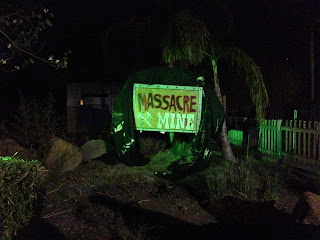 Rating: 7.5/10
This was the park's new maze for 2012. Constructed inside the "White Water Safari" raft ride, you are sent in a dizzying spiral around the raft loading platform for the ride. There was a pretty good amount of actors inside the maze. At one point , you approach an actor on a bungee cord, lunging towards you, making that the highlight! As you exit the maze, you approach one more "extension" of the house. The short end section was very underwhelming and would of been better off not being there at all. But overall, a decent maze!

Rating: 5/10
Unfortunately, the "scrapyard" failed to deliver the Six Flags quality we'd expect. Located next to the park's V2 coaster, it utilizes an actual "scrapyard" area of the park where spare parts are kept for storage. Experiencing it both in the day and night time, the overall product definitely benefits from darkness.  Lacking overall theming and timing of the actors, it was the straggler of all the mazes. Think of it as a glorified scare zone. If you have some extra time to kill, check it out. 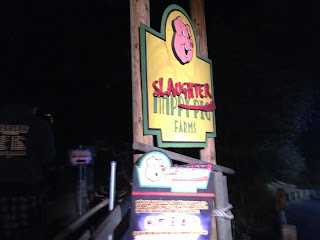 Rating: 8/10
Located throughout the park's old 4D Theater, the Pig Farm delivered! Having the most special effects of all the mazes, it all went together like a well-oiled machine! The maze benefitted from the old pathways the 4D Theater used before it's sudden closure at the end of the 2007 season. The highlight was in the "freezing" chamber, where an incredibly detailed prop of a frozen human scared almost everyone. The attraction also had the best makeup for the actors out of all the mazes. Great maze, check it out!

Rating: 10/10
One word, perfection. Located inside the park's Shark Exhibit, this maze is easily the best out of them all. It captures all of the fundamentals of a good maze: Theming, Actors, and the Art of Surprise  The actors were at their best, actually interacting with the guests! (For Example, in our  group we yelled to one of the people with us "Come On Dennis!" The actors started echoing "Go, Dennis, Go" as we made our way to the next scene) This is definitely a top notch maze, not to be missed by any visitors!

Rating: 8.5/10
Located inside the Bumper Car attraction, this manor was a pretty frightening experience! With good attention to detail, the highlight here was also the actors! The most frightening moment of the night came from here, where you see a bloody girl at a desk peering into a mirror. It turns out this is an illusion, as the girl turns around from her desk, and the reflection inside the mirror is another actor jumping out towards you. The reason the score was a little lower is because the second time we went through, the maze was "understaffed" of actors. The best scene (the mirror) along with a few other elements were all altered, some with no actors in the area at all. Still, a very frightening and illusion-filled experience!

That's all for now from Theme Park Overload! Special Thanks to Park President Dale Katzel, Nancy Chan, and Jennifer Goza for putting the event together! Join the conversation on our Facebook page to be alerted of other AWESOME posts like this! www.Facebook.com/ThemeParkOverload My name's Nicholous, and Thanks for Reading!