Welcome to ThemeParkOverload.net! Today's news will be seperated into 2 parts, both about new rumored coasters for California's Great America and the Santa Cruz Beach Boardwalk!

The city of Santa Clara has just approved a new permit for Great America, and it happens to be about a new Wooden Coaster going into the park for 2013 (Which you can read by clicking Here. The Permit describes in quote "Architectural Review of revised plans for a wood
coaster ride structure" and shows its status as being approved.
This doesn't come as much of a surprise,
as back in 2009 a coaster was going to be built that year.
But delay after delay started coming,
and months later they announced the ride was cancelled.
Below are shots
of what the old roller coaster was going to look like.

Once again, these were the plans for the OLD coaster, and even though the new one rumored will be wooden, it doesn't necessarily mean they will be using the same design. That doesn't mean they won't be using an updated design though. More info to come as the project unfolds.

The Santa Cruz Beach Boardwalk has confirmed the removal of the old Hurricane coaster and says it will put in a new coaster for 2013. The president of the park Marq Lipton goes on to say “Fans of the Boardwalk will be delighted with the exciting new ride we have planned for 2013”. The rumor is they will be putting in a new Gerstlauer Euro-Fighter model. Now you're probably confused on what I just said, so let me explain. Gerstlauer is a ride manufacture that makes a variety of Flat Rides and Roller Coasters. Good examples of rides they have build are the "Pandemonium" coasters at a few Six Flags nationwide. Euro-Fighter is a type of roller coaster model they build. They seat about 4 people per car, usually preform multiple inversions, and almost always feature completely vertical 90 degree lift hills. Here is a picture of a Euro-Fighter's lift hill. 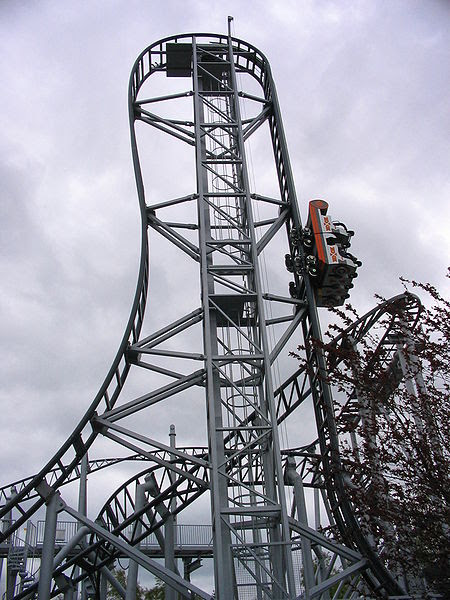 This would be a perfect fit for the Boardwalk for a few reasons. First, the Euro-Fighters require very little space, compared to rides similar that have a larger capacity but take up more room. The old Hurricane coaster is located on a relatively small area of land, further restricting what new coaster could replace it. Second, because this is something the Boardwalk has never had within the park and could really use. The only coaster in the park, after the removal of the Hurricane, will be the Historic "Giant Dipper". Now, not implying that this is a bad ride, but this old wooden coaster has been in the park since 1924, and you won't see very many thrill seekers coming all the way to the Boardwalk for just one good coaster (The average Six Flags Park has 8 coasters). Plus, this would be the first roller coaster in the park to ever have inversions, otherwise saying the first to go upside down. The official announcement will come in late summer, so fingers crossed! If you're a fan of the Hurricane, you still have until September to get your last rides!

My Name's Nicholous, and thanks for reading today's news!

P.S. Check out this video I made when I visited the Santa Cruz Beach Boardwalk. Within the video, I also ride the Hurricane (Probably for the last time)!