When we first arrived we could see very few cars in the parking lot. It was predicted to rain, so that scared away many potential visitors. We arrived at the park, and barley waited in any line to get in. The new graphic cover for the maps looked pretty sweet with the new Superman art! 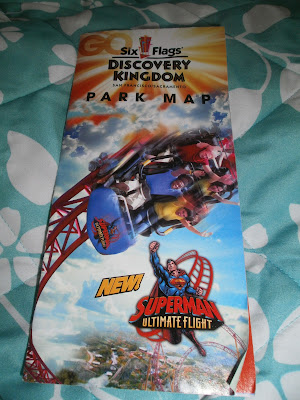 We first headed to Medusa, where I was able to ride it back-to-back in under 15 minutes! What I realized from looking at the park's signage is they failed to remove the signs for "Pandemonium". Even while walking around I could hear people stating they "wanted to go ride the Tony Hawk ride". It is removed from the maps, but not the signs. SFDK was closed for over 2 months, and had plenty of time to fix things like that. 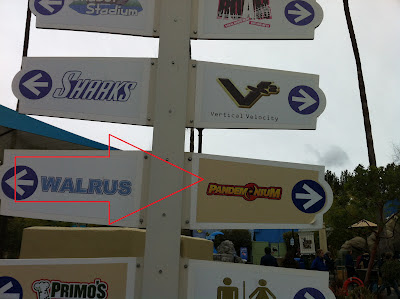 Then I decided to go ride the "woodie" ROAR. When I arrived I was informed they were only running 1 train that day, ON OPENING FRICK'IN DAY! After waiting for a few minutes in a dead-locked line, the ride broke down. The funny thing is that the ride literally steps from ROAR, the impulse coaster V2, had no line. This is a shuttle coaster, meaning it only can have  a max of 1 train on the track at a time. This is usually the longest line of the park, but today it had no line. I was able to ride it twice. Check out a POV Video of the ride that I shot!
After riding V2, I decided to check out construction on the new Superman Ultimate Flight coaster going in this spring at the park. I was stunned to find that they haven't even put up the footers (concrete support) for the coaster yet! They still had some of the old Pandemonium cars laying around, which should be at Six Flags Mexico with the rest on the ride by now! I shot some HD footage of  the construction, basically by sticking my camera straight up the safety barriers!
Finally I went over to Oasis Plaza to try out Kong. As I said in one of my earlier posts
(Read the earlier post Here) The Vekoma SLC coaster Kong was getting much needed TLC over the off-season to the wheels. Kong is a very bumpy ride, and this was done in an attempt to make it a smoother experience. I can officially tell you that this was a COMPLETE WASTE OF TIME!!! Kong was just as painful as the time before, and I saw absolutely NO improvement to the ride experience at all. Kong is like walking through an dark alley, expecting to get in a small fight, and then being beat up by a pack of hard core bikers. I know that may sound a little extreme, but that's just the motto of the ride's manufacturer Vekoma :) After taking a quick ride on the SkyScreamer, I ran back to ROAR to see if the ride was fixed. But suddenly huge pieces of hail start charging down at park guests. Seeing a whole bunch of improperly trained Six Flags employees running around for protection was the sight I left the park with. Overall, I was a little but unimpressed with the park. Throughout the day ROAR, Boomerang, SkyScreamer, VooDoo, Kong and more broke down during the day. I felt like Six Flags was slacking and instead of hiring a few mechanics to do a final check on the rides the day before, they just went with it. Yet the day still managed to be fun, and I'll be returning later in the Spring to ride Superman Ultimate Flight!

If you enjoyed click the Social Media "Share" button below this post, and scroll to the bottom of this page to enter your email to be reminded via email of a new post! My name's Nicholous, and thanks for reading!